You may know Jenny Slate from her comedy shows or indie films, but now you can hear the comedian and actress in a different medium: through the written word.

Jenny and her father, essayist and poet Ron Slate, worked together to write the new book About the House, a collection of stories, essays, and poems about the 1898 Colonial home in Milton that Jenny grew up in and her family still owns.

“Everything Jenny wrote delighted me,” Ron said, “and I wasn’t surprised because I knew that there are stories we tell over and over again.”

The book covers the make-believe TV shows Jenny used to write scripts for as a child, Jenny’s feminism and the Slates’ strong female household, the ghosts the family claims to have seen around the home throughout the years, and more.

“You’ll hear [Jenny’s] voice as a stand-up comic,” Ron said. “I can’t compete with Jenny in comedy, so I didn’t even try.”

Ron said that there were similarities in their writing styles and the stories they wanted to tell.

“Jenny and I have always wanted to do a project together,” he said. “We were talking with the [Concord Free Press] and thought we could try to put some thoughts together on our house. [It is] really a book about living in our house.”

The Concord Free Press is not your typical publishing company. Jenny and Ron wrote the book for free, and the publishing company gives all their books away to readers with the caveat that the readers will then do something generous in exchange (e.g.,  donate money to a charity) and pass the book on to someone else to enjoy.

The Concord Free Press also only distributes a small amount of each book they print. Over the course of the next few weeks, they will release about 3,000 copies in total of About this House, which debuted on Tuesday.

“Jenny and I wrote it specifically to participate in the Concord Free Press model,” Ron said. “We didn’t do it to glorify the house or point attention to ourselves; it’s about getting the book around and triggering giving.”

Incidentally, Ron’s father-in-law gave the Milton house on which the book is based to Ron and his wife, Nancy, as a gift.

“We have had the privilege of living here, and in the spirt of that, we wanted to pass that along in some way,” Ron said. “The book is about that feeling of wanting to share something and wanting to give something back.” 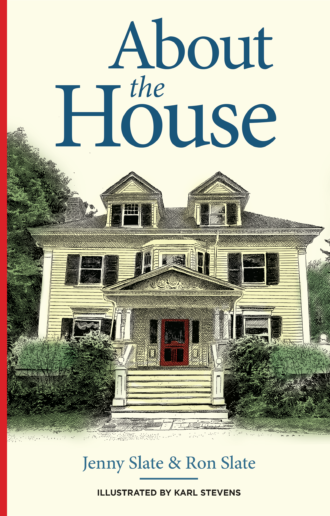 In the excerpt below, Jenny reflects on her messy childhood bedroom:

“After I make a mess, I am shocked by how strong, uncontrolled, furious and wild that mess is. After I make the mess, I can see how easily I could have avoided it. I can see the little bad spirit thing, like a rock with legs and a pointy smile, punching my brain in the stomach over and over again until it barfs pain into my reality, but only I can smell the barf, nobody else. And when I flip out and say, ‘Help! There’s barf on my life!’ nobody knows what to do. They can’t see it or smell it, the only thing they can sense is me, and I have become the mess itself. They can’t see my fear, they can only see my outside life, which seems essentially good. So what’s wrong with me then, they wonder. When I am in the process of making the mess, I often don’t notice the signs, and I don’t understand its depth. I also am in the snake-like grip of fear and anxiety, and I’m weak and woozy and all amped up, in a stupor-trance because I have no fresh air, and I am convinced that I must make the mess, and then, even worse, announce it.

When I lived in my first room in the house, the room by the stairs, I was very, very messy. But I was a child, so really how messy was I? Sometimes I think that about myself now, that I’m very messy, but then I reason, Sure, but you’re also a human woman and there’s a lot going on. But I still can’t ever really give myself a break. I feel shame about my messiness. My family used to accuse me of leaving a trail of messes around our house. My father called it The Jenny Walk which, even as a child, I found highly offensive and useless in terms of getting me to get my act together. So, in the first room that I lived in, because of my nature, there must have been a bit of a mess. But what could it have been? I never brought food up there, there were no plants that could have toppled over and spilled actual dirt, no pets in our house, and how much stuff, (even if all of my stuff was out and scattered), how much stuff could there have been? I just can’t imagine it being that bonkers in there, but one day my mother told me that I absolutely had to clean my room, and that I was not going to leave that room until it was clean. And then she shut the door to the room, which was a scary and unheard of thing to do. I was just in there. Just me and the mess.

When I lived in my first room in the house, the room by the stairs, I was very, very messy.

I truly hate being shut out. I hate how being shut out often seeps in slowly, and you have to just sit there while the eventuality of it laps at your ankles until it finally fills up and fills your life up and then there you are, shut out. Killed. Being shut in the room felt the same. Shut out of the rest of the house, shut in the room with my mess. I remember that I was wearing a pair of white underpants that my mother had used fabric markers to write my name on. They said Jenny on the butt, in a circus-type font, (handwritten), and she’d also drawn some balloons and maybe some hearts or something like that. I think I really did go ahead and clean the room, but at some point I must have had to use the bathroom. There’s absolutely no way that I took my mother at her word and that I really thought that leaving the room was forbidden under any circumstances. I knew that at least I could have poked my head out and yelled, Mom? Can I go to the bathroom? But even that seems extreme. I always knew that I could go to the bathroom. I knew. My mother was, at times, very fed up with us, but she was never cruel or scary. There was nothing about her that actually made me feel that she meant the more strict things she said. I honestly think that, even as a new person on this planet, I understood the emotions behind my mother’s different commandments and punishments and griefs. I understood, for the most part, how to take it all at its face value.”

This excerpt is copyright 2016, Ron and Jenny Slate. Used with permission of the authors.

Visit Get your clubs ready, Topgolf is coming to Fenway Park 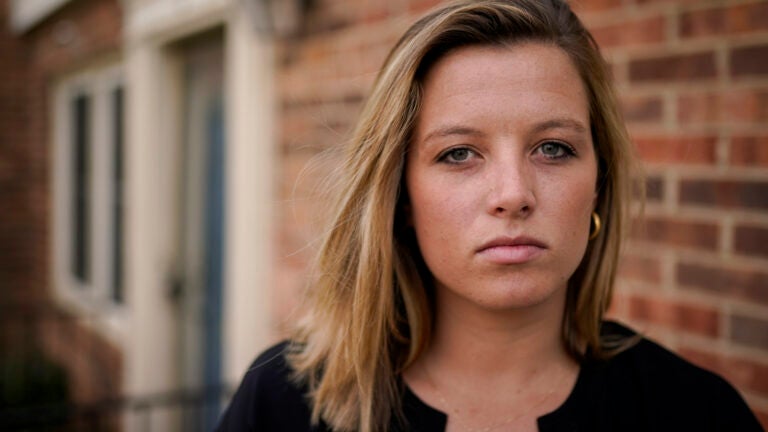 Her sexual assault report went nowhere. Years later, the accused man wrote to her: 'So I raped you.'