During a ceremony and dinner benefit at Cipriani Wall Street when those honored had roots throughout the world, from Peru to Japan, Elizabeth Acevedo’s “The Poet X” won for young people’s literature, and Yoko Tawada’s “The Emissary,” translated by Margaret Mitsutani, won for translation, a category newly revived.

Nunez’s book tells of a woman mourning the death of her literary mentor and of her bond with the dog he left behind. It is a story, in part, of connection and distance. And Nunez, author of such previous novels as “Salvation City” and “The Last of Her Kind,” noted in her acceptance speech that she didn’t seek community when she became a writer, but unexpectedly found it.

“I thought it was something I could do alone and hidden, in the privacy of my own room,” she said. “How lucky to have discovered that writing books made the miraculous possible, to be removed from the world and be part of the world at the same time.

“And tonight how happy I am to feel a part of the world.”

Nunez’s novel was chosen from among five fiction works set mostly in the present, and touching with lyricism and intensity upon everything from race and sexuality to climate change. Finalist Jamel Brinkley, author of the story collection “A Lucky Man,” told The Associated Press earlier Wednesday that “Our lives vibrate with uncertainty and mystery, with paths precariously taken or not taken, and they are often under threat by one thing or another. Many of our lives are under threat by design.” Lauren Groff, a nominee for the story collection “Florida,” said that “In these frightening and fraught times, I had to come into the full certainty that art was meaningful enough for me to devote my heart to it.”

“Parks and Recreation” actor Nick Offerman served as master of ceremonies and soon learned that among the publishing community you’re more likely to get cheers with tributes to reading than with double entendre about “thumb drives.” One popular line: “In an age when our First Amendment rights and truth itself are very much in peril, books remain the ultimate repository of creative ideas and irreplaceable knowledge.”

Honorary medals were given to novelist Isabel Allende and to Doron Weber of the Alfred P. Foundation for its support of books about the sciences. Weber was introduced by “Hidden Figures” author Margot Lee Shetterly, one of hundreds the foundation has helped support. Referring to concerns new and old, Weber called for the protection of “nonpartisan forms of knowledge” and the continued dialogue between art and science.

“We continue to invite scientists and humanists to engage one another,” he said, calling them “two side of the same human impulse to understand and meaningfully describe the world around us and inside us.”

Allende, author of “The House of the Spirits” and many other best-sellers, is the first Spanish language writer to receive an honorary National Book Award medal. A native of Peru, she has lived in the U.S. since the 1980s and for years was a political refugee from Chile during the dictatorship of Augusto Pinochet.

“Although I am critical of many things in this country I am proud to be an American citizen. I have received much more than I ever dreamed of and I have been offered the opportunity to give something back,” she said.

Allende said she has been an outsider, in transit, for much of her life. She spoke of her award as a kind of deed of ownership, a sign that she is home.

“Maybe I’m not an alien after all. Maybe it’s time to plant my roots and relax,” she said. “Maybe I’m not going anywhere, anymore.”

The book awards are presented by the nonprofit National Book Foundation. Judges, who include writers, critics and other members of the literary community, chose from more than 1,600 books submitted by publishers when considering the awards. Winners in the competitive categories each receive $10,000. In translation, the prize money is divided between the author and translator. 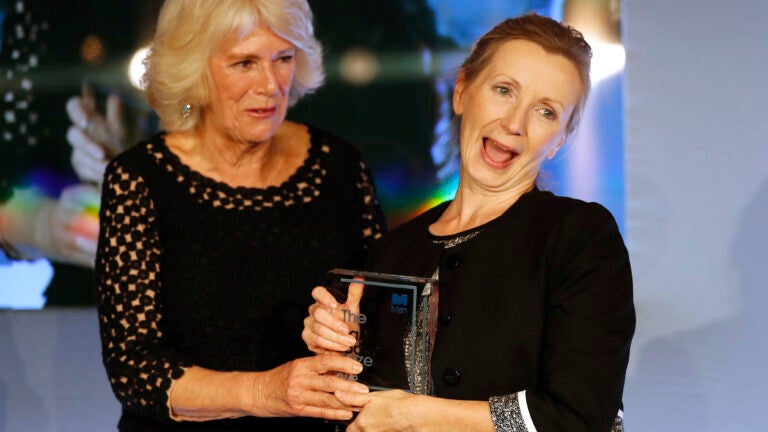