NEW YORK (AP) — Beverly Cleary, the celebrated children’s author whose memories of her Oregon childhood were shared with millions through the likes of Ramona and Beezus Quimby and Henry Huggins, has died. She was 104.

Cleary’s publisher HarperCollins announced Friday that the author died Thursday in Carmel Valley, California, where she had lived since the 1960s. No cause of death was given.

Trained as a librarian, Cleary didn’t start writing books until her early 30s when she wrote “Henry Huggins,” published in 1950. Children worldwide came to love the adventures of Huggins and neighbors Ellen Tebbits, Otis Spofford, Beatrice “Beezus” Quimby and her younger sister, Ramona. They inhabit a down-home, wholesome setting on Klickitat Street — a real street in Portland, Oregon, the city where Cleary spent much of her youth.

Among the “Henry” titles were “Henry and Ribsy,” “Henry and the Paper Route” and “Henry and Beezus.”

Ramona, perhaps her best-known character, made her debut in “Henry Huggins” with only a brief mention.

“All the children appeared to be only children so I tossed in a little sister and she didn’t go away. She kept appearing in every book,” she said in a March 2016 telephone interview from her California home. 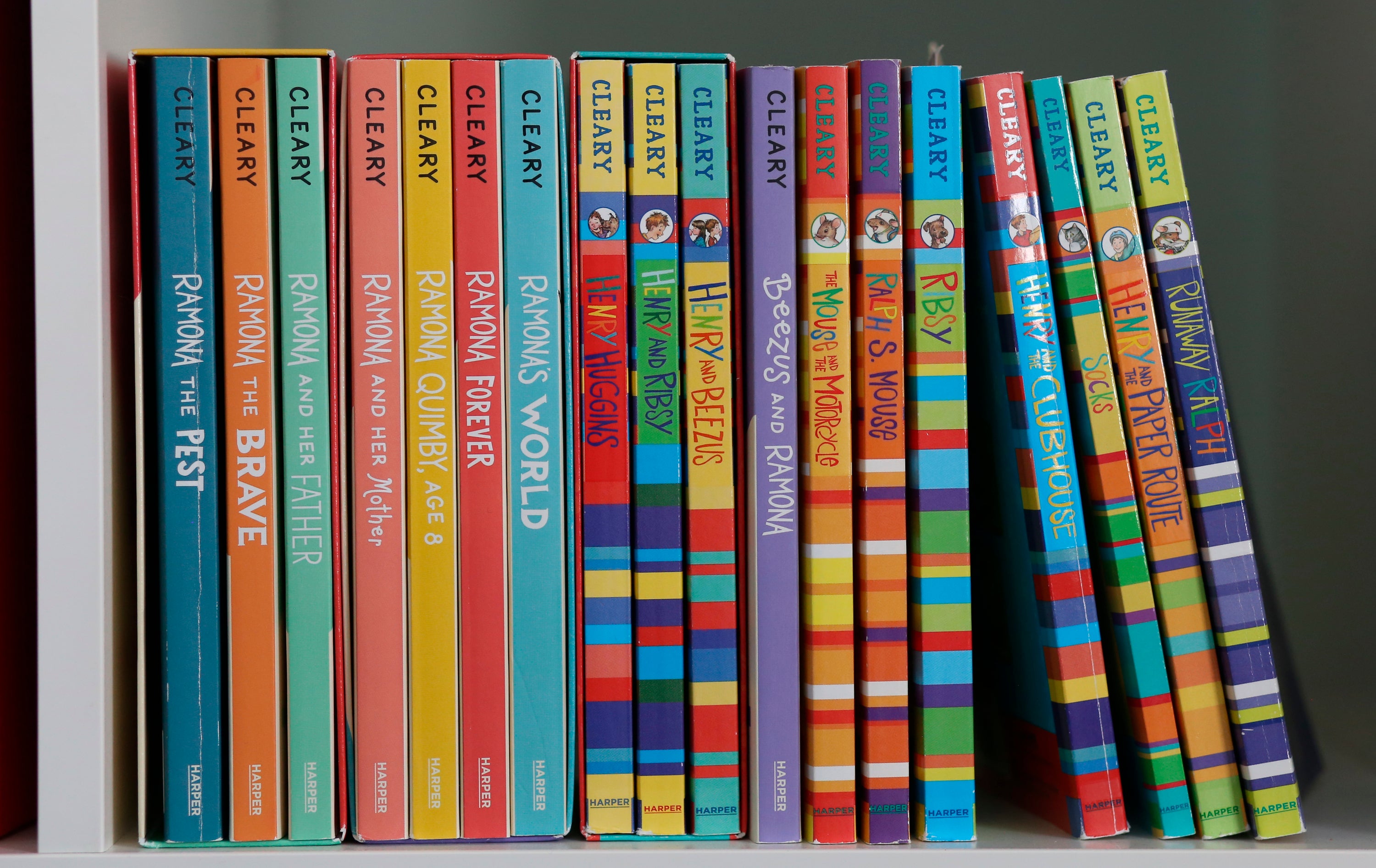 A collection of books by Beverly Cleary.

Cleary herself was an only child and said the character wasn’t a mirror.

“I was a well-behaved little girl, not that I wanted to be,” she said. “At the age of Ramona, in those days, children played outside. We played hopscotch and jump rope and I loved them and always had scraped knees.”

Cleary wasn’t writing recently because she said she felt “it’s important for writers to know when to quit.”

“I even got rid of my typewriter. It was a nice one but I hate to type. When I started writing I found that I was thinking more about my typing than what I was going to say, so I wrote it long hand,” she said in March 2016.

Although she put away her pen, Cleary re-released three of her most cherished books with three famous fans writing forewords for the new editions.

Actress Amy Poehler penned the front section of “Ramona Quimby, Age 8;” author Kate DiCamillo wrote the opening for “The Mouse and the Motorcycle;” and author Judy Blume wrote the foreword for “Henry Huggins.”

Cleary, a self-described “fuddy-duddy,” said there was a simple reason she began writing children’s books.

“As a librarian, children were always asking for books about `kids like us.′ Well, there weren’t any books about kids like them. So when I sat down to write, I found myself writing about the sort of children I had grown up with,” Cleary said in a 1993 Associated Press interview.

“Dear Mr. Henshaw,” the touching story of a lonely boy who corresponds with a children’s book author, won the 1984 John Newbery Medal for the most distinguished contribution to American literature for children. It “came about because two different boys from different parts of the country asked me to write a book about a boy whose parents were divorced,” she told National Public Radio as she neared her 90th birthday.

Cleary ventured into fantasy with “The Mouse and the Motorcycle,” and the sequels “Runaway Ralph” and “Ralph S. Mouse.” “Socks,” about a cat’s struggle for acceptance when his owners have a baby, is told from the point of view of the pet himself.

She was named a Living Legend in 2000 by the Library of Congress. In 2003, she was chosen as one of the winners of the National Medal of Arts and met President George W. Bush. She is lauded in literary circles far and wide.

She produced two volumes of autobiography for young readers, “A Girl from Yamhill,” on her childhood, and “My Own Two Feet,” which tells the story of her college and young adult years up to the time of her first book.

“I seem to have grown up with an unusual memory. People are astonished at the things I remember. I think it comes from living in isolation on a farm the first six years of my life where my main activity was observing,” Cleary said.

Cleary was born Beverly Bunn on April 12, 1916, in McMinnville, Oregon, and lived on a farm in Yamhill until her family moved to Portland when she was school-age. She was a slow reader, which she blamed on illness and a mean-spirited first-grade teacher who disciplined her by snapping a steel-tipped pointer across the back of her hands.

“I had chicken pox, smallpox and tonsillitis in the first grade and nobody seemed to think that had anything to do with my reading trouble,” Cleary told the AP. “I just got mad and rebellious.”

By sixth or seventh grade, “I decided that I was going to write children’s stories,” she said.

Cleary graduated from junior college in Ontario, California, and the University of California at Berkeley, where she met her husband, Clarence. They married in 1940; Clarence Cleary died in 2004. They were the parents of twins, a boy and a girl born in 1955 who inspired her book “Mitch and Amy.”

Cleary studied library science at the University of Washington and worked as the children’s librarian at Yakima, Wash., and post librarian at the Oakland Army Hospital during World War II.

Her books have been translated into more than a dozen languages, and inspired Japanese, Danish and Swedish television programs based on the Henry Huggins series. A 10-part PBS series, “Ramona,” starred Canadian actress Sarah Polley. The 2010 film “Ramona and Beezus” featured actresses Joey King and Selena Gomez.

Cleary was asked once what her favorite character was.

“Does your mother have a favorite child?” she responded.

He was swept down a sewer pipe: ‘I just let the water take me’