September is going to be thrilling for the Boston.com Book Club, because we’re going to be reading not one, but two of local author and journalist Hank Phillippi Ryan’s books. “Her Perfect Life,” Ryan’s 13th novel, comes out in the middle of this month. If you’re like us, you don’t like to wait for things, so this month we’re also going to read Ryan’s 12th novel, “The First to Lie,” which came out in paperback in January.

To say that Ryan is a decorated journalist and author would be a bit of an understatement. Ryan has won 37 Emmy Awards for her work as an investigative reporter, and has won the Edward R. Murrow Award 14 times. That success as a journalist has translated smoothly to her success as a writer. With her first 12 novels, she has won several coveted awards for mystery writers, such as the Agatha Award (five times), the Anthony Award (four times), and the Mary Higgins Clark Award. Ryan is the only writer to win the Agatha Award in four different categories, a testament to her range as a writer.

Ryan is not resting on her laurels. “The First to Lie” was nominated for the Mary Higgins Clark and Anthony Award, and “Her Perfect Life” already has earned two starred reviews. Both are standalone novels whose protagonists are female journalists, and each float in on a raft of praise not just from awards committees and review houses, but from Ryan’s peers – authors like Sarah Pekkanen, B.A. Paris, Angie Kim, Samantha Downing, Julie Clark, and many others have praised one or both novels.

In “The First to Lie,” Elle Berensen is enjoying her first assignment for a Boston startup TV news station, investigating a touted drug by a local pharmaceutical company that may leave women barren. In addition to misinformation from the company, Elle has to contend with her overzealous assistant whose lies may bring down all of her good reporting, security agents from the company who maybe broke into her apartment, and much, much more.

In “Her Perfect Life,” which debuts on Sept. 14, decorated reporter Lily Atwood has a new anonymous source who is feeding her and her producer tips, but things take a turn for the worse when the source starts investigating Lily herself. At the same time, the father of Lily’s seven-year-old daughter shows up out of the blue, when he wanted nothing to do with the child in the past. And in the middle, possibly, impossibly, is Lily’s sister, who vanished 25 years ago without a trace.

Joining Ryan to talk about both books with a focus on “Her Perfect Life” will be Kym Havens, the marketing and events (and newsletter!) manager of An Unlikely Story Bookstore and Café in Plainville, Mass. Havens has been a part of An Unlikely Story since it opened in May 2015, and has been the marketing and events manager there since 2018. A bookseller through and through, before coming to An Unlikely Story, Havens spent time working at both Hearts and Stars Bookstore and Wellesley Booksmith (before it became Wellesley Books). Havens is also a big supporter of Ryan and made “Her Perfect Life” her most recent staff recommendation, so we know the two will have a tremendous conversation.

An Unlikely Story is owned by Julie Kinney and her husband, famed children’s author Jeff Kinney, whose “Diary of a Wimpy Kid” series now has sales figures that rival McDonald’s hamburgers. With over 250 million copies sold across 15 titles (the 16th – “Big Shot” — is coming in October) plus a few spin-offs, the only book series that seems like a decent bet to stay ahead of “Wimpy Kid” in sales is the Harry Potter series. But it’s certainly not out of the question that Greg Heffley, Rowley Jefferson and Co. will rise to the top someday. Having such a renowned author with a bookstore right here in our backyard has been a boon for independent bookstores in the region — that it’s expertly run by a team of dedicated booksellers, even more so.

Join the Boston.com Book Club Wednesday, September 28 at 6 p.m. for a virtual discussion with An Unlikely Story‘s Kym Havens and featured guest author Hank Phillippi Ryan on “The First to Lie,” which came out in paperback in January, and her new novel “Her Perfect Life,” to be released on Sept. 14.

GIVEAWAY 🎉
Publisher Forge Books is raffling off 10 free copies of Ryan’s newest thriller “Her Perfect Life” to Boston.com readers. RSVP to the event and submit a discussion question for your chance to win! (Open to U.S. or Canada residents only.) 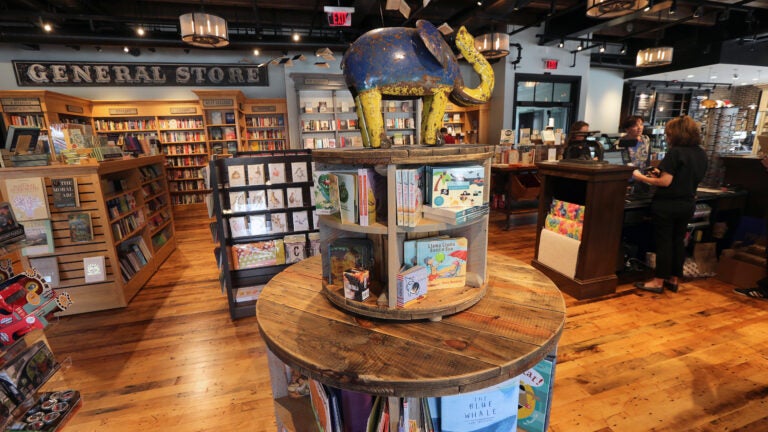 Looking for ways to relax outside of work? Find a bookstore.