Nathaniel Philbrick has written a dozen books on American history, often focused on maritime matters, New England, or New England maritime matters. His most recent, “Travels With George: In Search of Washington and His Legacy,” came out on Sept. 14. It starts with a simple question — does George Washington still matter? It’s a question that led him on a journey through the former 13 colonies, and it’s one we’ll explore this month, as “Travels With George” is our November Book Club pick.

Even if you’ve never read any of Philbrick’s books, you may know who he is because his book “In the Heart of the Sea” — which won the National Book Award in 2000 — was turned into a movie that was directed by Ron Howard and starred Chris Hemsworth, Cillian Murphy, Brendan Gleeson, and Tom Holland. Many of his books, a catalog that includes “Mayflower,” “Bunker Hill,” “The Last Stand,” “Valiant Ambition” and “In the Hurricane’s Eye,” have become New York Times bestsellers. George Washington factors into more than one of these books, including “Valiant Ambition,” which focused on the relationship between Washington and Benedict Arnold.

Where “Travels With George” departs from these previous books is that it brings Revolutionary War-era history into the present. Philbrick traveled to each of the 13 former colonies with his wife Melissa and their dog Dora, to help see for himself Washington’s history and how things have and have not changed in the 229 years since. With America’s founding fathers under renewed scrutiny, particularly over whether they owned slaves — as Washington did — it was time for a fresh look at his, and the country’s, history.

The book earned praise from plenty of sources, including The Boston Globe, The New York Times, Wall St. Journal, Publishers Weekly, Kirkus Reviews, Booklist, The Washington Post, and Smithsonian. Smithsonian said, “drawing unnerving parallels to the nation’s current political landscape, the writer shows how the lessons taught by the ‘father of our country’ are still relevant today.” The Globe called the book “quintessential Philbrick,” and “a lively, courageous, and masterful achievement.”

Joining Philbrick for this conversation will be Tim Ehrenberg from Mitchell’s Book Corner on Nantucket. Philbrick lives year-round on Nantucket, and Mitchell’s is his local indie, so this is a natural fit. Tim is the marketing director for Nantucket Book Partners, which is the umbrella group for Nantucket’s two indie bookstores — Nantucket Bookworks and Mitchell’s. He also operates Tim Talks Books, where you can see his author talks, book recommendations, and more, and writes a monthly book column for N, Nantucket’s magazine.

Mitchell’s Book Corner celebrated its 50th anniversary in 2018. Opened by the Havemeyer family, who after years of summering on Nantucket moved there and opened the bookstore in 1968, continuing to run it until 2008. A few years later, Wendy Hudson, who owned Nantucket Bookworks just a couple blocks away, created Nantucket Book Partners, and the two stores have operated as one ever since. 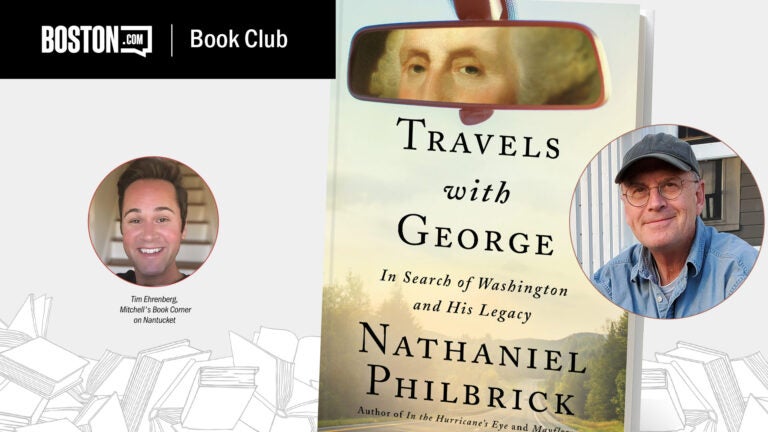 9 takeaways from the 'Travels with George' author discussion