Here are some of the things we can thank Stevie Van Zandt for, according to his new memoir, “Unrequited Infatuations”:

I kid (somewhat), of course. Van Zandt — the longtime E Street Band guitarist, “Sopranos” featured player, star of “Lilyhammer” on Netflix, and architect of about a million other schemes and projects  — would be the first to tell you his role in the above actually may have been minor at best (and in some cases maybe non-existent). Still, in reading the tales of how he became even tangentially involved in so many political and musical matters over his long career, the extent of his influence is sort of beside the point — it’s the journey that’s fascinating.

In fact, “Unrequited Infatuations” is, in the end, a long, winding story of near-misses and not-quite-failures punctuated by the occasional surprise success, all told in Stevie’s unmistakable Jersey patois, replete with F-bombs and excessive capitalization. The writing is loose, natural, and funny, and if you’re familiar with Stevie at all, you’ll hear his unmistakable voice in your head the whole time, whether you have the audiobook or not.

The sheer volume of Van Zandt projects depicted in the book is at once staggering and hilarious, particularly the ones that never saw the light of day. Stevie’s nothing if not self-deprecating; he devotes a whole chapter — aptly titled “Seven Years in the Desert” — to an elaborate series of 1990s efforts that misfired for a variety of reasons mostly beyond his control. (Example: his Quasimodo musical, which was turned town by Meat Loaf and then became untouchable after Disney released its own animated “Hunchback of Notre Dame.” “Nobody heard it,” he declares of his project, in a refrain repeated throughout the chapter about everything from a nascent punk band to a song on the soundtrack for the Hugh Grant movie “Nine Months.”)

Meanwhile, Springsteen — Van Zandt’s lifelong friend and confidante, and the man he’s shared a microphone with, on and off, for more than 50 years — is a decidedly minor character in “Unrequited Infatuations.” We do learn about their time spent together as teen outcasts in New Jersey (Stevie’s pre-age-7 life in the Boston area is sadly unexplored and likely unremembered), and about their three “major fights” — including the previously unrevealed disagreement that led to Stevie quitting the E Street Band in the early ’80s. But the book is ultimately Stevie’s story, not the story of what it was like to watch Bruce ride the rocketship of success.

That he does spend some time discussing his leaving the E Street Band isn’t surprising, though, given that it’s one of the most relatable acts of self-immolation anyone who’s ever made a poor or ill-timed choice can imagine — in Stevie’s case, walking away just before the “Born in the USA” gravy train came into the station, a move that decimated both his pocketbook and his standing with fans.

“Upon leaving the band, I beame persona totally non grata,” Van Zandt writes. “We didn’t publicize any bad blood. Not one negative word from either of us. We just said that I had left to pursue my own career, but I was seen as a traitor by virtually everybody. People felt they had to choose sides. Guess whose side they chose?”

Though he mentions several times that his life “was over” after that decision, he also acknowledges that in many ways it was just beginning — as evidenced by the fact that it comes only midway through the book. First, it leads immediately to Van Zandt’s involvement in the anti-apartheid movement and eventual recording of the “Sun City” charity record that was part of the effort to achieve equality for Black residents of South Africa. It was arguably his most worthwhile endeavor and biggest success, and is outlined here in all its unlikely details (including a “very illegal meeting with the most violent sect of the South African Revolution” that kicks off the prologue).

But his freedom also allowed him to pursue acting as part of his life’s unexpected second act — his sections on “The Sopranos” and Netflix’s “Lilyhammer” are the highlight of the latter half of the book. So much so, in fact, that he might have been better off focusing more on those experiences (especially on “The Sopranos,” arguably the best TV show ever) than on some of his many other detours, too numerous to name or even keep up with. (Producing Darlene Love! Reuniting The Rascals! Writing a song for the Kurt Russell Santa Claus movie! etc.)

There’s also a fair amount of rock history, music theory, and political opinion — complete with a five-page manifesto that he promises to expand into its own book some day — in the book’s almost 400 pages, making for a sometimes meandering reading experience. (You’d be forgiven for skimming.)

But in the end, “Unrequited Infatuations” adds up to an endearingly complete portrait of an immensely likeable artist who clearly wishes he’d made some different choices in life, but who overall seems grateful for the adventures he experienced — particularly one life- and career-affirming one that he ends the book with. Most readers, even those who may not have bought his solo records or even watched “The Sopranos,” will be grateful for the opportunity to experience those adventures along with him. 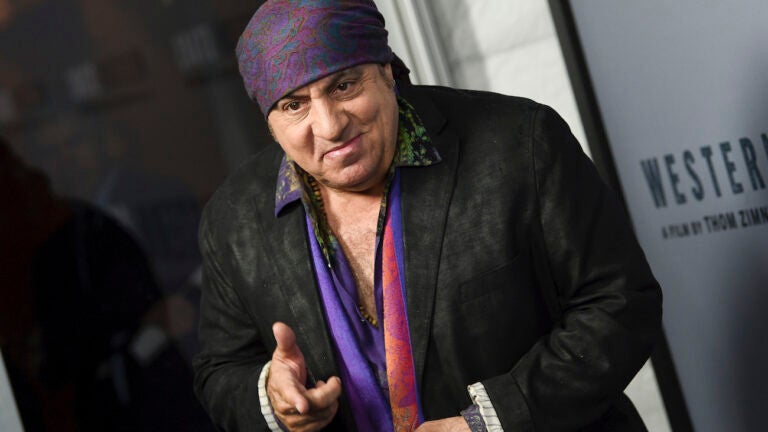