In an interview more than two decades ago, Vladimir Putin described his younger self, with a hint of self-congratulation, as “a hooligan.” When the interviewer asked if he was exaggerating about his tendency to get into brawls as a schoolboy, Putin took offense.

Masha Gessen, a Russian American journalist and Moscow native, recounts this exchange in a 2012 biography, “The Man Without a Face: The Unlikely Rise of Vladimir Putin,” which was praised as “part psychological profile, part conspiracy study” in The New York Times Book Review. To Gessen, Putin’s unabashed description of himself as “a thug” was key to his self-image: someone who could not be bullied, who would lash out unpredictably if he felt slighted and who relished violence.

Understanding Putin and the forces that shaped him has become an urgent global concern, as leaders around the world try to determine his motivations in launching an unprovoked and disastrous invasion of Ukraine, how to best engage with him and how the conflict might evolve.

So far, the military assault appears to be a catastrophic misstep, one that has resulted in crippling economic sanctions and heavy military losses for Russia, as well as mass civilian casualties and destruction in the very Ukrainian cities Putin claims he wants to “liberate.”

To all this, Putin has said, repeatedly, in public comments that the war is going “according to plan.”

As the conflict escalates, the question of what is driving Putin has become an increasingly perplexing one, with no obvious answers but with enormous consequences: The war will end, some experts say, when the Russian president allows it to end.

Gessen set out to understand the Russian leader’s mindset more than a decade ago, first in an article for Vanity Fair, then in “The Man Without a Face.” Tracing Putin’s rise from a petulant and unruly schoolboy to a KGB operative who ascended to the Russian presidency, Gessen examined the post-Soviet political, cultural and economic forces that enabled Putin’s rise and the way he vilified the West to solidify his grip on power.

After Russia’s 2014 annexation of Crimea, Gessen wrote a postscript summarizing Putin’s increasingly aggressive stance toward Western democracies and his evolution from “a bureaucrat who had accidentally been entrusted with a huge country into a megalomaniacal dictator who believed he was on a civilizational mission.”

In a recent phone interview, Gessen, a staff writer for The New Yorker, discussed several books that offer insights into Putin’s psychology, as well as titles that illuminate the cultural and geopolitical context that helped shape Putin’s Russia.

Below are Gessen’s recommendations, which have been lightly edited for clarity.

‘Winter Is Coming: Why Vladimir Putin and the Enemies of the Free World Must Be Stopped.’ By Garry Kasparov. PublicAffairs, 2015.

Kasparov, the Russian chess grandmaster, is a longtime critic of Putin.

“Kasparov thinks about life as chess. And he looks at this as a series of plays. He doesn’t look at Putin’s psychology so much as he looks at the logic of his actions and says, ‘OK, well, this is how we game it out.’ And it is not uplifting. I mean, the book is not recent, and he was quite sure then that Putin was at war with the West at that point.

“It’s funny, because one didn’t really have to press in to see that, one just had to pay attention and not be beholden to the conventional wisdom that says, ‘but that’s not possible; that’s crazy; he doesn’t really mean it.’ We’re going to look at this period between 2012 and 2022 as a period when there’s a lot of that happening, when the war was slowly ramping up in plain view and most of the world was in denial about it.”

A compilation of interviews with Putin published in the United States in 2000.

“I found it incredibly illuminating because, if you read it as a document of what this man wants to tell the world about himself, you learn a lot. It’s not a very long book, and it doesn’t have a lot of variety, but he recounts three different fights that he had. One was when he was a kid and he felt mistreated by a teacher, if I remember correctly. One was when he was a student and one was when he was a young officer. And in all three cases, he lashes out. He basically loses his temper, and then he goes quiet for a bit, and then he strikes again.

“This is what it communicates: that this is somebody who has no desire to control his temper. He thinks of himself as somebody who will lash out, somebody who’s vengeful. Somebody who likes to strike out of the blue, but also — and this is the thing that I’m most worried about now — he will go quiet for a bit, and then he will strike again. That’s actually an M.O. that is important to his self-conception.”

This book examines how civilization and politics have been shaped by resources like coal, oil and grain.

“I recommend anything by Alexander Etkind, who is a cultural historian of Russia. His latest book is called ‘Nature’s Evil,’ and it’s a cultural history of natural resources. It’s not entirely limited to Russia, but I think it actually goes a very long way to explaining how Russia works.”

‘The Anatomy of Post-Communist Regimes.’ By Balint Magyar and Balint Madlovics. CEU Press, 2020.

Magyar, a social scientist and former politician, looks at the ways in which postcommunist regimes have given rise to autocrats who have cracked down on media and political dissent.

“Anything by Balint Magyar. He is a Hungarian social scientist, and he has this tome, it’s this huge book called ‘The Anatomy of Post-Communist Regimes.’ It’s a little on the technical side, but it’s so incredibly illuminating. I think my favorite book of his is called ‘The Post-Communist Mafia State,’ which pretends to be about Hungary, but is the best book for understanding postcommunist Russia and how the regime works.” 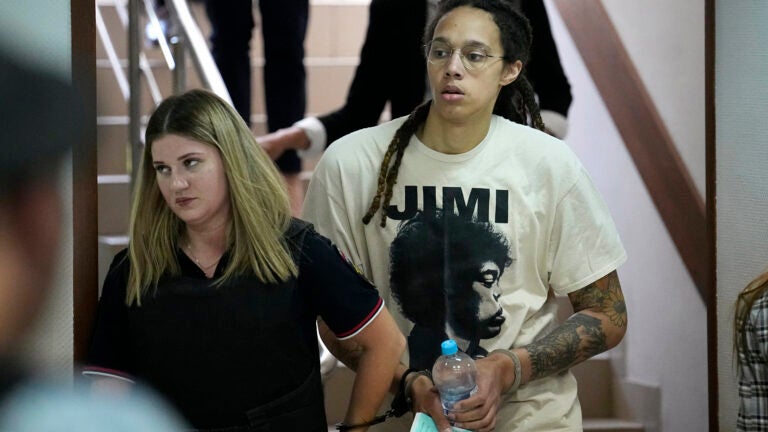 Griner sends letter to President Biden pleading for his help