BOSTON (AP) — One point was better than none. It still wasn’t enough for the Boston Bruins as they try to move into playoff position.

Noah Hanifin scored the only goal of a shootout in the fifth round to help the Carolina Hurricanes beat Boston 2-1 on Tuesday night and dent the Bruins’ playoff hopes. Boston earned one point to move into a three-way tie with Detroit and Philadelphia for the last two Eastern Conference playoff spots, but both of those teams have more games remaining.

“This time in the season, when you lose games, it’s always tough,” said Bruins goalie Tuukka Rask, who stopped 27 shots, plus the first four of the shootout. “They’re all do-or-die now.”

Cam Ward made 35 saves for the Hurricanes, who have already been eliminated from the playoff race. Loui Eriksson’s third-period tying goal helped the Bruins force overtime and earn one point.

The Flyers have four games remaining and Detroit has three, including Thursday night against Boston.

“We have two games left and we still need to look at the next one and be extremely prepared for that,” forward Brad Marchand said. “We have to let this one go and be ready.”

Bruins fans chanted “We want playoffs!” in the third period and again in the overtime, but they will have to wait at least a couple games, with Thursday night’s matchup against the Red Wings followed by the season finale on Saturday against the also-ran Senators.

Hurricanes coach Bill Peters said the game was important — even though his team is already out of the playoff chase.

Slavin scored for Carolina with just under 2 minutes left in the first period, and it was still 1-0 when Ericksson was sent off for tripping with half a minute left in the second. He came back early in the third just as a clearing pass was skittering in front of the Carolina bench, with the Hurricanes making a casual line change.

Eriksson crossed the ice, picked up the puck as the departing Hurricanes climbed over the boards and skated in alone on Ward before reaching around him to deposit the puck in the net.

The Hurricanes came closest to taking the lead in regulation when Brett Pesce’s shot got under Rask’s arm and trickled toward the net. But Bruins defenseman Zdeno Chara outreached Carolina’s Elias Lindholm for the puck and swept it safely away.

Midway through overtime, Jordan Staal was called for tripping, but Boston’s Colin Miller was sent off for embellishment, leaving the teams at equal strength. That brought it to the shootout, and the first nine skaters were stopped before Hanifin beat Rask.

NOTES: After the game, fans were invited to stay in their seats to film a scene for the Boston Marathon bombing movie “Stronger,” in which Jake Gyllenhaal plays bombing victim Jeff Bauman. … Carolina has earned at least one point in 13 of its last 16 games. … It was Slavin’s second career NHL goal. 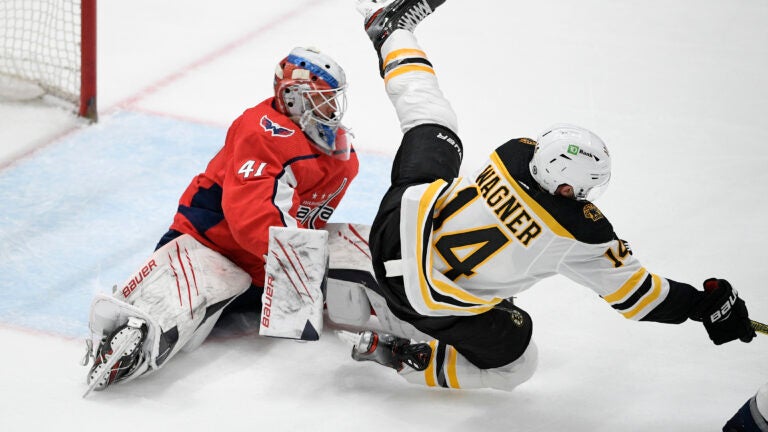