ATLANTA (AP) — Talk about a short memory. Kyle Korver came out shooting, and this time he couldn’t miss.

The Boston Celtics? They couldn’t make anything.

Shaking off a dismal performance in the playoff opener, Korver swished four 3-pointers in the opening minutes to propel Atlanta to a stunning 21-point lead before many fans had settled into their seats Tuesday night. There wasn’t much doubt after that, the Hawks cruising to an 89-72 victory and a 2-0 lead in the Eastern Conference series.

“We all have pride, right?” said Korver, who went 1 of 10 on Saturday and missed all seven of his 3-point attempts. “I wanted to come out and play better the second game.”

As good as Korver and the Hawks were in the early going, this one will be remembered more for the Celtics’ grisly start. They scored just seven points over the first 12 minutes, the lowest-scoring opening quarter in a playoff game since the NBA went to a shot clock in 1954.

“I don’t know what it is,” said Boston’s Jae Crowder, looking a bit shell-shocked after scoring just two points on 1-of-9 shooting, “but we’ve got to change something.”

Crowder had plenty of company in his shooting misery.

The first quarter was off-the-charts bad. Boston made just 3 of 23 shots and missed all six of its 3-point attempts. The Hawks made things especially tough on the undersized Celtics from close in, blocking six shots.

According to STATS, the previous record for fewest points in an opening playoff quarter during the shot-clock era was eight, set by Utah in 1988 against the Los Angeles Lakers and matched by Dallas in 2010 at San Antonio.

It was also Boston’s lowest-scoring playoff quarter — any quarter — since the NBA was founded in 1949.

“We’ve got to figure it out,” Thomas said. “They’re playing good team defense. But we, as a coaching staff and as players, we’ve got to figure out a way to make it as easy as possible. Not just for myself, but for everybody on this team.”

The Hawks made nine of their first 13 shots, knocking down six from outside the 3-point stripe. Korver was really on fire, the last of his early flurry giving the Hawks a 24-3 lead just 6 1-2 minutes into the game.

Even after failing to score the rest of the period, the Hawks still led 24-7.

That, for all intents and purposes, was it.

Now, it’s on to Boston for Game 3 on Friday night.

“There’s a lot of pride just in the Celtics, in the logo, in the uniform, in the history,” said Korver, who finished 5 of 7 on 3s and, along with Al Horford, led the Hawks with 17 points. “They’re going to come out and give us their best shot, and we know that we have to be ready for that.”

Boston struggling was not unexpected, given the Celtics were without two key players. Bradley, the team’s second-leading scorer, went down in Game 1 with a badly strained hamstring and is unlikely to play the rest of the series. Then, after the morning shootaround, the Celtics ruled out key backup Kelly Olynyk because of a lingering shoulder injury.

Even so, no one expected it to be this bad.

For good measure, the Hawks matched their franchise record for the fewest points allowed in any playoff quarter. They also surrendered seven in the fourth period of a 90-64 win over the Miami Heat in 2009.

After their opening salvo, the Hawks made just 23 of 69 shots (33 percent) the rest of the way.

Led by Horford, the Hawks set another franchise playoff record with 15 blocks.

“Pleased with the defense, the activity in the paint, around the basket, everywhere,” coach Mike Budenholzer said.

Celtics: Got as close as 10 points in the second quarter, but never got the deficit into single digits. … Have lost seven straight playoff games, their last victory coming against the New York Knicks on May 1, 2013. … Olynyk said he’s hopeful of playing in Game 3, since he’ll have a couple of off days to rest his ailing shoulder.

Hawks: Jeff Teague (13 points) and Sefolosha (12) were the only other double-figure scorers. … Recalled G/F Lamar Patterson from the D-League before the game to bolster depth. With the game decided, the rookie made his first career playoff appearance in the closing minutes, getting on the court with little-used veteran guard Kirk Hinrich. 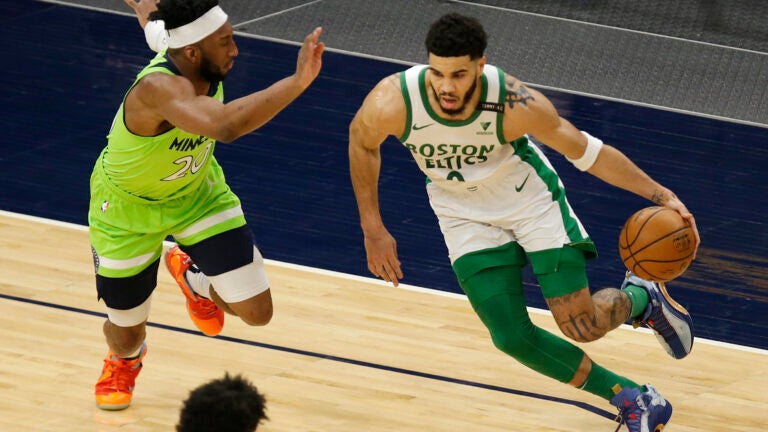