When Kellie Marshall, 24, asked her boyfriend, Harry Moulton, 23, if he wanted to run this year’s Boston Marathon with her, he said yes immediately. He had already bought the engagement ring with which he would propose to her at the finish line two months before that moment, she said.

This was Moulton’s first marathon, but Marshall has been running Boston since 2014, the year after two bombs exploded on Boylston Street and knocked her off of the fence out front of the Atlantic Fish Company. She had been watching the race with her cousins one moment and was in the emergency room the next.

The bombing left Marshall with small pieces of shrapnel in her leg, a concussion, and some hearing loss in her right ear, but she was “very lucky,” she said.

Marshall has been in contact with The One Fund since. They offered members two bibs to run Boston this year, which is how Moulton joined her on the course for the 2016 race. Now, Marshall has her engagement to override her 2013 memories.

“I think that’s most of the reason why I wanted to run in the first place, to replace the bad memories with something good and to have an accomplishment for that day instead of just something horrible that happened,” she said. “So to add something else amazing to replace those memories is just the perfect way for [the proposal] to have happened.”

It was the ideal way to get engaged in many ways, she said.

“I’ve always said that I wanted my whole family there but still wanted it to be a surprise, but I didn’t know how that would be possible,” Marshall said. “It was perfect.”

To add something else amazing to replace those memories is just the perfect way for [the proposal] to have happened.

Marshall and Moulton grew up together in Danvers, and their families have long been friends. On Marathon Monday, both of their families were waiting right at the barricades after the finish line. The families knew what was about to happen when Moulton went down on one knee, but Marshall didn’t.

“When he went down, I thought he just had to throw up because he was saying for the last three miles of the race that he felt nauseous,” Marshall said. “Then he pulled the ring out and put it on my finger—and then he threw up.” 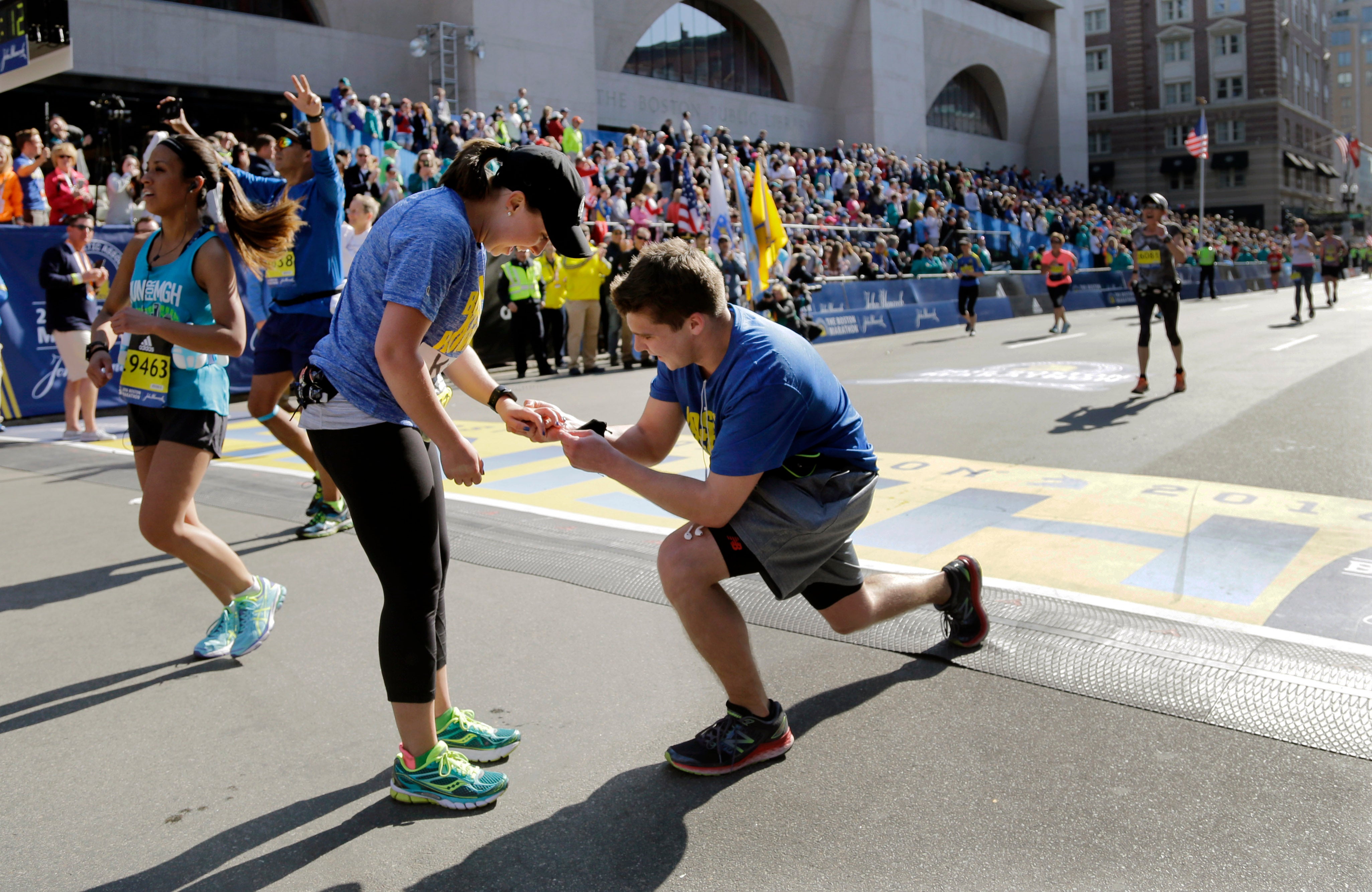 Moulton slips an engagement ring onto the finger of Marshall, both of Danvers, Mass., at the finish line after they completed the 120th Boston Marathon.

This didn’t make the proposal any less wonderful to her, though. They’re both able to laugh about it, and she said the ring is gorgeous.

“He likes to say that he didn’t give me a chance to say no, he just put [the ring] on my finger and threw up,” she said.

He pulled the ring out and put it on my finger—and then he threw up.

The marathon will always be important to the couple, and they plan on sticking around the area for a long time, too, Marshall said. They just recently bought a house together in Danvers.

“Harry might be ‘one and done,’ but I think I’ll run more [marathons],” Marshall said. “This one will definitely be hard to top, though.”