When it comes to scary B-movies, few flicks have stood the test of time like 1982’s “Evil Dead.’’

Way before Jigsaw was cutting people up in “Saw,’’ “Evil Dead’’ pushed the boundaries of horror with its over-the-top portrayal of blood-and-guts violence and demonic possessions.

The flick has gained a massive cult following over the years, thanks mostly to the love fans have for series star Bruce Campbell. “Evil Dead’’ launched the career of this charismatic actor, and he’s been an icon on the B-movie scene ever since.

On Saturday, Campbell will be at the Wilbur Theatre for a screening of the original “Evil Dead’’ followed by a Q&A session.

Campbell recently spoke with Boston.com about the legacy of “Evil Dead,’’ his upcoming projects, and his fondness for Boston.

Boston.com: When you were making “Evil Dead’’ over three decades ago, did you ever get the sense that it would become such a cult classic among horror fans?

Bruce Campbell: We didn’t think we were going to finish the film, so there were no preconceived notions about our pending success. This was a very rocky road, getting that movie to a theater. It basically took four years to make, and we shot the film 35 years ago. We shot it in 1979, it didn’t come out in some places until ’82 or ’83. So yeah, we were not thinking of greatness, or that it’d eventually stand the test of time.

Boston.com: Why do you think the film has remained popular after so many years?

Campbell: Well Sam [Raimi] is a brilliant director and we did a lot of fun stuff together. Those movies are just different—they’re not like the average horror movie. There’s really visual, crazy s–t in the original “Evil Dead’’; it took us all day to get one shot. Most low-budget horror movies don’t do any of that; they try and shoot these things in three weeks. And also, Ash as the protagonist. There are very few horror series where there’s someone you’re rooting for. Usually you’re fearing for these people; they’re just victims. Ash is not a victim, even though he is.

It’s nice to have done something that does hold up, because not everything you do holds up or gets remembered.

Boston.com: The original “Evil Dead’’ is a pretty gruesome horror flick, but many of the over-the-top scenes come across as being humorous. Does the film function, in some ways, more as a comedy than a scary movie?

Campbell: You’re completely wrong about that. It’s not a comedy at all. It was never intended to be a comedy. What you have is very extreme situations that will make people laugh. Somebody gets stabbed in the Achilles with a pencil and blood comes gushing out—some people are going to laugh. The dialogue is all straight, it’s delivered straight, which is why the remake was done serious as well. The original “Evil Dead’’ has very hokey dialogue delivered by very inexperienced actors. You’re going to get some comedy out of that potentially, but there are also some good horrific moments.

The pundits have made it into a comedy, and they’re so wrong. When some of the reviews for the “Evil Dead’’ remake in 2013 were like, “This movie has no comedy like the original,’’ it’s like, what are you talking about? A woman got raped by a f—–g tree in the original. To me, that’s not funny.

Boston.com: Speaking of the remake, have you put any thought into how the 2013 version compares to the original?

Campbell: I don’t compare it to the others because there are three standalone movies with the character Ash. This one didn’t even have the character. I’m glad it did not have any of the original characters. This was a new twist on it. This was like saying to another director, “How would you do ‘Evil Dead?’’’ That’s how Fede [Alvarez] did it, and for his first movie, it was a very sophisticated movie. The guy did a really, really good job, I felt, as the producer. And what the hell, it made $96 million.

Boston.com: Will we ever see the return of Ash to either the big or small screen?

Campbell: We’re trying to get Ash as a TV show right now. We’re currently negotiating with a company to get this thing on the air. It’s basically the return of Ash in the modern day, reenlisting to kick some demon ass. So, you know, until the deal is signed, there’s not a whole lot you can talk about. But yeah, we’re actively trying to get that going. 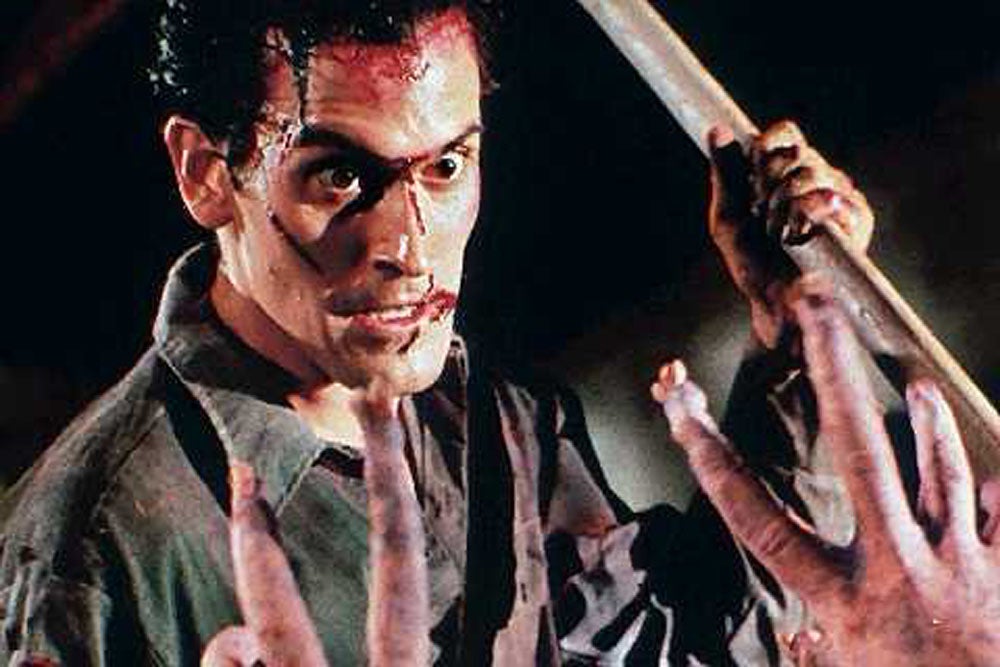 Bruce Campbell in a scene from “Evil Dead 2: Dead by Dawn.’’

Boston.com: What are you looking forward to most coming to Boston this weekend?

Campbell: I’ve been to the city many times. It’s a great, great old city. I’m from Detroit, and not to compare Boston to Detroit, but they’re both working-class towns that have a lot of history. Boston has a tremendous amount of history; so does Detroit. They both have really cool old parts and interesting architecture. I always hook up with Boston, glad I don’t have to drive there.

Boston.com: Do you have any go-to spots you try to visit when you’re in town?

Campbell: Well, the sad thing about what I do is like, “The good news is you’re going to Boston, the bad news is [you’re] out of there the following day.’’ I have to work in New Mexico—I have a new movie starting Monday, so I can’t lollygag.

Boston.com: Can you reveal any details about the upcoming project?

Boston.com: How’d you get involved with this role?

Campbell: You know, things just show up, and every once in a while something really good shows up. This one I’m really excited about—it’s probably the best script I’ve read.

Boston.com: In Boston, you’ll be watching “Evil Dead’’ alongside the audience. Is it weird actually seeing people react to your work as it unfolds on the screen?

Campbell: Oh, I’ve seen it so many times I can point to when they’re going to make noise. I can point to where they’ll stop. The movie is like a metronome. Usually, the fun is for people who’ve never seen it. I try and take polls of who hasn’t seen it, and usually there’s only like 20 hands up out of 300 people. Usually it’s a pretty familiar crowd, which is OK, because they’ll have their same reactions. It’s not “Rocky Horror Picture Show,’’ but people usually have a pretty good time.

Boston.com: In addition to the screening, what else can fans expect from Saturday’s event at the Wilbur Theatre?

Campbell: It’s a full-on Q&A—it’s kind of me versus the audience. You can ask anything you want. I don’t really care. Sometimes I give out money if it’s a good question, insult them if it’s a bad question. You know, a lot could happen. Fast and loose.