Jennifer Lawrence and her fiance, art gallery worker Cooke Maroney, are reportedly set to get married this Saturday in Rhode Island.

The “Hunger Games’’ actress is getting married at a “swanky venue’’ in Rhode Island this weekend in front of 150 guests after being engaged for eight months, according to a report published Thursday on TMZ.com.

Although the exact venue has not been publicly disclosed, TMZ reports that celebrity party planner Mark Seed has been hired to put the soiree together, and TMZ said the menu includes hors d’oeuvres like sweet potato flat cakes, brussels sprouts with cured egg yolk, smoked pork belly with pickled apple, and salt cod beignets.

The main courses are expected to be a choice between wood-roasted fish with herbs and lemon-infused butter and a five-week-aged leg of beef with forager’s sauce, according to TMZ, and desserts include bread pudding with chocolate, salted caramel, and fresh apples; cauldron fritters with bourbon cream and cinnamon sugar; and housemade marshmallow s’mores.

At least one local website, thenewportbuzz.com, reports that Lawrence and Maroney are set to get married in Newport. (The website appeared to buckle briefly under the weight of online traffic Thursday morning.)

Representatives for Lawrence could not immediately be reached.

Lawrence, who has homes in New York and California, is already fairly acquainted with New England: She filmed “Joy’’ around Boston in 2015, and she has spent Thanksgiving on Martha’s Vineyard with celeb pal Amy Schumer (who has since married a Vineyard chef).

Lawrence — who has previously dated Darren Aronofsky, Nicholas Hoult, and Chris Martin — said on a podcast in June that Maroney is “the greatest human being I’ve ever met — he really is.’’

“He’s just — the one. I know that sounds really stupid, but he’s the greatest person I’ve ever met. I feel very honored to become a Maroney,’’ Lawrence said on “Naked with Catt Sadler.’’

Lawrence acknowledged that she planned to change her name legally but wasn’t going to touch her stage name: “I’m not going to ask everyone to do a 180 11 years in,’’ she said.

She also said that when she met Maroney, she wasn’t necessarily ready to get married.

“I just met Cooke and I wanted to marry him,’’ she said during the podcast interview. “We wanted to marry each other, we wanted to commit fully. He’s my best friend. I want to legally bind him to me forever, and fortunately, the paperwork exists for such a thing. It’s the greatest. You find your favorite person on the planet and you’re like, ‘You can’t leave.’ ’’

When asked about the planning process, Lawrence said she wasn’t nervous about her wedding day and noted that she has been “in a good place.’’

Lawrence didn’t disclose anything else about the venue but did note that she had cried earlier because she didn’t realize she wanted a bachelorette party — and when she decided she did and then went to plan one, no one was available, leading her to break down in tears.

She also partnered with Amazon to publish her wedding registry wants last month, and was quoted on the page as saying, “I thought it would be fun to collaborate with Amazon to share a few of my favorite registry wish-list items.’’

The registry ranged from expensive items — like a $449 iRobot mop and a $249 weighted blanket — to fairly stereotypical wedding wares, such as a Le Creuset dutch oven, a Black and Decker food processor, Riedel martini and wine glasses, and marble cheese and serving boards. (The “registry’’ was more of a marketing tool for Amazon; customers couldn’t actually buy the items and send them to Lawrence like a normal registry.)

Meanwhile, Lawrence and Maroney were apparently spotted at New York City Hall’s marriage bureau last month with a photographer, a friend, and security guards, according to Page Six. The photographer was reportedly Mark Seliger, known for his pictures of celebrities (he recently took one of Gisele Bündchen); Seliger had previously posted a photo of Lawrence to his Instagram.

A representative for Seliger reached by phone Thursday declined to comment. 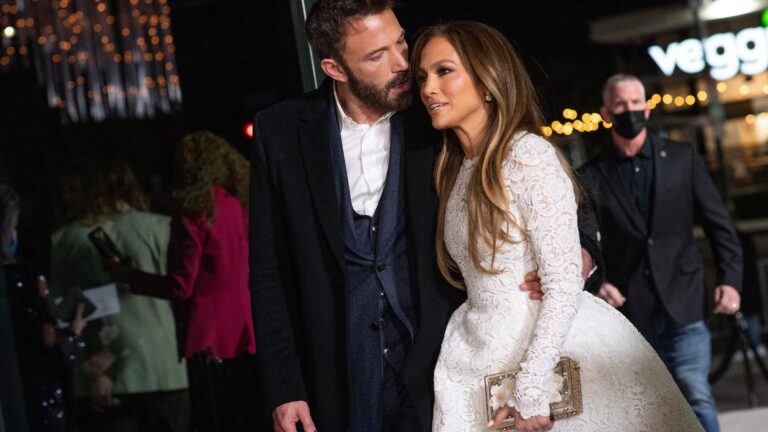