Hilaria Baldwin is a yoga instructor, podcaster, author, Instagram star, and the wife of actor Alec Baldwin, with whom she has five children.

But years before she became Hilaria Baldwin, the 36-year-old was known as Hillary Hayward-Thomas to her classmates at The Cambridge School of Weston.

Baldwin has been defending herself online after a viral Twitter thread by @LeniBriscoe accused her of lying about her Spanish heritage and adopting a fake Spanish accent, citing numerous interviews, video clips, and podcasts of Baldwin from over the years.

“You have to admire Hilaria Baldwin’s commitment to her decade long grift where she impersonates a Spanish person,” the user wrote.

Following the accusations, numerous CSW alums who knew Baldwin in high school responded online, saying, among other things, that she went by Hillary and had “ZERO Spanish accent” while at CSW.

Both Hilaria and Alec posted videos on Instagram hitting back at her critics, with Alec calling Twitter a “vast orchard of crap,” and Hilaria defending her culture and her choice to raise her children in a bilingual household.

Here’s everything you need to know about the controversy.

Was Hilaria Baldwin born in Boston or Spain?

Creative Artists Agency, Hilaria Baldwin’s representatives, say that she was born in Mallorca, Spain and raised in Boston in Baldwin’s official CAA speaker biography. (The information was removed on Monday afternoon.)

Baldwin has also given numerous interviews in which the publications say she was born in Spain, including a 2018 cover story for Hola! USA.

“Hilaria, who was born in Spain, has made certain to raise her children with her native language, Spanish,” the article reads. “‘I speak to them in Spanish. Alec does not speak Spanish so he speaks to them in English. He’ll try like a little bit and then next year Carmen is going to go to a bilingual school,’ [Baldwin] shared.”

Baldwin also showed appreciation to Latina Magazine when it named Baldwin one of its “Best-Dressed Latina Stars” in 2013.

😘“@Latina: @hilariabaldwin,u looked stunning in that red dress this week! Picked u as one of our best dressed stars: http://t.co/MuzJoPRuMh”

In an April 2020 podcast interview with Mom Truths, Baldwin chose her words carefully when asked about her past.

“From?” the hosts interjects.

“From — my family lives in Spain,” Baldwin responded.

Hilaria Baldwin went on the #momtruths podcast in April 2020 and said she didn’t move to the US until she was 19 to go to NYU pic.twitter.com/s1BojT4XAH

“I was born in Boston and grew up spending time with my family between Massachusetts and Spain,” Baldwin said. “My parents and sibling live in Spain and I chose to live here, in the USA. We celebrate both cultures in our home — Alec and I are raising our children bilingual, just as I was raised.”

Although Hilaria Baldwin’s parents now reside in Spain, it appears that neither of them are originally from the country.

As her father, David L. Thomas Jr., put it in a 2015 blog post for International Integrators: “My path in life has been heavily influenced by Spanish language and culture, and not because I have an iota of latin blood in my veins.”

What about Hilaria Baldwin’s accent?

Baldwin has made numerous media appearances, including segments on “Good Morning America” and “Today,” in which her accent is inconsistent.

In one example noted by Twitter user @lenibriscoe, Baldwin appears to forget the English word for cucumber.

Here she is pretending not to know how to say cucumber in English 😭 pic.twitter.com/g8xYNktsNY

In Baldwin’s Instagram video addressing the controversy, she speaks without a Spanish accent.

What do Cambridge School of Weston classmates and staff have to say?

A Cambridge School of Weston yearbook photo of Hilaria Baldwin, then known as Hillary Hayward-Thomas.

Many people in the replies to @LeniBriscoe’s viral thread claimed to be classmates of Baldwin’s from her days at Cambridge School of Weston, where Hillary Hayward-Thomas graduated from in 2002.

“I went to high school with her,” one 2002 CSW grad tweeted. “Genuinely lovely person, I recall, but fully a white girl from Cambridge.”

“Hillary was kind and hard working,” another ’02 grad tweeted. “And, yes, a white girl from Boston.”

One former CSW teacher who did not want their name used for publication, said that Baldwin had no trace of a Spanish accent at CSW.

“Her CSW name was Hillary,” the teacher said. “She had ZERO Spanish accent. She was a good kid, kinda quiet (at least from a teacher’s perspective). And she was a gifted dancer — phenomenal.” 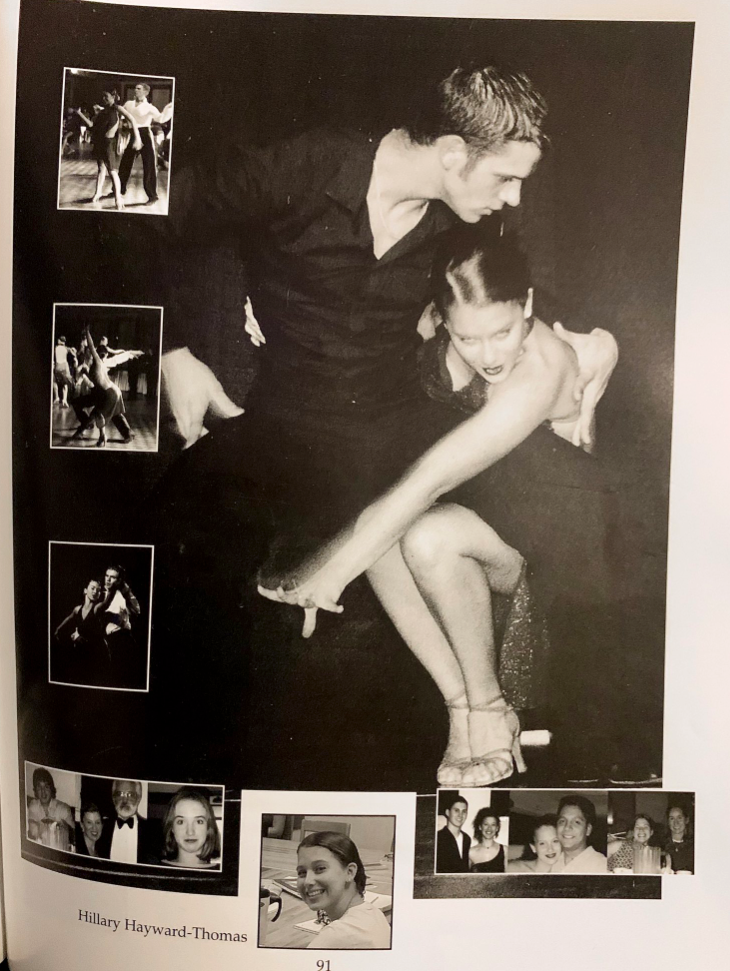 Hillary Hayward-Thomas’s yearbook page from her senior year at The Cambridge School of Weston.

How did Hilaria and Alec respond?

Both Hilaria and Alec have posted multiple responses on Twitter and Instagram (some of which were later deleted) giving context to Hilaria’s cultural background and cast aspersions on internet haters.

In her initial Instagram video, Baldwin said that because she was raised speaking both English and Spanish, her accent sometimes fluctuates.

“There was a lot of back-and-forth my entire life, and I’m really lucky that I grew up speaking two languages,” Baldwin said. “When I tried to work, I try to enunciate a little bit more, but when I get nervous or upset, then I start to mix the two.”

Baldwin also said that her whole family and some friends call her Hilaria, while others have used Hillary. Baldwin said that she eventually decided to “consolidate” to just Hilaria, citing the confusion having multiple different names on various forms can cause, such as picking up a prescription at a pharmacy.

“It’s the same name, just a few letters different, so I think we shouldn’t be so upset about it,” she said. “And whatever you guys want to call me, I will respond to both.”

In the past few days, numerous online critics have called Hilaria “a white girl from Boston,” a label she appeared to embrace Sunday.

“Yes I am a white girl,” she said. “Europe has a lot of white people in there. My family is white. Ethnically I am a mix of many, many, many things; culturally, I grew up with the two cultures. So it’s really as simple as that.”

Baldwin said she was “proud” to be raised in a bilingual household, and to be raising her children in one as well.

In a second video Sunday, Baldwin questioned “why this is turning into such a big thing.”

“I’ve never said that my mother was Spanish, my family is a big mix of so many different things,” Baldwin said. “My thing is about being authentic and when people say I’m not being authentic, it hurts my feelings … I don’t really understand why this is turning into such a big thing. I want to take it seriously, but I also don’t want it to be all of a sudden I’m apologizing for who I am. Because at this point, I’m starting to feel that I’m being attacked for who I am, and that no answer is the right answer.”

Alec Baldwin, meanwhile, posted a lengthy video criticizing social media in general, slamming the founders of Facebook and alluding to conspiracy theories like Pizzagate. Baldwin eventually advised his 1.9 million Instagram followers to “consider the source” of the gossip about his wife.

Hilaria’s stepdaughter, Ireland Baldwin Basinger (from Alec’s previous marriage to Kim Basinger), defended Hilaria as well in her Instagram Story, calling her “a wonderful mother who takes great care of her kids” and “great care of my dad.”

“It’s so pathetic that anyone would want to play detective and dig that deep into someone’s life that they don’t know anything about, don’t know how they were raised, don’t know who they were raised by,” Ireland said. “And the last thing we really need to do is start s*** and gossip about something just so, so stupid.”

A representative for Baldwin did not respond to a Boston.com request for comment.

Why is this important?

Critics say that Baldwin’s alleged adoption of a culture that isn’t hers has crowded out space for Hispanics and Latinas, citing Baldwin’s magazine appearances as an example.

Aura Bogado, an investigative reporter for Reveal, criticized Latina Magazine for elevating Baldwin in its pages.

“For nearly a decade, @Latina touted @hilariabaldwin, a white woman with white parents from Massachusetts,” Bogado wrote. “During this time, the magazine has been accused of erasing black latinas, and publishing pieces about how white latinas are somehow discriminated for not being dark enough.

“The fact that @hilariabaldwin pretended to be from Spain with that ridiculous accent, while some of us have been denied opportunities for our actual accents, is disgusting. The fact that she pretended to be an immigrant, at a time of hatred, detention, and deportation, is sick.”

The fact that @hilariabaldwin pretended to be from Spain with that ridiculous accent, while some of us have been denied opportunities for our actual accents, is disgusting. The fact that she pretended to be an immigrant, at a time of hatred, detention, and deportation, is sick. 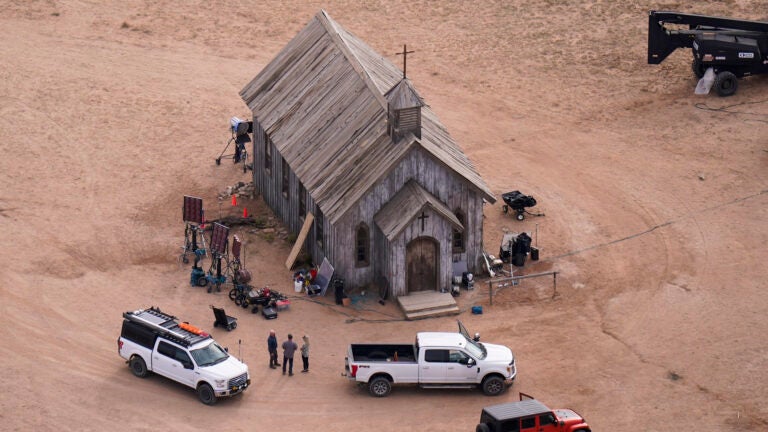