John Cena, the professional wrestler and a star of “F9,” the latest installment in the “Fast and Furious” franchise, apologized to fans in China on Tuesday after he referred to Taiwan as a country while giving a promotional interview.

Joining a long list of celebrities and companies that have profusely apologized after taking an errant step through China’s political minefields, Cena posted a video apology in Mandarin on Weibo, a Chinese social network.

Beijing considers Taiwan, a self-ruled democratic island, to be a breakaway province and claims it as part of China. Referring to it as a country is often an offensive assertion in China, where matters of sovereignty and territory are passionate issues driven by a strong sense of nationalism.

Cena apologized for a statement he made in an interview with the Taiwanese broadcaster TVBS. In it, he told the reporter in Mandarin, “Taiwan is the first country that can watch” the film.

“I made a mistake,” Cena said in his apology video. “Now I have to say one thing which is very, very, very important: I love and respect China and Chinese people.”

He continued: “I’m very sorry for my mistakes. Sorry. Sorry. I’m really sorry. You have to understand that I love and respect China and Chinese people.”

Cena has studied Mandarin for years and regularly posts on Weibo, but many of his Chinese fans were not quick to forgive.

“Please say ‘Taiwan is part of China’ in Chinese. Otherwise, we will not accept your apology,” one Weibo user responded in a comment that was liked thousands of times.

Western companies and celebrities that do business in China — and it can be very big business, especially for the entertainment industry — are often forced to walk a political tightrope to not offend Chinese sensibilities. For many, this is achieved by staying as far away from politics as possible, steering clear of questions about mass detentions in Xinjiang, pro-democracy protests in Hong Kong or the status of Taiwan and Tibet.

The consequences for those who dabble in Chinese politics have been made clear. The NBA struggled to contain a fierce backlash when Daryl Morey, then the general manager of the Houston Rockets, tweeted in support of the Hong Kong protests in 2019. (LeBron James, one of basketball’s biggest stars, offered a China-friendly response, saying Morey “wasn’t educated on the situation at hand” by supporting the protesters.)

But quite often, the political problems arise in cases where a company appeared to have no idea it was accidentally crossing a line.

That list would include Gap, which in 2018 created a T-shirt that omitted Taiwan, parts of Tibet and islands in the South China Sea from a map of China on the shirt’s design. The luxury brands Versace, Givenchy and Coach said in 2019 they all made mistakes when they produced T-shirts that identified Hong Kong and Macao as countries.

“Versace reiterates that we love China deeply, and resolutely respect China’s territory and national sovereignty,” the company said in a statement at the time.

China ordered 36 airlines to remove references to Taiwan, Macao and Hong Kong as separate countries on their websites in 2018, a step the Trump administration dismissed as “Orwellian nonsense.”

That year, Marriott clarified on its Weibo account that it “will absolutely not support any separatist organization that will undermine China’s sovereignty and territorial integrity” after a customer survey listed the territories as separate countries.

Daimler, the German carmaker, apologized in 2018 after the Mercedes-Benz Instagram account quoted the Dalai Lama, whom many in China view as a dangerous separatist advocating Tibetan independence.

The release of “F9” was delayed for a year during the coronavirus pandemic. It drew an estimated $162 million in tickets in eight international markets, including China and South Korea, over the weekend. As the newest film in a hugely successful series, “F9” is seen by Hollywood as the kind of blockbuster needed to draw people back to theaters. 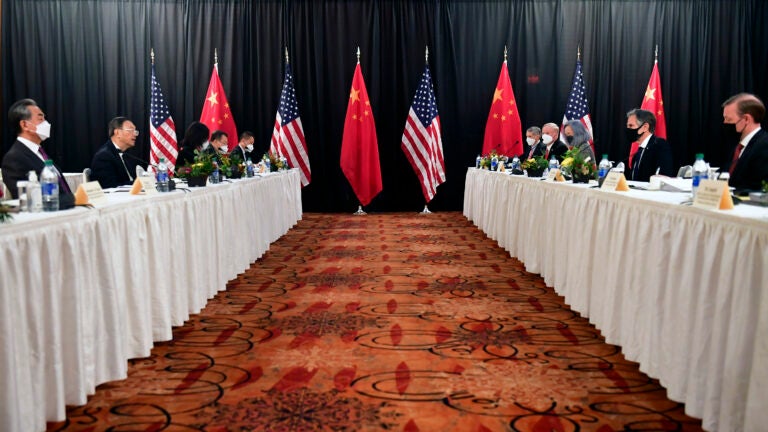 After testy meeting, China says will discuss climate with US