Certain cities seem like they’re crying out to be sung about: Just think of Frank Sinatra’s “My Kind of Town (Chicago),” Billy Joel’s “New York State of Mind” … Heck, even “Beverly Hills” by Weezer. But does Boston fit into that category?

We asked Boston.com readers for their take on the most memorable Greater Boston references in popular music, and they had more than a few suggestions from throughout the decades. But it’s up to you to choose which one is tops. Check out the songs posted below — along with our historical commentary — and then respond to our poll (here or at the bottom of this article).

We limited entries to one per artist or band (or else these would have to be mostly Dropkick Murphys songs), and we know there are plenty of lesser-known songs about the Hub that probably got left out — feel free to list those under “Other.” Meanwhile, show off your Boston-area music bonafides by voting and we’ll crown a winner next week.

Even if Cole Porter would really have us believe that “it” in this case is referring to “fall in love” (whatever you say, Mr. Porter), we think it’s safe to say that beans don’t do it.

“He may ride forever ‘neath the streets of Boston, he’s the man who never returned…”

With the MBTA’s Charlie Card named after the hapless hero of this song — stuck forever on the train as his wife hands him his daily sandwich at the Scollay Square station — it’s hard to deny the extent of its influence. Also, it’s darn catchy!

There are few songs as much about Boston as this one, from its shout-out “to the banks of the river Charles” to its reference to BU co-eds frustrated by their early curfew. Factor in its appearance at the end of every Red Sox home game and it definitely seems like the one to beat.

The Bee Gees supposedly had never been to Massachusetts when they recorded this song, and it shows.

“Now the first of December was covered with snow, yes, and so was the turnpike from Stockbridge to Boston …”

There’s no denying that James Taylor is a local favorite, although he’s arguably more Stockbridge than Boston. Still, the man certainly has a way with an evocative lyric.

“Please come to Boston for the springtime, I’m stayin’ here with some friends and they’ve got lots of room …”

Loggins — second cousin to Kenny, FYI — doesn’t really seem to have a preference among Boston, Denver, or L.A. in this easy listening favorite, as long as he doesn’t have to go home. For Boston bonafides you’re probably better off with the version by Joan Baez, who kicked off her career in Cambridge.

A Boston.com staffer who shall remain nameless once referred to this Jonathan Richman classic, in print, as being about “a bunch of losers hanging around the Stop & Shop parking lot.” He still gets death threats.

“Well, we were just another band out of Boston, on the road and tryin’ to make ends meet …”

The song also famously references Hyannis (granted, not the hippest of locations, unless you really love the Kennedys), so it’s kind of like a Greater Boston two-fer. Plus extra points for the band’s name.

‘They Came to Boston’ by The Mighty Mighty Bosstones (1991)

“Rented a car to see the sights but they found the Hub confusing, looked for the Swan Boats In Mattapan, well, I find that real amusing …”

It came a few years into their esteemed career, but on this track the Bosstones finally crystallized a classic Boston truism into its purest form: Most of the people who come here are wicked annoying.

“She’s the one who would have taken me to my first all-ages show, it was the Violent Femmes and the Del Fuegos, before they had a record out, before they went gold…’

This song was suggested by several readers despite it not specifically mentioning Boston; however, fans of Hatfield (and/or the Violent Femmes and the Del Fuegos) know that the show she’s referencing actually happened, at Storyville in Kenmore Square in 1983. (Also suggested by one reader: “Move With Me Sister” by the Del Fuegos, with the line “We take that trip into Kenmore from the Fenway side …”)

Good luck — everyone knows this is the place where everybody knows your name.

Granted, the Red Sox standard “Tessie,” or better yet this year’s “Queen of Suffolk County,” with its mentions of Skippy White’s and the Red Line, might be better choices when it comes to Beantown references by the Dropkick Murphys. But this is no doubt their best known song (thanks at least in part to Martin Scorsese’s “The Departed”), and while it contains almost no lyrics beyond those mentioned above, they’re certainly delivered with gusto.

Note: This post has been updated to correct the release date for “They Came to Boston.” 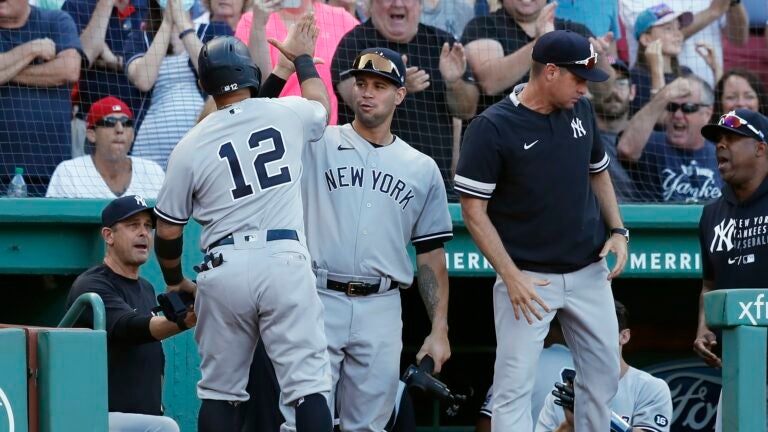