A green-built, pre-fab home by Blu takes shape in one day, in Portsmouth, Rhode Island.

On a warm September morning in Rhode Island, a dozen people gathered along a dirt ridge above an excavated building site, the sparkling water of Narragansett Bay just a few hundred feet away. People talked, laughed, hugged, cried, as a TMS 9000E (i.e. massive) crane and several agile workmen together unfolded a house. It was the 21st-century version of a barn raising. But instead of a barn, the structure that emerged was a 3-bedroom, 2-bath, 1-study, 2,400-square-foot prefab house built almost entirely with sustainable materials. Located on the grounds of Portsmouth Abbey, a boarding school in Portsmouth, Rhode Island, the structure will be home to a faculty member and family.

Where did this green, pre-fab, modern-design house come from? Blu, a Massachusetts- and California-based company whose co-founder, Bill Haney, happens to be a Portsmouth Abbey graduate.
The home, Blu’s “Evolution” model, includes recycled structural steel frame, Energy-Star windows and doors, a radiant heat system, low VOC finishes, and Forest Stewardship Council reclaimed wood floors. Company literature lists the starting price for this model at $295,000 (includes everything but the land, site work, and foundation).
The house-raising happened in one day, in part because of a Blu innovation: The house includes hinged sections, meaning the entire first floor was folded at the factory into a size that fit on one flatbed truck. Once on site, the crane lifted the folded house onto its foundation, and then the Blu team unhinged the assembly—and the rest of the first floor unfolded. A second-story section was lifted into place next.
As for the day’s house-raising moments: as the crane lowered the house so that it touched its foundation for the first time, the faculty member who will be living in the house gave Blu co-founder Bill Haney a big hug. Up on the folded house, meanwhile, it was all business: “Hey I need an Allen wrench,” one of the Blu team yelled.
Blu has built and installed more than 20 houses around the country, including several in New England (RI, ME, NH). The company’s name was inspired by the color of the sea and sky, and is also a reference to the color of a computer screen, as computer software makes the folded-house engineering possible. 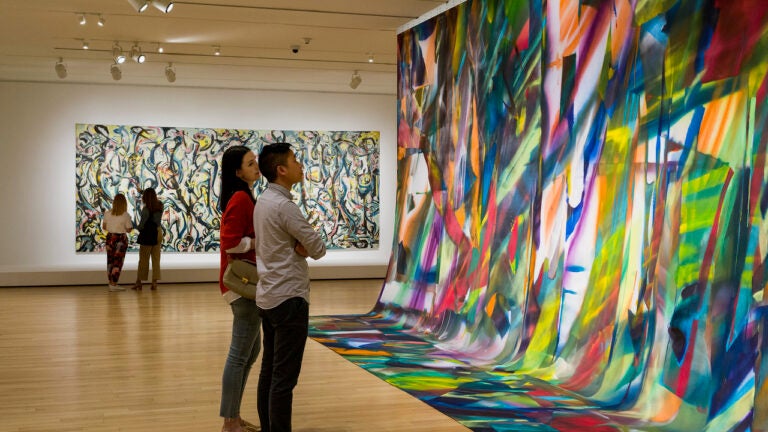 You can get free admission to 100+ New England museums on Sept. 21