The theme for this year’s gala event, a benefit for IIDA and Dress for Success Boston, was Iconography. It was broadly and mischievously interpreted as witnessed by the Best of Show: Bergmeyer of Boston, whose entry “Magic Kingdom Come” delivered a Mickey and Minnie Mouse the judges are still trying to get their heads around. (Joel Benjamin Photography was on-site with us and snapped all the stunning photos we’re sharing.)
When the 6-foot-4 Sorcerer’s Apprentice (above) dropped a magical cape to reveal a feminine side, we took to re-reading “Men Are From Mars, Women Are From Venus” and thought about heading for Pluto.

The feeling was reinforced when Minnie (above) appeared with Mickey’s hot pants beneath her cape. This team earned points just for keeping erect while balancing those headdresses. Mickey’s three-fingered cartoon hand extends its reach (below).

Everyone is mad (like the Mad Hatter, above) according to “Through the Looking Glass” from SMMA of Cambridge and Providence. “Idolize the extraordinary misfits of today,” the team warns, “for tomorrow they will be just another ordinary.” “Dweller Among the Clouds” was the lofty theme for Margulies Perruzzi Architects entry, a spikey interpretation of the mythical Chinese dragon (below).

Connect the dots for one red hot outfit (above) from SMRT of Portland, Maine, who used an array of graphic patterns in their inspired collection. The easiest way to change an interior is with paint. But the team from Sasaki Associates was looking for drama not ease when they partnered with Benjamin Moore and draped this beauty (below) with a dropcloth then stole the show by spray painting the dress on the runway. For the trim? Paint can covers (headdress) and handles (necklace).

Mt. Ida College took a stop-and-go road trip (above) down legendary Route 66 when design students created wearable traffic icons. “Icon of the Virgin” was clever, cheeky, and beautifully realized by Signer Harris of Boston who created an historically poignant Virgin Mother, Virgin Queen (below), and “Like a Virgin” Madonna.

And don’t forget to check out our top pick from the evening, featured in our new (Nov/Dec) issue! Take Note: Floored 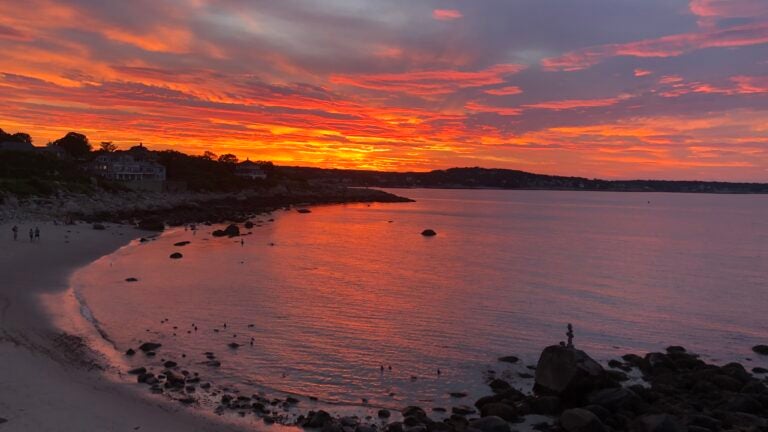 The 22 most beautiful reader sunset photos north of Boston