John S. Coles in his dining room, where the walls and ceiling were painted with his artistic hand.

With keen eye and deft hand, artist John S. Coles took a back stairway from dowdy to delightful for the 2012 Junior League of Boston’s Show House last fall. That fanciful notion reminded us of Coles’s many talents and prompted us to profile the Arlington, Massachusetts, artist in our January/February issue of Design New England, now on newsstands or in your mailboxes.

Coles, who both conceived and executed the staircase mural, was inspired by the house itself, a venerable 1860s Mansard, owned by the Sisters of St. Joseph and located on the grounds of their Jackson-Walnut Park Schools in Newton, Massachusetts. He was also influenced by the coincidental career of Auguste Edouart, a 19th-century French silhouette artist to the French royal family. Famed on both sides of the Atlantic (his American work is in Boston’s Museum of Fine Arts and the Smithsonian in Washington, D.C.) Edouart gained notoriety as the first to portray full-length silhouette figures, in addition to the better known head-and-shoulders profile portraits.

In the back stairway of 2012 Junior League of Boston’s Show House last fall, Coles created a staircase mural with a painted pattern background, life-size silhouettes, and portraits in faux frames.

“His landmark work definitely inspired me,” says Coles, who first painted the background walls in a soft grey-and-ivory stenciled pattern of diamond floral grids. Starting with a miniature sketch, Coles designed the stencils, cutting the repeat pattern out of 2-foot by 2-foot plastic sections, which he maneuvered as he climbed his ladder to paint the walls. He then cut life-size figures of a hypothetic son, daughter, and dog out of black paper and moved the forms around the wall until he got just the right sense of flow as the figures seem to ascend the stairs. Portraits of the “parents,” set in faux frames painted by Coles, are on the facing walls.
The artist used latex paint for the stenciled walls, acrylic paint for the figures, and chalk for the highlights. He completed the work – from design to finish – in just three days, to the delight of every Show House visitor who viewed it. 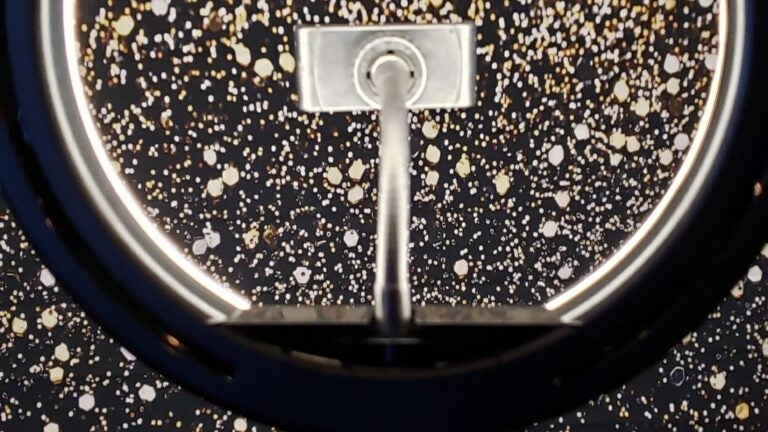