In a Vermont guesthouse designed by Mitra Samimi-Urich, the bathroom has a soothing palette evocative of the natural surroundings outside.

In the current issue of Design New England, we included a fantastic bathroom in a Vermont guesthouse retreat. The walls are painted a luminous dusty gold, the shower is sheathed with glass, the floor has a pebble inlay, and concrete slabs serve as countertop, storage shelves, and shower bench. Indulging their passion to celebrate the gorgeous rural landscape outside, the owners created a natural space where their guests could relax in comfort and style. It reminded me of other Design New England bathrooms that push the limits of design. Though not necessarily extravagant, these bathrooms from our archives are luxurious and prove if you think outside the box, you can create a spectacular place to wash up.

There’s no small vanity mirror in this Cambridge, Massachusetts, contemporary powder room (“Quoting Style” January/February 2008). An entire wall is the mirror. It reflects a glass panel, behind which water flows in silent sheets forming a contemplative backdrop for Pablo Picasso’s quote, “everything you can imagine is real.” A complex thought in a daringly simple space.

In interior designer Jean Raymond’s Dover, Massachusetts, home (“Perfect Profile” March/April 2008) a dramatic, stand-alone tub is the architectural focal point. However it is the ceiling-mounted tap — which Raymond says is “like a soothing waterfall” when it comes time to fill the tub — that takes this bathroom to “wow!” factor.

Just add a saturated hue to the wall such as this royal purple in a penthouse bathroom in Boston’s Beacon Hill (“American Graphic” March/April 2009) and the result is sure to turn heads. Add a perfectly matched shower curtain and complementary oversize hurricane vases and this bathroom is a regal coup.

Imagine being in this master bathroom, where the entire ceiling is boldly made of glass. Part of a Duxbury, Massachusetts, vacation house (“Tropic of New England” March/April 2010), the owner was inspired by dwellings in Bali, where indoor and outside spaces seamlessly mesh. Here, of course, the view of the treetops might include snow.

A glass walk-in shower is at the center of this expansive master bathroom in a Wellesley, Massachusetts, house (“Custom Fit” January/February 2011). The shower, set between two windows and below a large skylight, gets so much natural light that the bather might imagine he’s outdoors. The shower seat and vanity countertop are made of Corian, a material that plays to the clean look of the fiberglass tub.

A curved wall sheathed in fieldstone was the special request interior designer Karen O’Brien made happen for her sister and client in her North Hampton, New Hampshire house (“Family Affair” January/February 2011). A sliver of a window runs floor to ceiling, and a chandelier hangs above the Kohler tub, which is serviced by tall free-standing faucets. 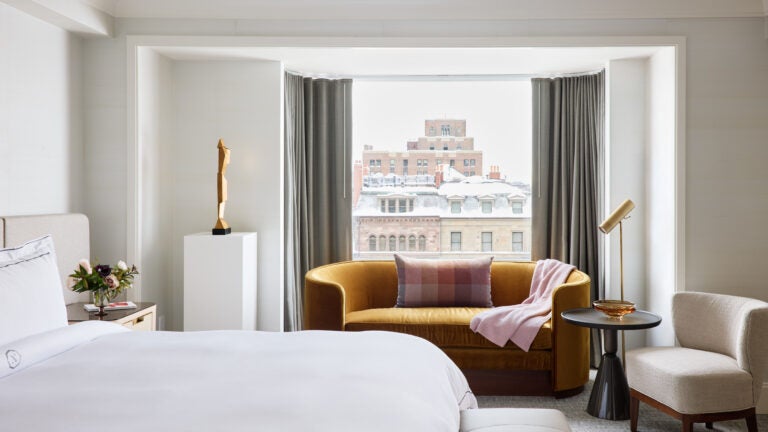 Look inside The Newbury Boston, which just opened after a two-year renovation