Author and historian David McCullough and his wife, Rosalee, call Boston’s Back Bay home as they settle into an apartment they refurbished and furnished with Boston designer Mike Witt.

Readers beguiled by the tale of David and Rosalee McCullough’s new Back Bay apartment in the March/April issue of Design New England might wonder just who is this Boston interior designer Mike Witt who handled the plum assignment so deftly.

Mike Witt stands in the McCulloughs’s library/dining room, where new bookcases were built by the couple’s son, builder William B. McCullough of Hingham, Massachusetts.

“Think of me as the new kid on the block, in the best sense of the term,”
says Witt with a grin. “That’s the kind of excitement and energy that I feel in each new assignment.”
Witt, in fact, has been steeped in the world of decorative arts for two decades, as co-owner of JMW Gallery, purveyor of 20th-century ceramics, furniture and art, in Boston’s Leather District. It’s only six years since he veered course, while keeping his gallery connections, to concentrate on interior design. It was a move triggered when Boston customers, who transferred to Palo Alto, California, asked him to submit a proposal for decorating their new, modern house. (They had already been through one California designer and were unhappy with a second when they contacted Witt.) For the next several months, he commuted to the West Coast in order to help them implement their modern vision so successfully that the result was published in Architectural Digest in November 2006. That’s when interior design became his main focus.

An octagonal English Gothic oak table with green leather top is at the center of the dining room, which has built-in bookshelves along one wall and David’s workstation at the end, where his Royal typewriter is set on a 1950s table.

The McCulloughs’s Back Bay apartment and the Palo Alto house couldn’t be more dissimilar, proof positive that Witt means it when he says he considers each project a new adventure. He’s comfortable working in different styles and periods because, as he puts it, “good design always works well together.” He adds, “What I’m not interested in doing is creating a period room with a museum persona. It’s very important to me to address today’s needs first, and let the embellishments illustrate the clients’ personalities.”

For the McCulloughs, Witt’s magic lay in bringing freshness into a new chapter of their lives, while keeping everything in character. In the living room, a marvelous saffron-colored wool and silk rug that would work well in any eclectic interior is a perfect backdrop for the mix of paisley on the rolled-arm sofa, wool flannel check on the his-and-her wing chairs, and stunning embroidered stripe from Old World Weavers at the windows. “He understood our story,” says Rosalee. “This apartment is who we are.”

The kitchen is understated and timeless. Existing cabinetry was updated with new hardware, wood countertops were added, and covers were removed to reveal the room’s vintage radiators.

Her comment jibes perfectly with Witt’s personal design goals. “I don’t have a particular look, and I wouldn’t want to be pigeon-holed,” he says. “When I walk away from a job, it should reflect the clients, not me.” 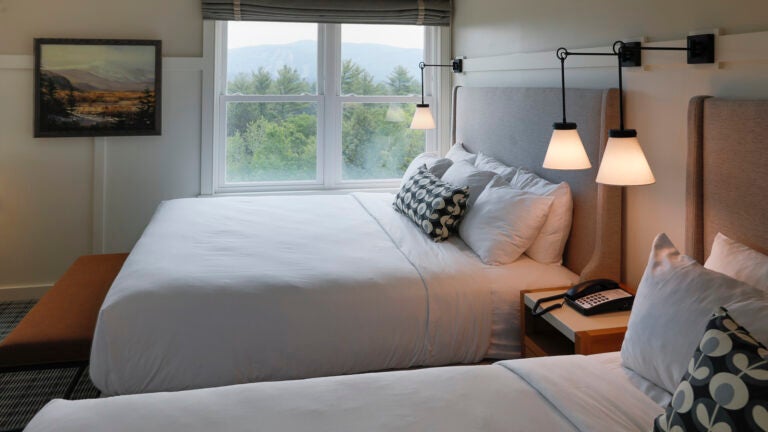 This hotel in the White Mountains just received a $3.5 million makeover