After reading about Andy Warhol’s rambling summer house in Montauk, New York, in Jill Connors’s piece on a Rhode Island cottage built in its image (“Pastoral Wharhol,” Design New England, May/June 2013), we had a renewed intrigue in this painter of soup cans and super stars. So we are anxiously anticipating the opening of Andy Warhol: American Icon at the Ogunquit Museum of American Art in Ogunquit, Maine.

In addition to 20 original Warhol works, including a version of his Marilyn series, the show will feature 60 previously unseen photographs of Warhol with other icons of the day such as Dolly Parton, Mick Jagger, Jack Nicholson, Rodney Dangerfield, and Ted Kennedy. Pat Hackett, Warhol’s secretary, traveled with Warhol and took the photos. She also edited The Warhol Diaries published by Warner Books two years after Warhol’s death in 1987. The 807-page tome is a compilation of notes Hackett took during her daily 9 a.m. phone conversation with her boss. Initially prompted by annual IRS audits, Warhol would call and dictate the details of his activities of the previous day — what he’d spent, where he’d gone, and what he’d done. She took notes in longhand, typed them up later in the day, and kept the more than 20,000 pages that documented the last 11 years of his life. Lucky for us, she took some pictures along the way.

The show opens July 14 and will be up through September 1. There’s a preview reception and gala on Saturday, July 13 from 6 to 8 p.m. at the museum, which is itself a cultural gem in a magical location overlooking the entrance to Perkins Cove. Warhol, who never missed a party, would approve. 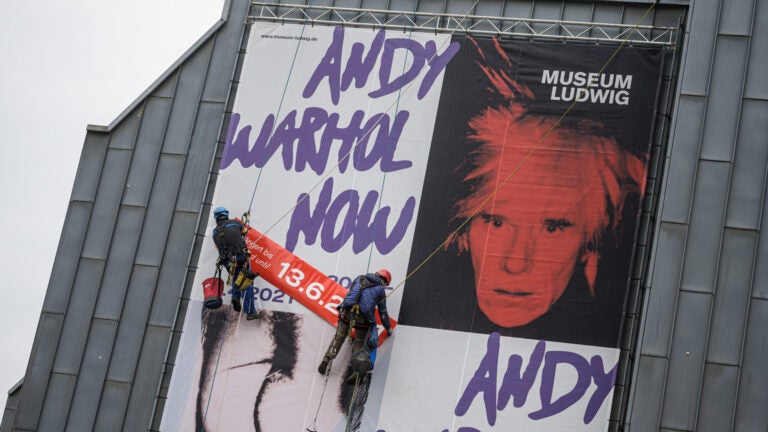