The Italianate Garden designed by Frederick Law Olmsted and John Charles Olmsted between 1914 and 1928 at Elm Bank in Wellesley, Massachusetts, will be the setting for the Massachusetts Horticultural Society’s Downton Abbey-Inspired Garden Party.

Need to scratch that Downton Abbey itch while waiting for Season Four to start in January? The Massachusetts Horticultural Society has just the thing for those of us jonesing for the post-Edwardian PBS drama: a Downton Abbey-Inspired Garden Party at its Gardens at Elm Bank in Wellesley, Massachusetts. The gala event is September 15 and will have some of the decadent decor and glamorous costumes (gold, velvet, tassels!) if not the elaborate tangle of characters and relationships that propel the fictional English storyline. The event is a fundraiser to support the society’s garden-to-table program, which educates the public about growing, cooking, and preserving food and donates fresh, organic produce to families in need. Tickets are $125 and available at masshort.org or by calling 508-259-0470.

Best costume and hat prizes will be awarded, so be sure to dress the part!

The ornate Highclere Castle in Hampshire, England, was used for filming the exterior shots and some interior scenes for Downton Abbey.

Last year, the garden-to-table program donated more than 3,500 pounds of vegetables to two area food pantries for distribution. Event committee members Abigail Fiske, Elaine Fiske, Harriett Hallagan, Susan Hammond, Gardi Hauck, Lisa Kamer, Leslie Mann, and Mercy Wheeler expect gala to raise $20,000, which will enable the program to grow and flourish.
The party starts at 3 p.m. in the beautiful gardens created by Frederick Law Olmsted and John Charles Olmsted between 1914 and 1928. Guests will be treated to a cricket match with players from the Colonial Cavaliers Cricket Club of Boston. At 5:30 p.m., the doors will open to the historic Hunnewell Building for Pimm’s Cups and cocktails, hors d’ouevres from The Catered Affair of Boston, and music by the Wellesley Symphony Orchestra String Quartet. Karen August of the August Auction Company will exhibit vintage clothing from the Downton Abbey era and explain the evolution of the couture.

Cricket players from the Colonial Cavaliers Cricket Club of Boston will show off their skills at the Downton Abbey festivities.

Vintage gowns from Augusta Auction Company will be on view during the event.

Floral arrangements donated by The Plant Bazaar Florist of Westborough, Massachusetts, Hudson Designs of Wellesley, and Alison Campbell Design of Natick, Massachusetts, will add to the period look as will replica urns, cast from estate originals, from Artefact Home|Garden of Belmont, Massachusetts (Artefact will also donate 20 percent of container sales in the month of September to the cause). Craig Sutton, an event planner in Framingham, Massachusetts, is donating lighting and sound system services, Seasons Four of Lexington, Massachusetts, is supplying outdoor seating, and Kyle and Leslie Mann of Gibson Sotheby’s International Realty is sponsoring the bar. Cheers! 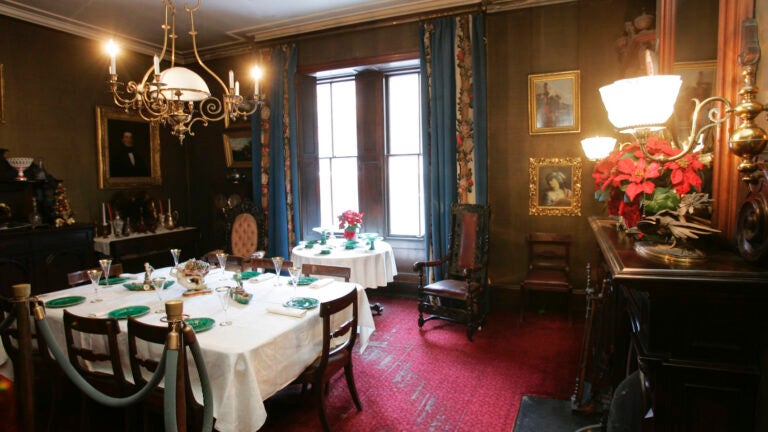