(From left): Doug Garrabrants, Dave Taubeneck, Lena Fransioli, Sally Wilson, and John Kelsey — the design team for a piano in the Celebrity Series of Boston’s “Play Me, I’m Yours!”

The Celebrity Series of Boston is bringing “Play Me, I’m Yours!” — a public art installation created by artist Luke Jerram in 2008 — to Boston. From September 27 to October 14, 75 pianos will be placed in public spaces throughout the city and in parts of Cambridge, Somerville, and Brookline for people to play at their leisure. Having installed more than 1,000 pianos in 37 cities worldwide (Jerram talks about the concept here), the installation is making an impact on pianists and their listeners, and on participants in Boston’s design community.

As soon as interior designer Sally Wilson, a pianist herself, and her husband architect John Kelsey of Wilson Kelsey Design in Boston and Salem, Massachusetts, learned of the Boston event, they put together a team that included Lena Fransioli and Doug Garrabrants of Zoë Design of Wenham, Massachusetts, and Dave Taubeneck of Fantastic Finishes of Peabody, Massachusetts, to create a piano that would look as good as it sounds.
When Kelsey learned that more than half the pianos in the “Play Me” program lacked benches, he turned to our friends at Woodmeister Master Builders who agreed to craft 45 benches for the installation. The shop put out simple yet sturdy seats with an interlocking X design for the legs. Parts were cut on a CNC (computer numerical control) machine that automates the programmed cutting and the benches were assembled, sanded, and given a coat of white primer so each creative team could finish them as they pleased.
Back to the Wilson Kelsey team piano. Garragrants come up with a concept involving feathers, the guinea hen variety, since he and Fransioli have these speckled fowl roaming their property. For the body of the piano, Garrabrants laid the feathers out in a tight overlap and photographed them. Wilson and Kelsey came up with an ikat design for the border, which Garrabrants digitally created. Then the entire scheme was sized for the shape of the donated Yamaha and printed on wallpaper, which they adhered to the piano’s surface. Taubeneck mixed a custom dark brown paint for the piano, and finished it with clear lacquer.

Detail of the ikat border next to the feathers, separated by a gold Aqua Leaf stripe.

The guinea hen wallpaper is now in Zoë Designs library, which features wallpapers depicting many patterns and panoramic murals. Zoë also has a licensing agreement with the Peabody Essex Museum to produce wallpapers from imagery in its collection.

The finished piano with the event’s signature quote running along the side.

The team’s piano, hosted by Mary Baker Eddy Library and donated by The Boston Conservatory, will be located in the Mary Baker Eddy Library at the Christian Science Center in Boston. Locations of the other participating pianos are listed on the Street Pianos website, and include designs by individual artists and groups such as the Huntington Theatre Production Crew, the Boston Arts Academy,

The finished piano benches are simple and sleek, and can be finished as the piano designers see fit.

In honor of the installation and the Celebrity Series of Boston’s 75th anniversary, there will be a Kick-Off Party for “Play Me, I’m Yours!” at The Galleria Atrium, 12
St. James Avenue in Boston on Saturday October 5. Get your tickets now!
Great design is always at your fingertips — read the September/October 2013 issue online! 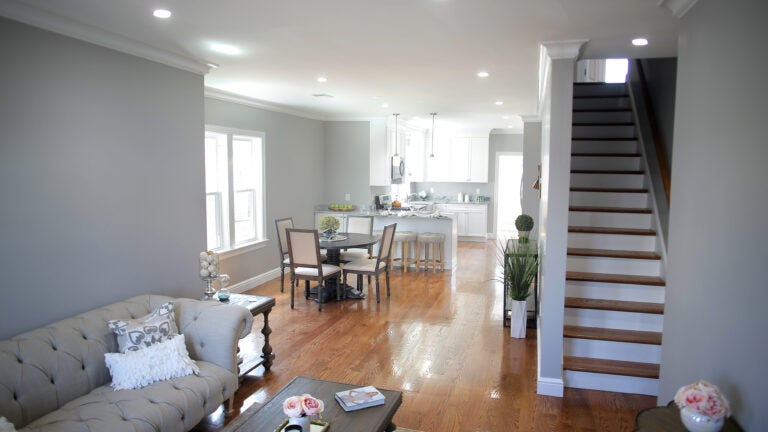 How to slow-walk your renovation: Fix one room at a time