On a perfect early spring day on America’s most beautiful college campus, when thoughts ought to turn to romance and throwing Frisbees, hundreds of people crowded into Princeton University’s Alexander Hall in Princeton, New Jersey, to pay homage to Michael Graves. The architect, industrial designer, professor, and painter died in March at the age of 80. The huge turnout was a fitting tribute to the man who became an icon of contemporary design.

If Graves was known to the general public it was as the spokesman for a line of household wares that he designed for the retail chain Target. Most famous of these was the hugely successful Whistling Bird Teakettle, conceived in 1985, manufactured by the Italian company Alessi, and still in production. (We have a Michael Graves bread knife, soap dish, and teakettle in our house.) Some eyebrows were raised in the architectural profession when the Indiana native showed up in Target commercials. Yet, the Harvard trained architect was carrying on the noble tradition of the Arts and Crafts Movement, as well as the Bauhaus, by creating affordable works of art to enrich everyday lives.

Graves’ industrial design took a remarkable turn when, a dozen years ago, he was paralyzed from the chest down due to a spinal infection and confined to a wheelchair. Several speakers addressed Graves’ work for the disabled, noting his creation of radically new wheelchairs, medical equipment, and even an entire rehabilitation hospital in Omaha. The day before his death, the architect attended a meeting of the United States Access Board, to which President Barack Obama had appointed him. Being wheelchair bound did not keep Graves from visiting China last year where he has designed a school of architecture in Wenzhou that carries his name.

My first teaching job was at Princeton, and thus I remember Graves as a dashing and charismatic colleague. During that exciting, early phase of his career, he was an acolyte of Le Corbusier (his signature even copied the master’s) and best known for his teaching and visionary drawings. He created a series of white houses on pilotis, with primary-color accents, joining a group of like-minded architects who called themselves The New York Five (also known as The Whites for their neo-Corbusian purity).

I next encountered Graves in 1982 when he won the prestigious competition to build a headquarters for Humana in Louisville, Kentucky, where I was then teaching. That skyscraper, along with the Portland Building in Oregon, with their varied and colorful materials, columns, and historical references marked the high-water mark of Post-Modernism. Michael Graves was both successful and famous with perhaps his favorite work of the period being buildings for Disney, including the eponymously decorated Swan and Dolphin resorts at Walt Disney World in Orlando, Florida. When taste for Post-Modern forms waned, Graves reinvented himself as an industrial designer, further confirmed his love of Italy in a reinvigorated neo-classicism, and devoted more time to painting.

Of the score of eulogizers at Princeton, the most poignant were by the surviving members of The New York Five, Richard Meier and Peter Eisenman. These two recalled the heady days of 1960s architectural revolution. Meier, all in black, with his huge mane of white hair, looked like some sort of Biblical prophet on the stage of the Romanesque Revival auditorium. The more casually dressed Eisenman closed the service with tales of a remarkable friendship in creativity that began over half a century ago.

Peter Eisenman speaking at the memorial service and showing a photograph of Graves and himself in the 1960s. 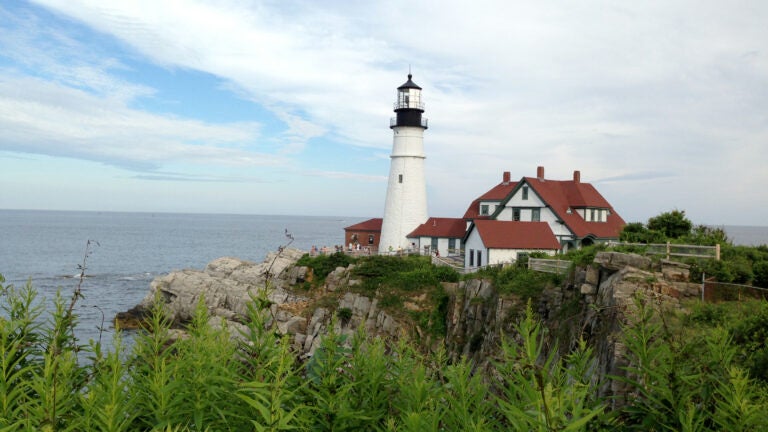 30 historical places to visit this fall in New England