The 1839 summer cottage called Kingscote was designed by Richard Upjohn in Gothic Revival style and includes a polygonal tower. Photo by Ira Kerns.

Many people equate Newport, Rhode Island’s architecture with the Gilded Age mansions built in the 1890s through the 1910s for such families as the Vanderbilts and Astors. But Newport has stunning examples of many architectural eras, and it is the little-discussed pre-Gilded Age era that is the focus of the 6th Annual Architectural Symposium sponsored by International Tennis Hall of Fame & Museum in Newport on Saturday, May 2.

“Eve of the Gilded Age: Newport Architecture 1830-1880” is a day-long event that includes not only lectures by architectural historians but also a look inside four significant houses, three of them privately owned and thus never open for public tours.
The importance of the pre-Gilded Age era stems from the varied stylistic elements that architects of the day began to use to create distinctive — and large — summer residences. When later developed, these elements, such as European-influenced crenellated towers and Gothic arches, became hallmarks of the Gilded Age.
The symposium’s featured architects include Richard Upjohn, Alexander Jackson Davis, and both George Champlin Mason Sr. and Jr. Following the morning lectures and lunch on the veranda of the Tennis Hall of Fame, attendees can tour four houses considered important representations of the era.
Kingscote: Designed by Richard Upjohn in 1839 as an ornamental summer cottage, the house has Gothic Revival towers and arches. An 1880s renovation designed by McKim, Mead & White includes glass brick ceiling panels by Louis Comfort Tiffany. Kingscote is a property of the Preservation Society of Newport County.
Malbone Hall: Designed by Alexander Jackson Davis in 1849, this sandstone mansion includes crenellated towers and formal gardens.
Gravel Court: This 1865 villa was designed by local architect George Champlin Mason Sr. and includes elements of Italianate style. The house is just two rooms deep and the southern rooms open to porches and lawn.

Stained glass windows enhance the main stair landing of the 1882 Morris House, designed by George Champlin Mason Sr. and Jr.
The Morris House includes a variety of elements such as shingle-style decoration and acanthus swags, and represents the growing interest in Colonial Revival style.

The lecture portion of the symposium is held at the Casino Theatre, itself an architectural gem, dating from the 1880s and designed by McKim, Mead, & White. This year’s lecturers include University of Virginia architecture professor Richard Guy Wilson; architectural historian John R. Tschirch; and University of Rhode Island art history professor Ronald J. Onorato. The Casino Theatre is part of the International Tennis Hall of Fame & Museum, the organization that has hosted the event every year. For more information, visit tennisfame.com.
Great design is always at your fingertips! Read Design New England’s March/April 2015 issue online! 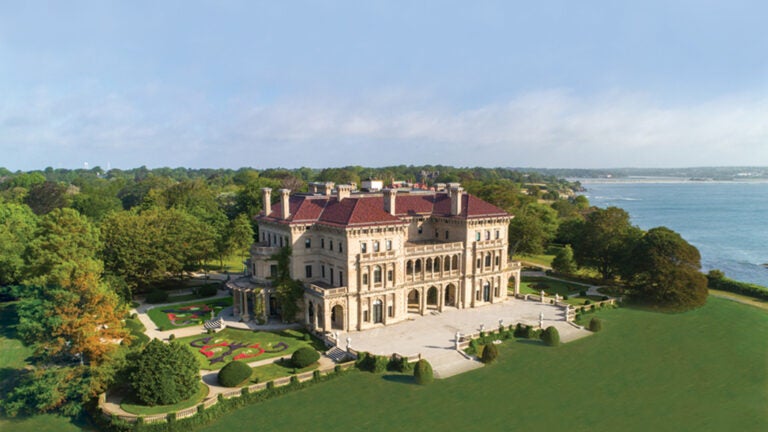 Here's how an iconic Newport mansion's landscape is changing