The kitchen on the cover of our January/February 2016 Kitchens + Baths issue — on newsstands and online next week — is as bright, cheery, and colorful, as we predict the year ahead of us will be. In an 1800 Georgian house in Sudbury, Massachusetts, photographed by Michael J. Lee, the kitchen and an adjoining sunroom were gutted so interior designer Mally Skok could reconfigure the spaces to function as the heart of the home. Design New England Editor-at-Large Jill Connors voices how it was done with colorful aesthetic decisions such as painting the kitchen island cabinetry Farrow & Ball’s saturated Hague Blue to complement the blues in the cement floor tiles. Nearby in Lincoln, Massachusetts, an idyllic blueberry farm is the setting for a Modern house designed by two architects — one in Boston and one in Shanghai — while on a river on Cape Cod, a “mess hall” completes a family’s summer compound. We also asked designers to use their favorite cookbook as kitchen inspiration, toured B.F. Clyde’s Cider Mill in Connecticut, and visited caterer-turned-interior designer Holly Joe’s kitchen in Westwood, Massachusetts, where she whipped up scrumptious chocolate chip cookies. 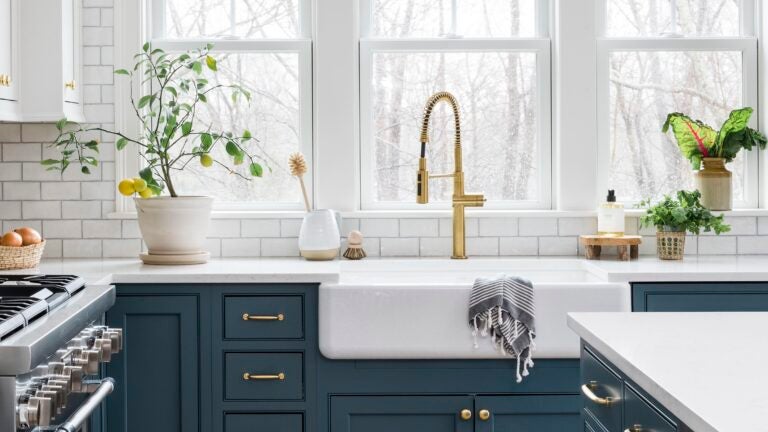 Room to Love: Playing all the angles