Comedian Brody Stevens knows how to turn tragedy into triumph. In 2011, the “Hangover’’ and “Due Date’’ actor unfortunately hit rock bottom when a mental breakdown – which he live tweeted – landed him in a L.A. hospital. However, with the help of friend Zach Galifianakis, the dark moment would become the basis of his hit HBO and Comedy Central-produced documentary series, “Brody Stevens: Enjoy It!’’

Stevens, who will be performing at Johnny D’s in Somerville Thursday night, spoke over the phone with Boston.com recently to chat about his career. See what the comedian had to say about his past mental health issues, his friendship with Galifianakis, as well as his upcoming show.

Boston.com: What was it like putting your past mental health issues on television with your HBO and Comedy Central series, “Enjoy It!’’?

Brody Stevens: When I did the show, I kept that, you know, real, instinctive element in. And I also was aware that I was performing. So yeah, things are, you know, amplified. But because, when it happened to me, when I went haywire, I felt that, because I did it on Twitter, I was tweeting and I was so in a euphoric mode. It was just comedy, reality – whatever! When I came to, a lot of people knew that I had something go wrong. So I went on Twitter and did it. Not by choice, it just happened. So that was already out there. When I was in the hospital, when I started relaxing and coming around, in my head, I felt like I made a mistake. I feel like this bi-polar, manic episode that happened to me, I still feel like it was a mistake in my mind. That allowed me to be a little more open about it. I said look, if you’re taking meds – it was like a safety PSA – if you’re taking your meds and you are going to lower them, do it with doctor’s guidance. Look what happened to me. That can happen to you. As opposed to, I was on meds the whole time – but wasn’t on meds at all to begin with – and I had an episode. That’s kind of scary, you know? I had a reaction. So that actually gave me comfort in going, you know what, I’ll do that.

Then, when I was in the hospital, it’s just like, I wanted to keep it real from the beginning. That stuff with my sister and my mom, I came up with that opening. That’s kind of where I was going. I was going to talk reality and be open with my sister and, again, just go for it. It wasn’t a conscience choice but it wasn’t so bad. It was bad! I mean, yeah, it was bad. I’ll tell you what. When the HBO one aired, it was hard for me. When I first watched it and saw those episodes too – this is good TV. And it was. Yeah, it was. And that was hard for me. The second go around, that issue wasn’t hard for me. It wasn’t awkward. But there were certain comedic elements in certain things that bothered me or felt uncomfortable.

Boston.com: Now that the show is out there, have you gotten recognized more on the street?

Stevens: Yeah! I notice it. I notice people looking at me more. I notice people coming up to me. I notice that comedy – they know my face. So it helps my stand-up so far. I haven’t even gone on the road yet, I’ve only been here in L.A. When I go to Boston it’s going to be kind of my first time getting outside Hollywood and see the power of this. I’m curious. But it’s been positive!

Boston.com: Speaking of Boston, you came to town last year to shoot your special for Comedy Central. How do you approach audiences that may not be familiar with your work outside of the L.A. scene?

Stevens: When I think about that, it’s kind of daunting for me. I know I used the word daunting, I’m just being honest. This is part of some extra nerves because, one, yeah, they may not be familiar with my work. I’m going there with the attitude that half the audience or a third knows me. That’s my attitude. I’m going there with that approach. And, within that approach, I feel that I’m going to be comfortable, more so, and relaxed. It doesn’t matter to me. I know where I’m performing. If I was say in Seattle, I would do all Seattle stuff. I’ve been there. If I was in Minnesota, I would do all Minnesota stuff.

I’ve performed here in Los Angeles at the Comedy Store, that’s people from all over the world. I used to do youth hostels where you can’t do any reference outside of Disneyland or something like that. So, I’m not like, “Oh, I’m not going to do well in Boston because they don’t know me.’’ I don’t feel like the audience in L.A. – they’re even worse. Not even worse. But in terms of, when it comes to that, it’s such a hodgepodge out here. It makes you a different kind of comedian. I’ll say that because the crowds here are jaded. You can go to a club and see high famous people one night. Louis C.K. dropping in and Chris Rock – yeah that happens in New York. But in L.A., you’ll get three or four of them. Or you’ll go to a comedy show and go, I know this guy, I know that guy from TV. So, that makes an audience different from say a Boston audience or someplace other than Los Angeles.

Boston.com: Especially on Twitter, you talk a lot about having a positive mindset and giving off a good vibe. Have you always been that way?

I feel like, yeah I put out positive energy towards others. But people think like, “Oh Brody, all you do is talk about positivity. You’re that guy.’’ It’s stating the obvious, kind of, just a reminder. And it’s funny, sometimes. I’m letting people know, even though I’m not impossible to be, I am kind of hard on myself. So that’s another thing that I think people appreciate. I think everyone is constantly evolving and changing, so that’s good. People think I’m funny if I’m being myself and honest. That’s why people can relate to me on that level, because I’m entertaining them a little bit and I’m actually being honest.

I know that you are good friends with Zach Galifianakis. How’d you two meet?

Stevens: I met Zach, he won’t cop to this, but we met in New York once or twice. Maybe just once. But the minute I saw him on stage doing stand-up in New York that he was hosting, I just thought, he’s funny. He’s funny up there. Then I went to a taping of the Sklar Brothers, they had a show at Chelsea Piers on MTV. I was in the audience and Zach was a guest star, it was funny and I thought, this guy’s funny. So, then I moved out to L.A. six months or a year later, whatever, and I think Zach moved out here too, maybe he went a little bit before me. There’s so many little hipster shows out here, which are everywhere, but anyways, I did a show with Zach. Then we both did the Chicago Comedy Festival in 2001 and then went to a baseball game, a Cubs game, and we’re hanging out, hitting it off, having laughs. Then he did his show, we’re both on the same thing, and I went on and he liked goofed around with me. I goofed around back, so he kind of started messing with me in a fun way up there.

Boston.com: When did you two start collaborating with each other?

Stevens: He got that talk show on VH1 and I was the warm-up on it. I got fired. He brought me back. He didn’t fire me, the head guy did. But Zach brought me back. Basically we just goofed around. We’d do Largo, Zach would put me on sketches. He did Jimmy Kimmel, I was on that. “Between Two Ferns,’’ I was on that. And Zach was a good guy. He was not only funny, he was good. I hung out with him because it was fun. Nice person.

I would do warm-ups and Todd Philips liked me doing these shows at Largo, and I auditioned for that, I got “Hangover.’’ Zach helped me get “Hangover 2.’’ I did “Due Date’’ kind of, being a friend, working.

Boston.com: So how did “Enjoy It!’’ come about then?

Stevens: When we started actually talking about doing a pilot, it was me going to the next level. The characters were my sister and my mom and me doing stand-up, getting out of warm-up. So that’s kind of what the pilot was. I came up with this story, which was true. My sister and I reconciling for my mom’s 80th birthday. So I said, here’s my mom, here’s my sister, there’s me. So that’s what we shot. We shot the pilot. I was done doing warm-up at that point, I was actually going to the next level. And this show was part of it kind of. So we did the pilot and HBO liked it. They order six 15-minute episodes. We thought TV, maybe the Internet, whatever. Zach always thought the Internet would be better, and I was fine with that. So we did it. I owe a lot of it to Zach because Zach basically let me do pretty much everything I wanted to do on that show. He gave me complete freedom. He just trusted me, let me be funny. Let me be myself. He never wanted to exploit me. They asked, many times, you don’t have to talk about what happened. You don’t have to get personal. But, because it was already out there, I felt like I could deal with it. I owe a lot to him.

Boston.com: To finish up, what should audiences in Boston expect from your show when you come to town?

Stevens: I’m in a cast – I broke my foot. I stepped off the stage doing warm-up for “@Midnight.’’ My right foot broke a bone. I don’t think I’ll be running around. I will have a cane, which I’m getting used to. There will be a lot of pointing with my cane. There will be smiles. There will be messages of positivity, goofiness. To be honest, I don’t know because, basically, this is my first time going out on the road. I did one show down in San Diego and it was a good experience, but my foot wasn’t broken. I was running around. You can expect I’m going to give 100 percent. I’m going to be hobbling. I’ll do crowd work, I’ll do a Q and A. I will shake hands. I will do my classic bits. People want to hear the funny words, the articulation. I don’t know. 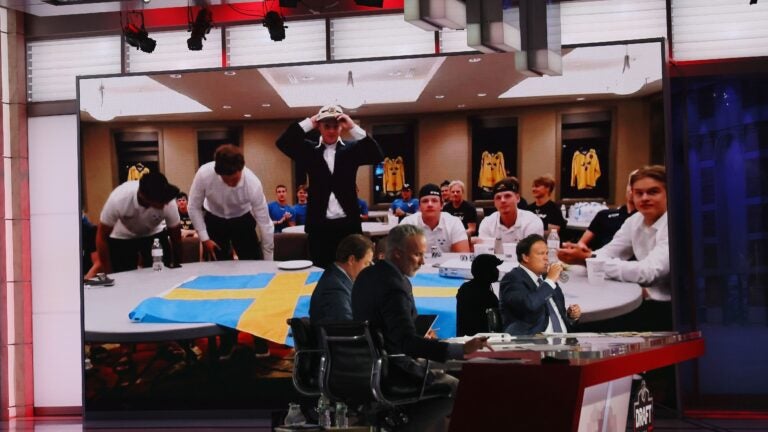