Sink your JAWS into these killer collections!

Some of the biggest fans and collectors of Jaws memorabilia talk about how the movie and collecting set pieces brought them together.

Jaws begins with a scene in which an adventurous young woman runs off for a casual skinny-dip one early summer evening.

Everyone knows what comes next, but the scene isn’t scary just because of the shark lurking in the water, unbeknownst to the woman. In fact, the viewer never even sees the shark, or any blood. The fear comes from a sense of helpless isolation. All of us, even if we never go in the ocean, know what’s like to be alone.

“I don’t even go up to my knees at this point,’’ says Jim Beller. “I love swimming in pools, but even in lakes I’m a little wary.’’

Beller owns the world’s largest collection of Jaws memorabilia. He started collecting in 1975, joining the rest of the nation in that summer’s widespread captivation with the film. But for a while, his obsession only made him feel more isolated.

“For the longest time, before the Internet, I thought I was the only Jaws fan, because everyone I met was either on Star Wars or a different type of movie,’’ says Beller.

Then he met Peter Spadetti and John Campopiano, two men who understood his love of collecting perhaps better than anyone else.

The trio recently came together in Spadetti’s basement — the proving ground of many a great collection — to talk with Boston.com. They talked about how an obsession with a movie can be isolating, until it becomes a bond. Now, the three are united by a shared admiration for the film, the sentimental comfort it brings, and a fascination with what lies beneath the surface. 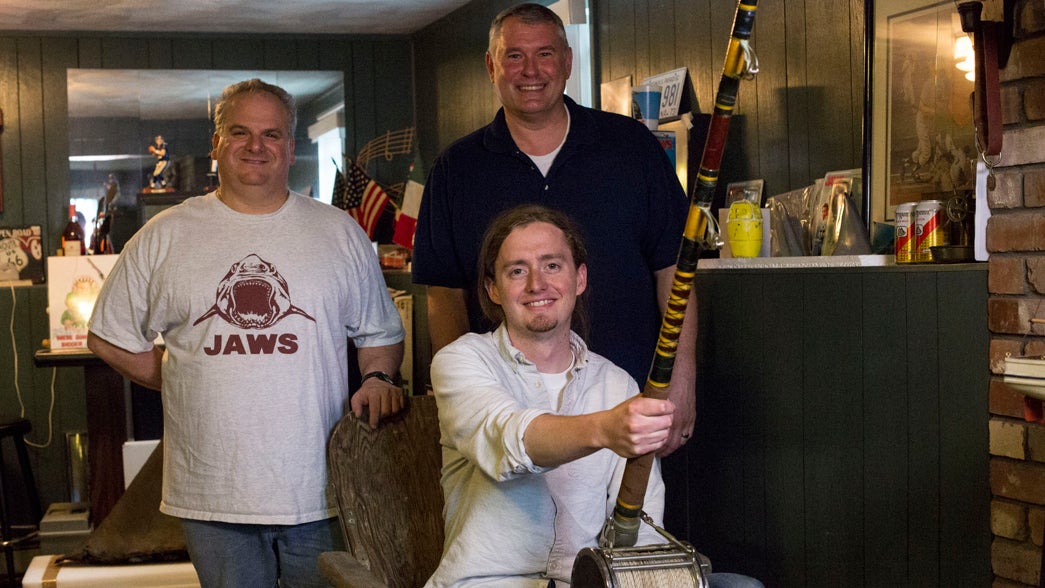 Growing up just north of Boston, Beller fell for Jaws right when it was released in 1975.

“It was the last day of the third grade, and we were waiting for the bell to ring to get out for summer,’’ he says. “Mrs. Griffin, my third-grade teacher, had a Time magazine on her desk, and it had this big shark on it coming out of the water, and it said, ‘Super Shark.’ She said it was a movie about a big monster shark going to the beach and eating people.’’

His parents took him to the Charles Cinema shortly after, and from then on, Jaws was in his blood.

These days, it’s difficult not to be blown away by Beller’s shrine to Jaws. The dedicated cinephile and Steven Spielberg stalwart likens himself to Amity Sheriff Chief Brody, played by Roy Scheider — mostly due to the character’s fear of going in the ocean.

Like Brody, Beller is a leader in his community — that community being the vast group of Jaws collectors. He is instrumental on Jaws Internet forums, always finds leads for other dedicated merch hunters, and never misses an opportunity to engage with newer fans of the movie. A portion of Beller’s collection at his home in Providence.

Beller’s Providence home is now ornamented with fragments of film history, from shark fridge magnets to an expansive Blu-ray disc collection. The highlight, however, is his office, which houses a tiny desk with a computer and a giant library filled to the brim with all things Jaws-related. Every surface is patched with posters, books, and toys. While some of them were imported from abroad, he acquired others directly from the set of the movie. He is hard-pressed to choose a favorite piece, but he seems particularly smitten with his “Bruce tooth,’’ one of the chompers directly from the mouth of the shark.

Spadetti is the Quint of the Jaws collecting world, the seasoned expert always looking for the big fish.

“My personality doesn’t show it,’’ Spadetti says. “But I will push the limit on anything.’’

Photos: When Jawsinvaded the Vineyard (story continues below):

He may not have as many items as Beller, but his big-three treasures draw the envy of many a Jaws collector. In one auction, he nabbed Quint’s fighting chair, his fishing rod, and the shark fin used in the estuary attack scene. At that point, Spadetti was still fairly new to the Jaws community. He calls the trio of movie treasures investments.

After lurking on Jaws discussion forums, he introduced himself when saw people him talking about his big score. “I had to come clean in ’07 because everyone was talking, saying, ‘Some guy got all three,’’’ he said.

Campopiano has trouble comparing himself to a Jaws character.

“I think I’m kind of a hybrid, to be honest,’’ he says. “I understand Chief Brody’s anxiety, I think I’ve got Ellen Brody’s hair, I like a good cocktail, so maybe a little Quint. I’m a mix of everybody. That’s why I love the movie.’’

Interestingly enough, Campopiano doesn’t mention Richard Dreyfuss’s Matt Hooper. But just like Hooper, he has a palpable sense of curiosity and wonderment. His obsession began at age five or six, when he asked to rent Jaws at the video store, again and again.

“The guy at the rental store would tell my parents, ‘You know you’d save yourself some cash if you just bought him the film.’ So they did. They bought me the movie, and it just snowballed from there,’’ he said. 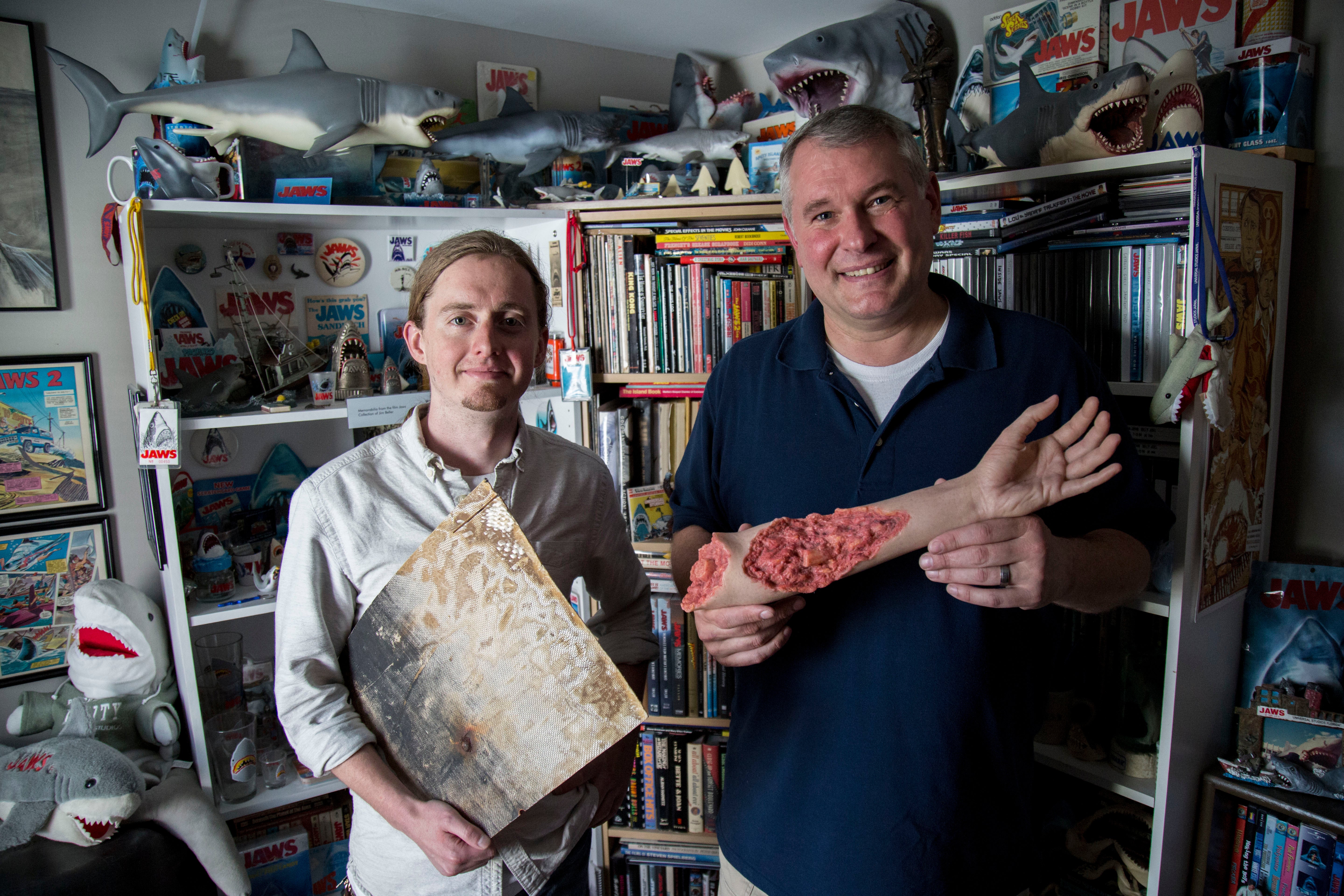 Campopiano’s collection is modest compared to the other two, but he’s found a unique niche. He has a particular eye for foreign Jaws pieces and admits that he’s known in the collecting community for “having an encyclopedic knowledge of Jaws rip-off films.’’

Jaws predates Campopiano, a Pawtucket native, by more than a decade. His curiosity has always been heightened by New England’s presence in the film.

“That was a huge draw for me,’’ he says. “I remember being 14, and my parents took me there for the first time, and they hired a local driver to take me around and show me all of the locations. I couldn’t believe how it was so close to my house. The Vineyard is a character in the film in some ways.’’

One of the words that all three collectors used to describe their affinity for Jaws was “comfort.’’ Which is strange, considering the film is about a shark that terrorizes a cozy vacation town.

“Over time, it goes from being being this scary film to almost like a friend in some corny way,’’ says Campopiano. “I think it’s more about a familiarity with it than anything else. When you’re familiar with something, there’s a kind of inherent comfort that comes with that.’’

For them, preserving material objects is a way of connecting to a bygone era.

“You can turn to Jaws as one of those things that really gives you inspiration,’’ says Spadetti. “The innocence of that age, growing up as a kid, I would not trade that one for anything.’’

For a long time, the three collectors didn’t know if anyone else was so deep into Jaws.

That changed with JawsFest in 2005.

Campopiano was 18 when he made the voyage to Martha’s Vineyard for the event, sporting a T-shirt with a photo of his collection on it. The shirt caught the eye of a photographer, who introduced Campopiano to his brother, Jim Beller. 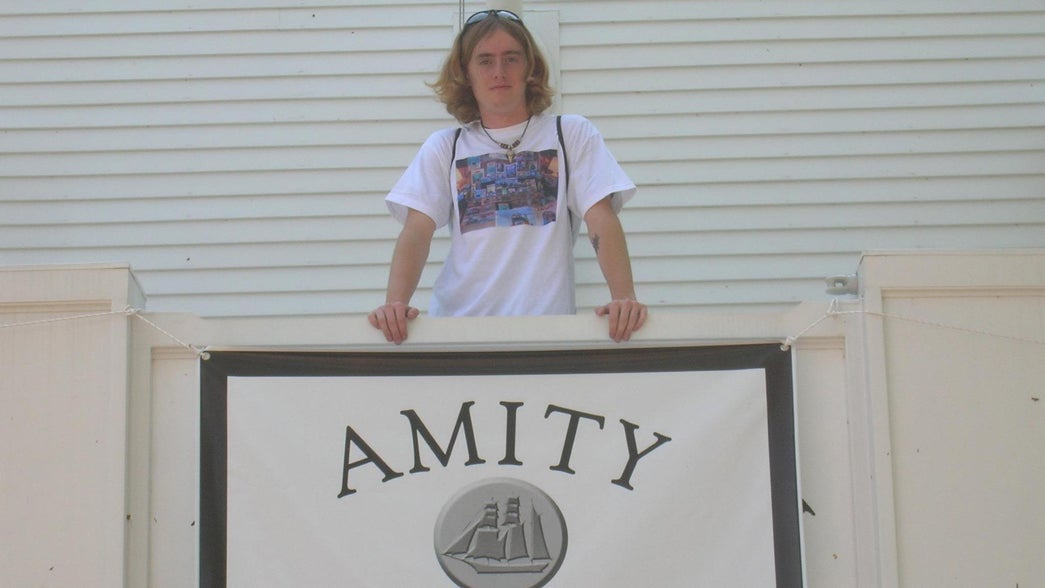 “I thought I was alone, and it was going to be me and my collection forever,’’ says Campopiano. “Then in 2005, when I met everybody, it was just incredible. Meeting people and developing friendships that are now way beyond Jaws.’’

The most powerful scene in Jaws doesn’t even involve the predator itself. The three men, fatigued from shark-hunt failure, sip tin cups of booze and trade scar stories.

What begins as a competition–Hooper pointing to nicks on his ankles and Quint telling his famous shark story from his experience aboard the U.S.S. Indianapolis ends with the three men joyously connecting in drunken song.

“That’s what it’s all about,’’ says Spadetti. “Now many years later, being able to meet a lot of great friends. That really did develop from a lot of this.’’

All three are quick to say how much they support one another.

“I love hearing about other fans’ collections,’’ says Beller. “If I don’t get something, I want to know that another collector took care of it.’’ A model of the final scene from Jaws in Beller’s collection.