Peter Benchley was 27 when he quit his job writing for President Johnson to write a book about a villainous killer shark that stalked, and ate, members of a small island community.

The book sold more than 10 million copies and turned Benchley into a millionaire.

He regretted writing it.

“What I now know, which wasn’t known when I wrote Jaws, is that there is no such thing as a rogue shark which develops a taste for human flesh,’’ Benchley told the Animal Attack Files in 2000. “No one appreciates how vulnerable they are to destruction.’’

Benchley, who first became interested in sharks while spending summers on Nantucket, spent the rest of his life advocating for oceanic conservation.

Simon Thorrold, a senior scientist at the Woods Hole Oceanographic Institute, said Jaws legitimized the hunting of sharks. Humans kill between 50 and 100 million sharks each year, he said, but sharks only kill a handful of humans.

“If you bought into the fact that you had this rogue, cold-blooded killer going around hunting humans, then obviously anything you could do to stop those sharks was good,’’ he said. “It provided cover for people who simply wanted to go out and kill sharks under the guise of somehow making people safer, which there’s no evidence that was the case at all.’’

Instead, Thorrold said the only thing killing sharks does is reduce the population size. The Shark Research Institute found that the populations of eight shark species declined more than 50 percent from 1986 to 2000.

“We have a very poor idea of even how many white sharks are out there,’’ Thorrold said. “But along the East Coast of the U.S., white shark numbers were driven very low compared to comparable populations in South Africa for instance and Australia. So we did something here that was in attempt of reducing white shark numbers that was not necessarily done in those other locations.’’

Humans kills sharks because they’re afraid of them, but experts say they’re actually scared of us. Thorrold said sharks swim away from boats.

“I don’t think they have any interest in human interaction,’’ he said. “I think they’re actively trying to avoid them.’’

The odds of dying in a shark attack are 1 in 3.7 million, according to the Florida Program for Shark Research, and it’s been nearly 80 years since someone died of a shark attack in Massachusetts. Yet, for some, the terror of a real-life Jaws attack persists.

Chris Fischer, founder of OCEARCH, a non-profit organization dedicated to researching great white sharks and other large predators, is trying to replace fear with facts. Anyone can log on to the OCEARCH website and use its global shark tracker to see the true migration patterns of sharks. In doing so, Fischer said they’ll see how sharks aren’t territorial and don’t stalk humans like Jaws did. Instead, he said they’re always on the move.

“We’ve lacked so much data that anyone can fabricate truths or untruths or speculate about sharks,’’ he said. “We’re changing the conversation to be from the fear of the unknown to what real sharks are doing.’’

Even if the Jaws score sends a shudder down your spine, Fischer said it’s important to remember that there would be no fish for us to eat if shark’s didn’t preserve the balance of the ocean.

“Sharks are the lions of the sea,’’ he said. “The ocean won’t thrive if sharks don’t.’’

Photos: Behind the scenes of Jaws 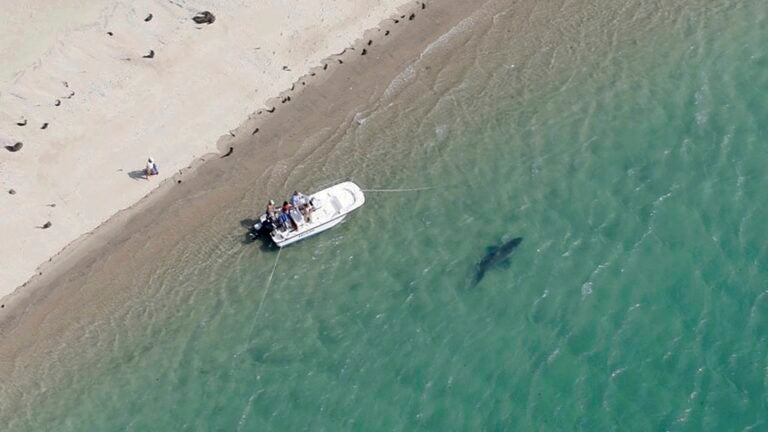