The Simpsons kicks off its 27th season on Sunday at 8 p.m. on Fox. Springfield’s most famous family, which has been dysfunctional since first appearing in 1987, has become an international staple over the last three decades, but it’s still unclear as to which Springield they actually live in.

We scoured years of Simpsons footage to find as many local ties as possible, so that once and for all, we can prove the the Simpsons actually lived in… Springfield, Massachusetts.

Of course, this is just a theory, but we’ve found enough evidence to make our case. Ahead, our semi-comprehensive history of Massachusetts on The Simpsons.

For starters, Mayor Quimby is fashioned (in accent, at least) after Ted Kennedy. Here he is with another Bostonian, the late Leonard Nimoy.

Both Springfields also have a power plant. 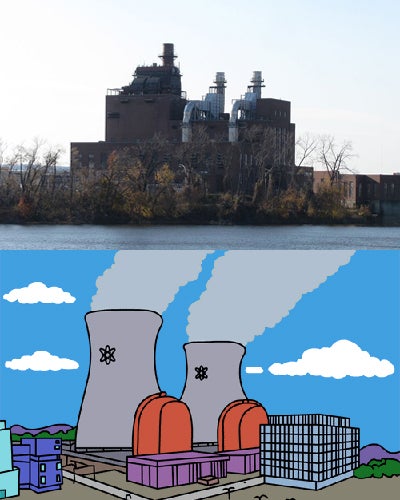 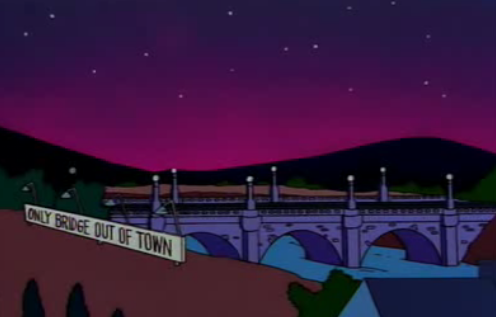 And of all of The Simpsons writers and producers, more of them attended college in Massachusetts than any other state.

Because of this, many Springfield locations were modeled after real locations in Chelmsford, Massachusetts, as detailed in this FOX25 piece:

Milhouse wants to buy “the Carl Yastrzemski baseball card from 1973, when he had big sideburns’’ from the Comic Book Guy. The Comic Book Guy also has a Red Sox pennant hanging in his store. 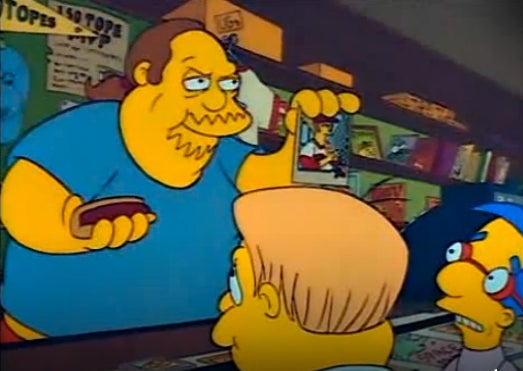 Lionel Hutz claims to have degrees from Harvard, Yale, MIT, Oxford, The Sorbonne and the Louvre.

Albert DeSalvo, “The Boston Strangler,’’ is mentioned in “Ned’s List of Laudable Lefties’’ in Flanders’ Leftorium.

Barney hoped to get into Harvard until Homer hooked him on beer.

A rabid mouse in Boston who attacked and killed a small cat is on the local news.

Marge imagines Bart walking across the stage at Harvard to receive his diploma.

Otto: “I bet I’ll get respect once I get that Harvard diploma.’’ 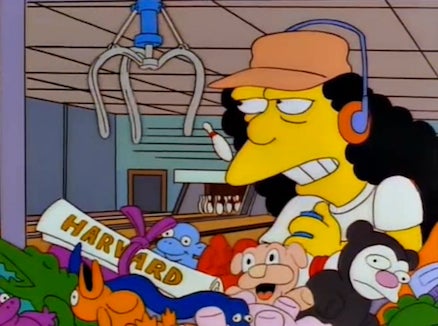 A townie wearing Red Sox garb drunkenly says “wicked pahty, huh?’’ and asks for his friend Sully. He proceeds to get in a fist fight. 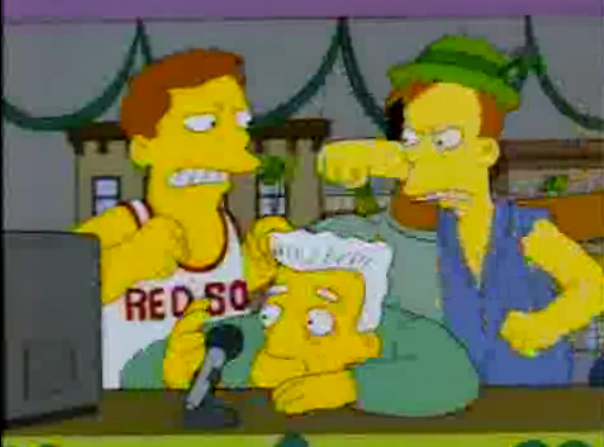 Bart gives Homer a book, saying “Here’s a book called “Chicken Soup for the Loser’’ that gave Bill Buckner the courage to open up a chain of laundromats.’’ 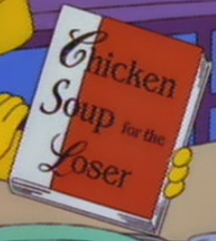 The Simpsons visit a restaurant in Tokyo called Americatown and sit at the Massachusetts table, “I can’t believe they stuck us at Taxachusetts!,’’ Homer says. 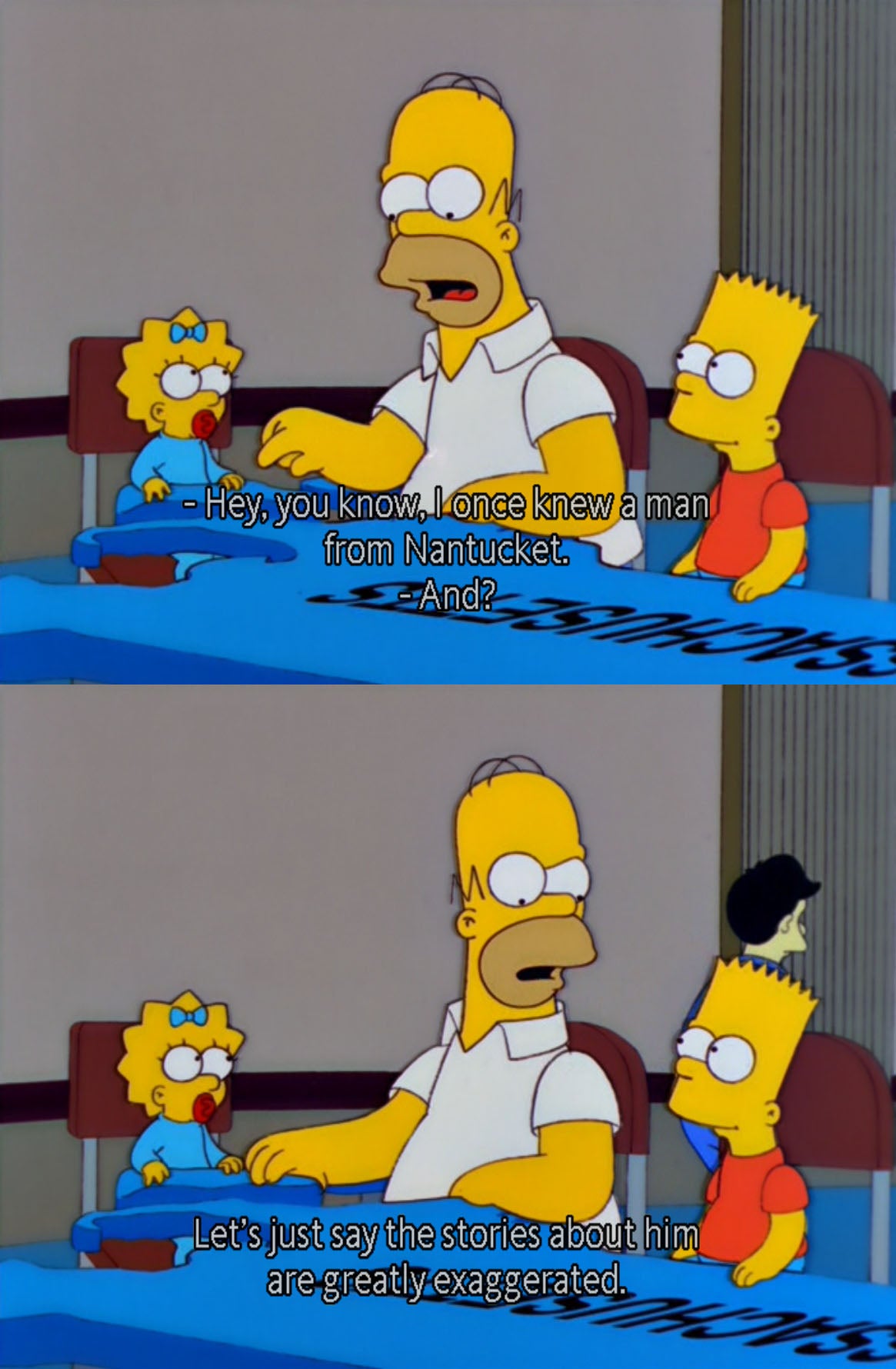 A map of the family’s location is shown that highly resembles that of Springfield, Massachusetts, most notably by the large river running through the town intending to represent the Connecticut River.

Bart and friends join a boy band, similar to NKOTB. In the same episode, Bart wins the Springfield Marathon by paralleling Rosie Ruiz’s cheating in the 1980 Boston Marathon.

Old Springfield residents dumped Duff beer in the river, much like the Boston Tea Party.

Buck McCoy asks if he should wear a Texas or a Massachusetts bolo tie. 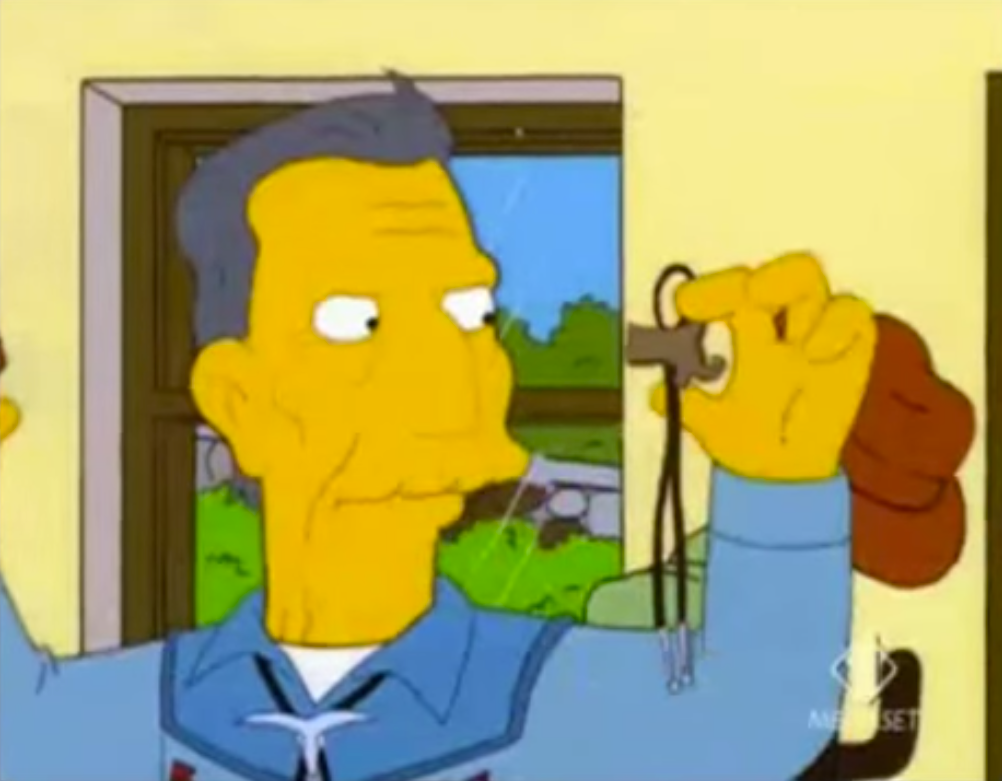 Homer buys a talking astrolabe at Springfield Heights Mall. One of the astrolabe’s screens displays what appears to be its current location. These coordinates (42° N, 71° W) point to Bridgewater, Massachusetts. 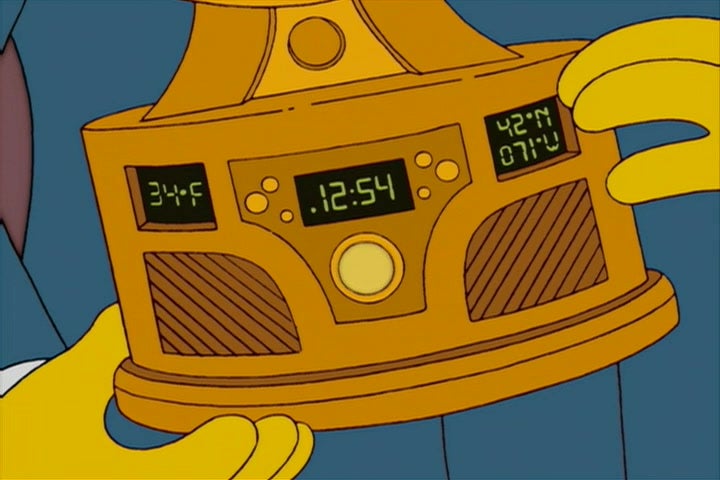 Nantucket is the setting of Marge’s romance novel.

Tom Brady. Riding on a segway. Holding this sign: 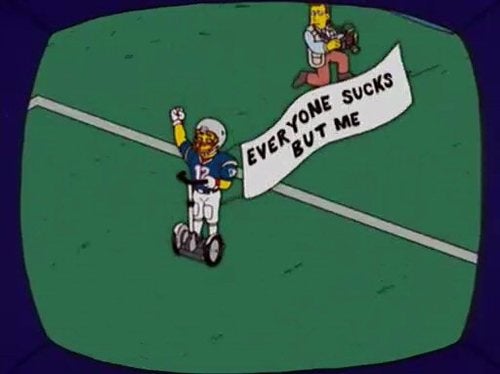 A Massachusetts police car pulls up beside Homer.

Homer: “Wow, troopers from every state in New England.’’

Trooper: “Including Rhode Island. We’re a small state but we give big tickets!’’ 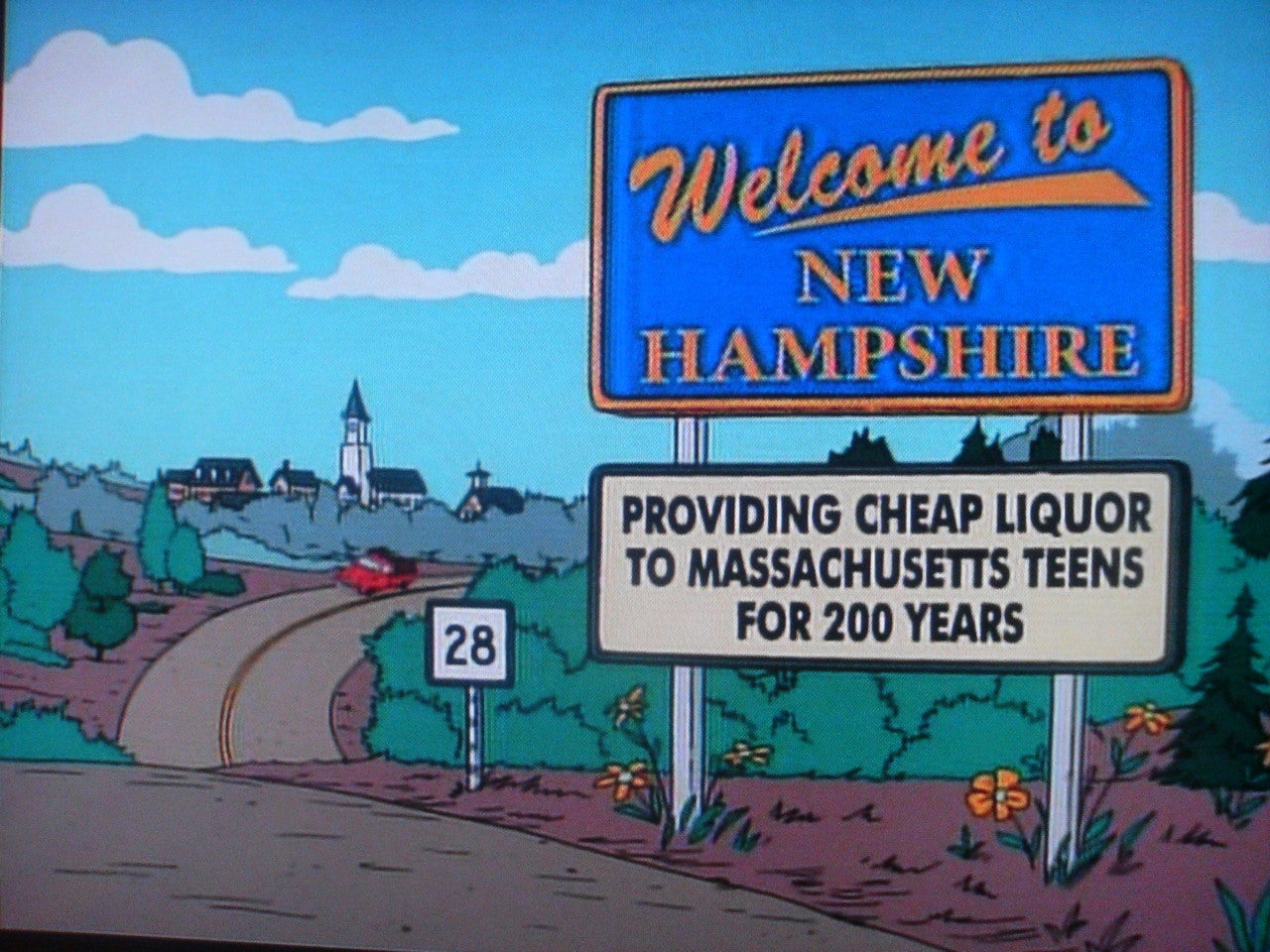 This episode riffs on the famous Boston movie The Departed prominently features “I’m Shipping Up to Boston.’’

Denis Leary wears a Boston hat and Krusty tells him to have a Boston Tea Party. 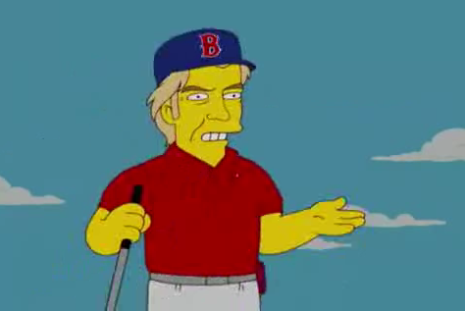 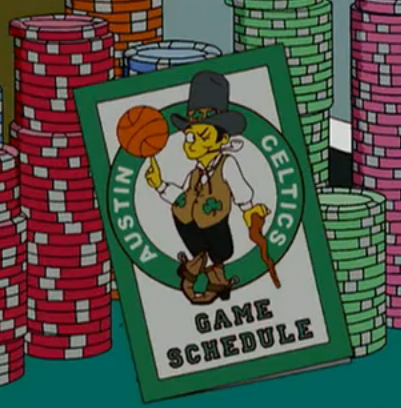 A new teacher named Zachary Vaughn says, “My name is ZV, I just got my master’s in education at Tufts University.’’

Burns own the painting that was stolen from the Isabella Stewart Gardner Museum.

In “Itchy Scratchy in The Social Petwork,’’ Scratchy is wearing a Harvard shirt.

Premium cable executives tell Krusty that the critics will be in his pockets if he switches networks. Krusty asks, “Even the The Boston Phoenix?’’

A scene that depicts “Massachusetts Marriage’’ as a man marrying a lobster in a Celtics T-shirt. 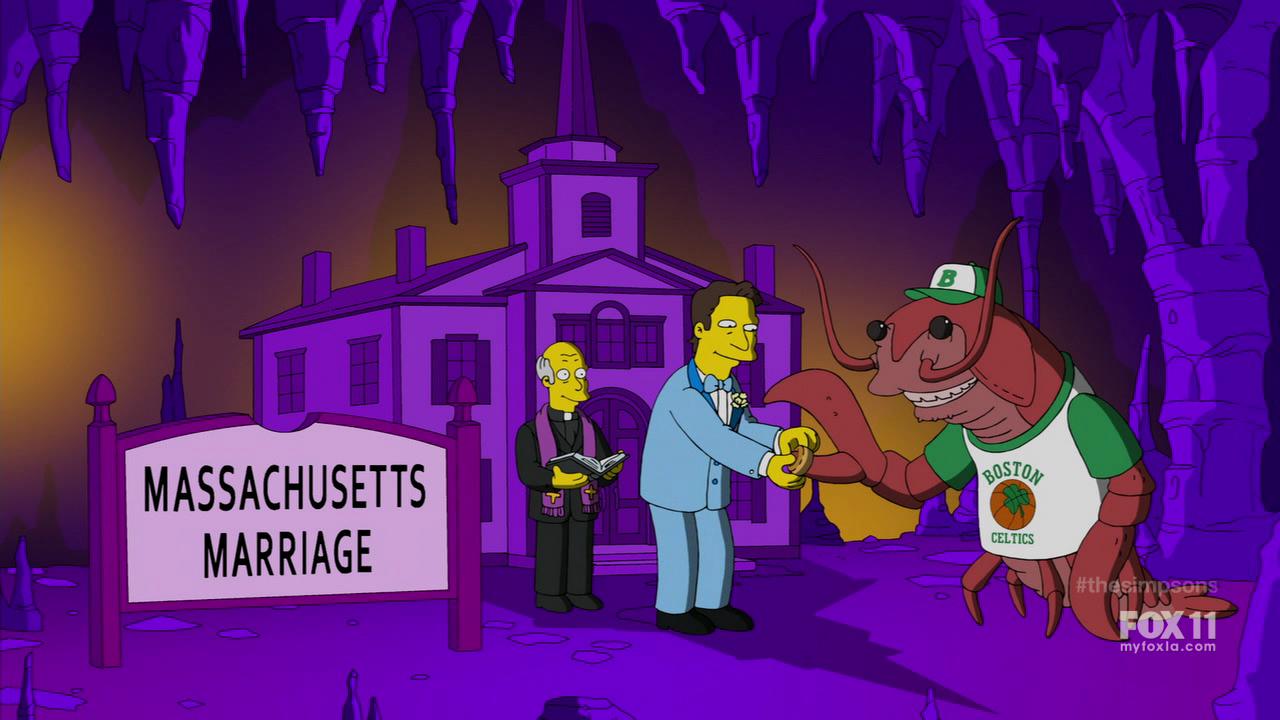 Lisa considers both Harvard and Mount Holyoke for colleges to attend. 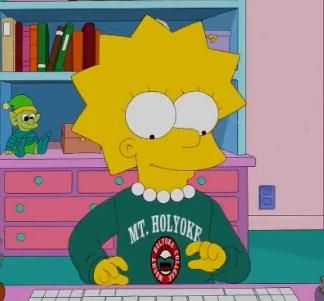 Apu revealed he attended Mumbai Institute of Tantric Sex, where he was recruited by a card-counting ring. “I used the winnings to buy S.A.T. answers to get into the real M.I.T., where I failed every class, got thrown out, and had to move to Springfield.’’ And best of all, theres this real-life ad for Springfield’s semi-qualified lawyer Lionel Hutz, which graces the placemats of Doyle’s Cafe in Jamaica Plain: