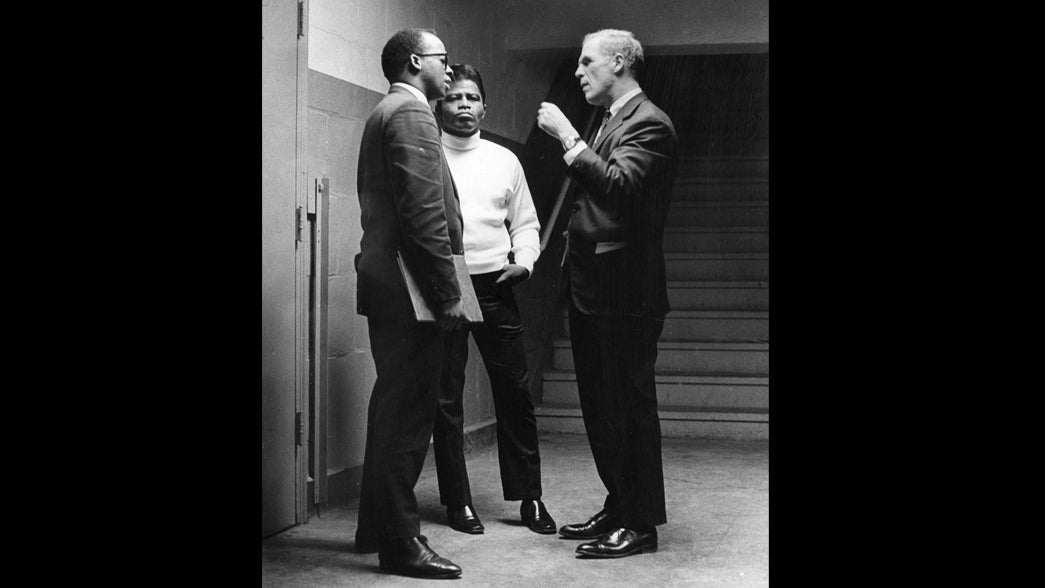 Boston City Councilor Thomas Atkins (left) and Mayor Kevin White (right), speak with James Brown at the Boston Garden on April 5, 1968. It was one day after the assassination of Dr. Martin Luther King Jr.

The night following Martin Luther King Jr.’s assassination was a tumultuous one in cities nationwide.

With Boston still in a saddened, confused, and angered state, it also happened to be the night of what’s largely recognized as the greatest concert in the city’s history.

James Brown was scheduled to perform at the Boston Garden on April 5, 1968. But following the assassination of Martin Luther King the day before, and with 14,000 patrons expected to attend, cancellation was considered.

“A crowd of that size, combined with the temper of the day, it was feared, might result in violence,’’ Donald Johnson wrote for The Boston Globe.

While Boston’s reaction to Martin Luther King’s assassination was largely non-violent, the city was still emotional over the leader’s loss, and police presence was high around the clock. 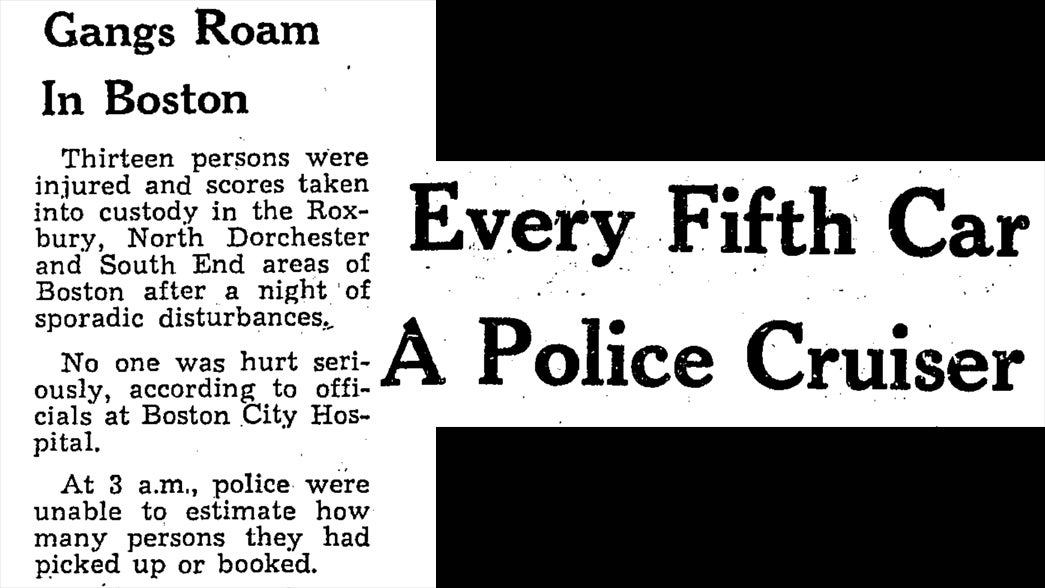 The show ultimately went on, as Brown agreed to perform, and Mayor Kevin White hoped it would temporarily quell some of the city’s unrest. Additionally, White broadcast the concert for free on WGBH, giving the city a chance to unite in spirit to mourn the loss of Dr. King.

The plan was largely successful, as Brown performed a 15-song set to an audience of about 2,000. At one point, a group of audience members crash the stage. As the police approach them, Brown asks them to stop so he can handle the situation himself. Patiently, Brown restores the room to order, saying, “I asked the police to step back because I figured I could get some respect from my own people. Now are we together or are we ain’t?’’

Mayor White spoke to the audience with the support of Brown, and by the night’s end, Boston had engaged in collective mourning, with James Brown as their spiritual guide.

Boston City Councilor Thomas Atkins, who attended the show, remarked, “I think the city of Boston owes James Brown a tremendous vote of thanks. He demonstrated last night how to talk to young people in a language they both understood and accepted. He got across powerful messages, without either talking down or pretending to be something he was not. The young people showed that when they are treated with respect and concern, they respond in kind.’’

In the decades that followed, James Brown’s concert on April 5, 1968 is seen as one of the most powerful cultural moments in the city’s history. The Boston Phoenix named it the greatest concert in Boston’s history and the show itself was released as a documentary called The Night James Brown Saved Boston in 2009. Just two days after the show, however, the Globe printed a review of the concert, capturing its immense weight in the moment: 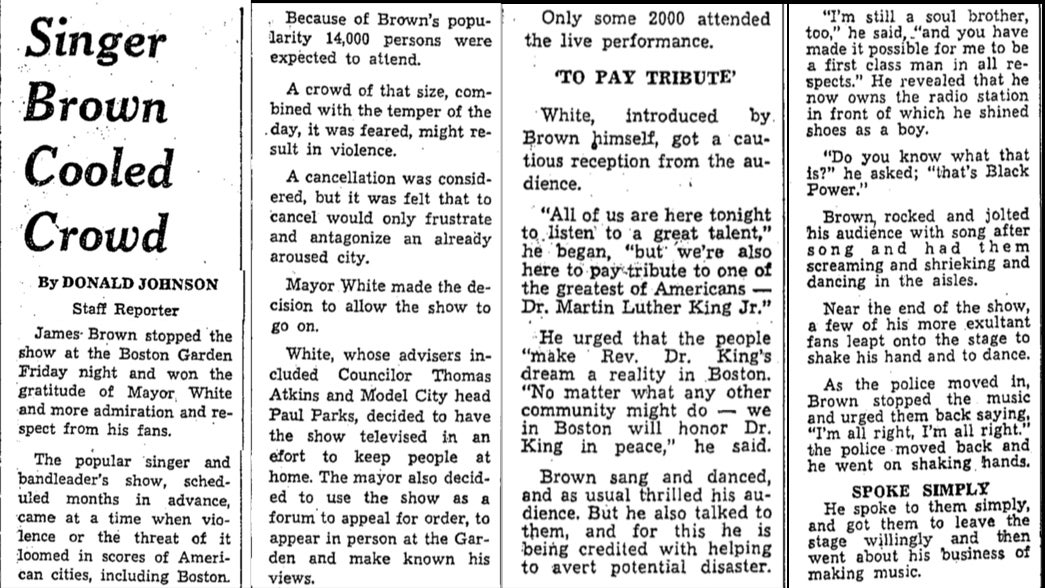 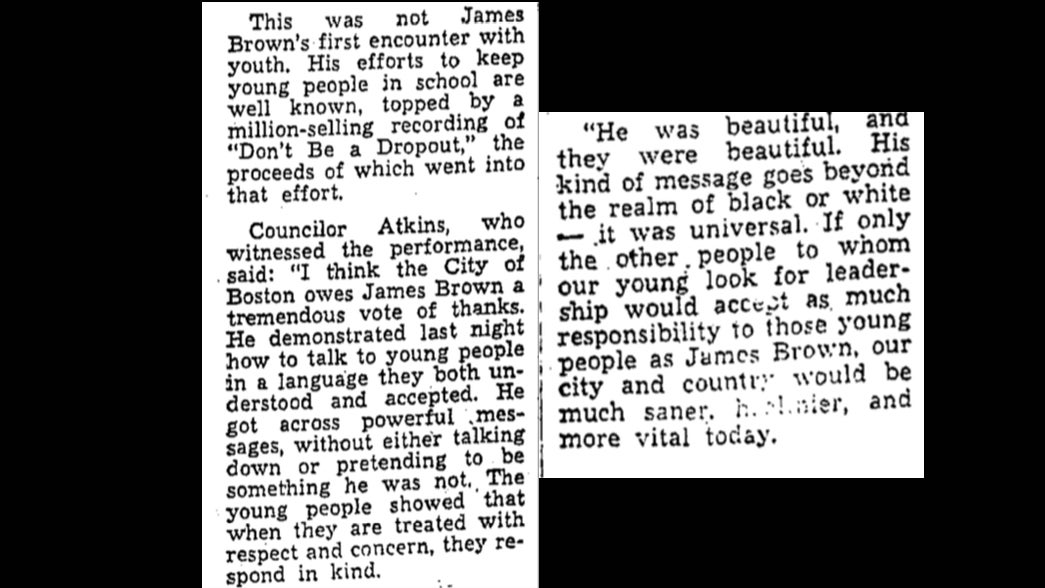 “All of us are here tonight to listen to a great talent,’’ White said. “But we’re also here to pay tribute to one of the greatest of Americans– Dr. Martin Luther King Jr.’’