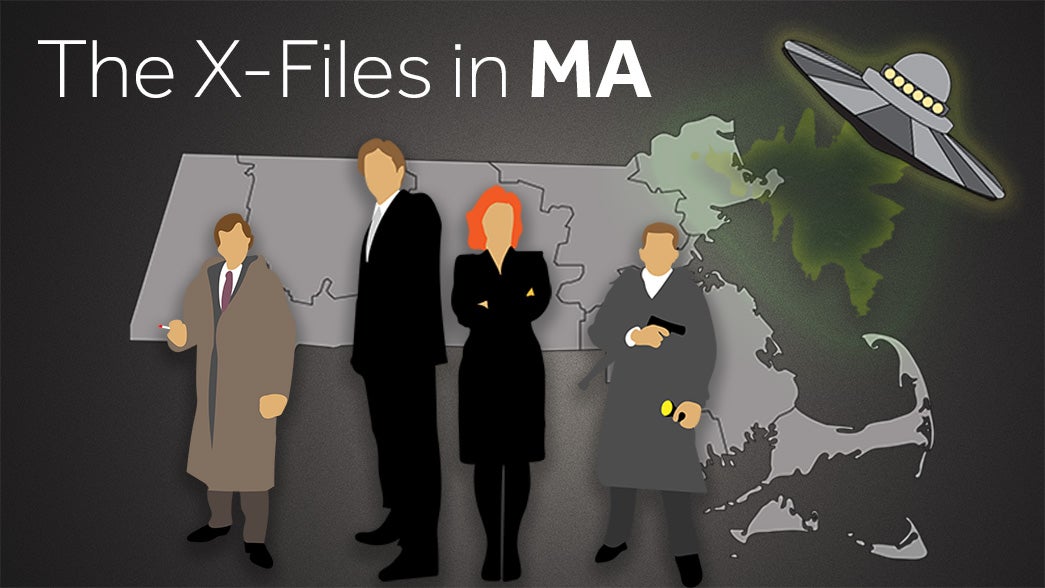 Nineties sci-fi cult favorite TV show The X-Files will resume as a miniseries premiering January 24 on Fox, 14 years after the original show was canceled in 2002. Throughout its original nine seasons, when they weren’t at their home base in Washington, D.C., agents Fox Mulder and Dana Scully spent a good amount of time in various parts of Massachusetts investigating. That included the continuing storyline of Mulder’s sister’s abduction, which took place in Mulder’s childhood home on Martha’s Vineyard.

As we look ahead to more episodes of The X-Files, here are 10 that took place right here in the Bay State: 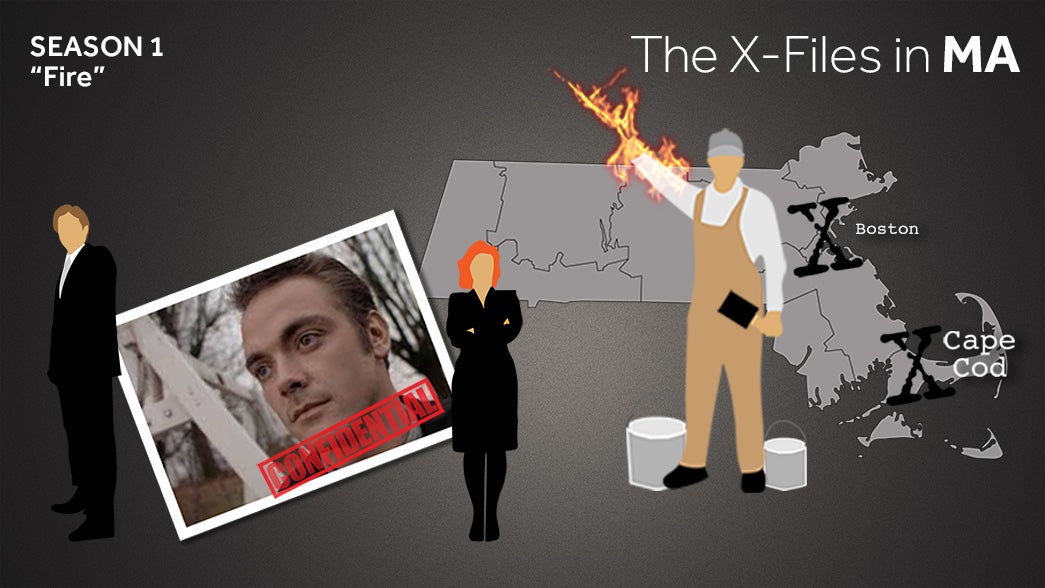 Scully and Mulder pay a visit to Cape Cod, where Sir Malcolm Marsden and his family are visiting for protection after escaping an attack from a serial arsonist, Cecil L’Ively, in England. Little does Marsden know that the arsonist is there to greet him on the Cape, posing as a caretaker for their estate. L’Ively proceeds to use his pyrokinesis abilities to set fire to a bar in Cape Cod, and after playing chauffeur and driving the Marsdens to a party in Boston, sets fire to their hotel room, as well. Mulder and Scully end up catching L’Ively back on Cape Cod, as he starts a fire in their house. Luckily, Mulder faces his fear of fire, rescues the Marsden children, and Scully helps take L’Ively down.

A murder during a sexual encounter between two nightclub partiers leads Scully and Mulder to the fictional town of Steveston, Massachusetts, where a cult known as the “Kindred’’ lives on a farm commune. The group initially shuns the two agents but eventually invites them in for dinner, and Scully immediately recognizes that they have supernatural powers as she becomes entranced simply by shaking a member’s hand. The agents eventually realize that the group has the capability to switch genders. Unfortunately, after another murder occurs, the Kindred escape their commune before Scully and Mulder can get there. The only thing Scully and Mulder find upon their arrival is a mysterious crop circle. 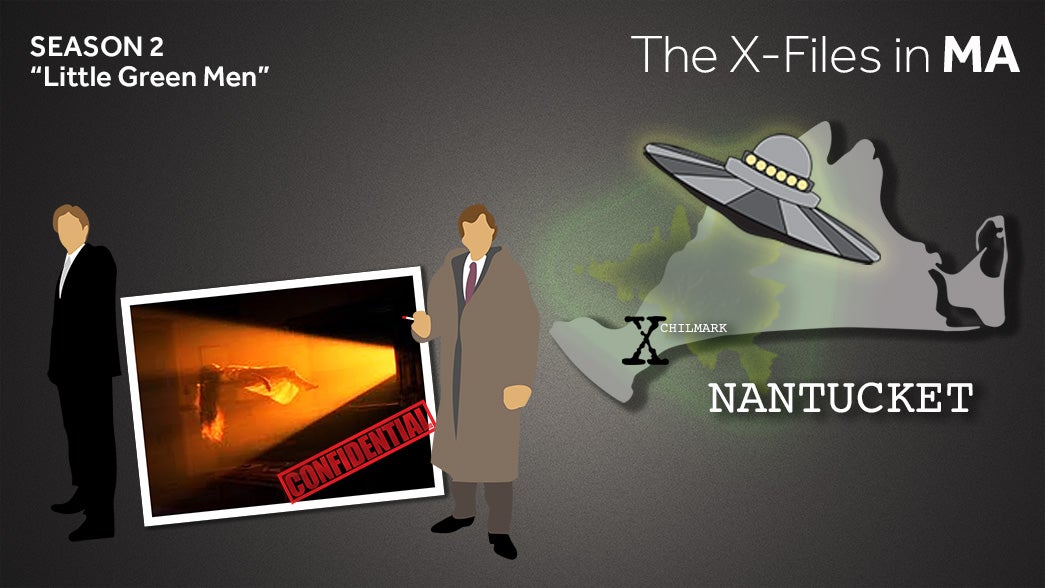 While this episode doesn’t take place in Massachusetts, Mulder has flashbacks to the night of his sister’s abduction. In his flashback, he is babysitting for his sister, Samantha, back at his childhood home in Chillmark on Martha’s Vineyard, playing her in a game of Stratego and arguing over which TV station to watch, when she is taken by aliens. This is a memory that plagues Mulder throughout the series.

Mulder and Scully make their way to Worcester, Massachusetts to look into a case of rape in the Excelsis Dei nursing home. A nurse believes she was raped by some invisible being, and upon investigating, Mulder and Scully find that one of the home’s orderlies is giving patients a drug that he is concocting out of mushrooms. While this medicine relieves their Alzheimer’s, it makes patients have visions of those who have died in the nursing home, many of whom hold a resentment against the members of the home’s staff who treated them poorly. When the nurse is attacked again, Scully must help subside the visions of one particular patient in order to ward off the spirits and save the nurse’s life. 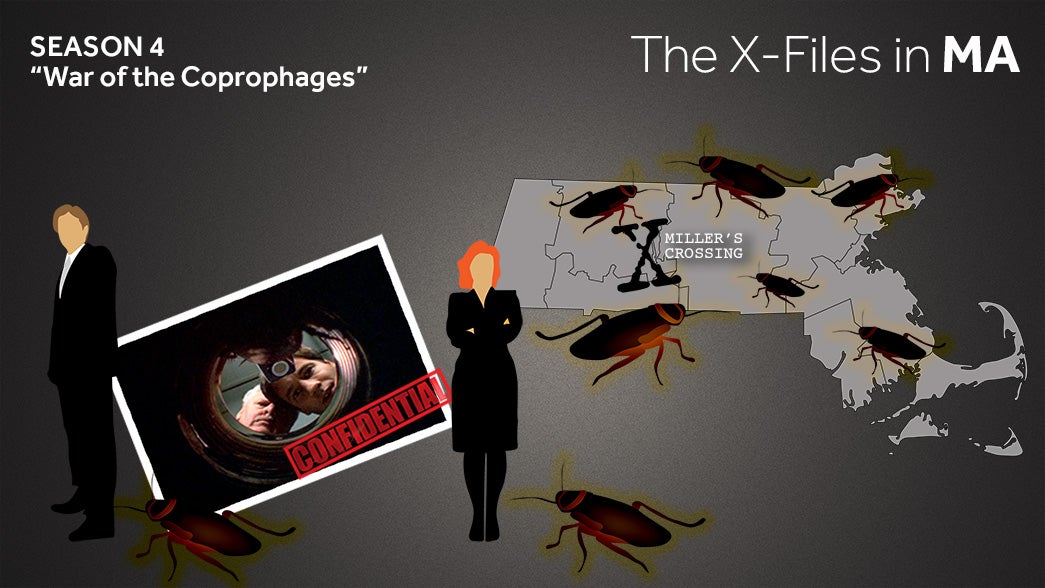 Not an episode for the squeamish. Mulder is in the fictional Miller’s Grove, Massachusetts when he hears of a series of cockroach-related deaths. Before long, the entire town is paranoid over the roach infestation, with Mulder and some of the area’s researchers even believing that the roaches were extraterrestrial mechanical devices. In a fit of paranoia, a local doctor pulls a gun on Mulder, believing that Mulder may even be a cockroach. Firing the gun, the doctor hits a methane gas pipe. The facility that they’re in explodes and claims the life of the the doctor.

Widely regarded as one of the worst episodes in X-Files history, this case leads Mulder and Scully to a history museum in Boston to investigate the disappearance of archeologist Dr. Decker shortly after an archaeologist in Ecuador was also killed. The investigators meet with the museum’s curator, but after closing, the curator is mauled and killed by a jaguar spirit. After a strange search, in which rats emanate from museum toilets and Mulder and Scully are attacked by a pack of feral cats, they determine that these animal attacks are due to a burial urn being removed from the archaeological site in Ecuador. 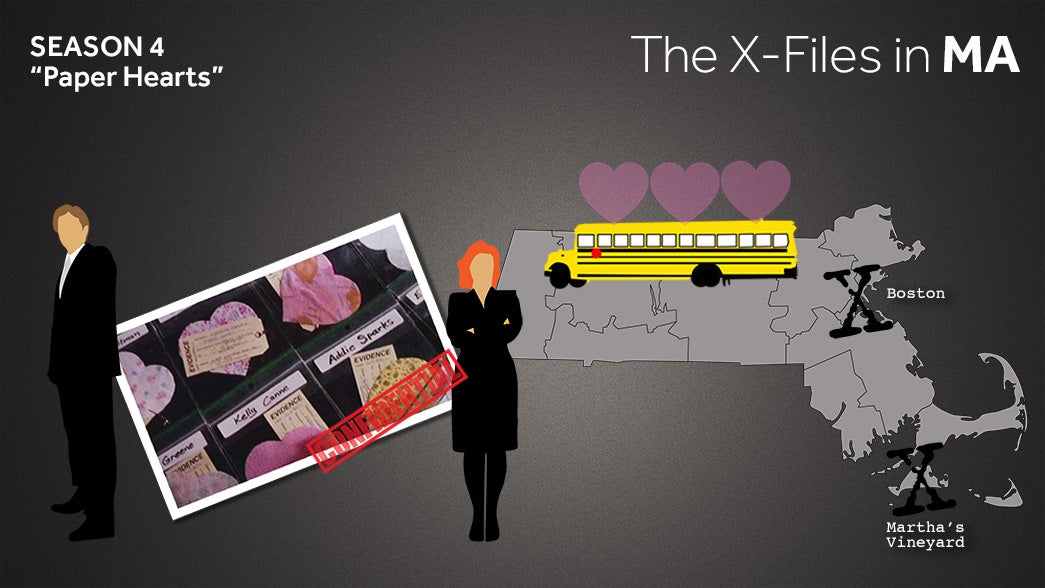 A pivotal episode to the overlying story arc, Mulder once again investigates the disappearance of his sister, Samantha, this time believing it may have been the work of John Lee Roche, who went on a killing spree of young girls throughout the 1980s. Mulder visits Roche in prison, who tells Mulder that he had sold a vacuum to Mulder’s father on Martha’s Vineyard. Hoping to find out more information, Mulder secretly releases Roche from prison and brings him to Martha’s Vineyard. When Roche’s story doesn’t seem to line up, Mulder plans to take him back to prison, but awakens to find that Roche escaped with his badge and gun. Mulder finds Roche in Swampscott, Massachusetts, and he’s kidnapped another girl. Mulder has no choice but to shoot Roche, never knowing if it was Roche who indeed killed Samantha.

A mysterious old man stops two MIT cryogenicists on the street to tell one of them that he will get run over by a bus that night. When his prediction comes true, Mulder and Scully look into the case. The situation only gets stranger when the old man kills a Japanese researcher by injecting him with an unknown freezing agent which has the adverse effect, setting the man aflame. The old man is found living in a hotel room, and a photograph of the man who died in the bus accident leads Mulder to believe that the old man is actually a time traveler who is the older version of the other cryogenicist who didn’t die in the bus accident. In the end, the old man and younger version of himself meet again, at which point the old man embraces him and bursts into flames. 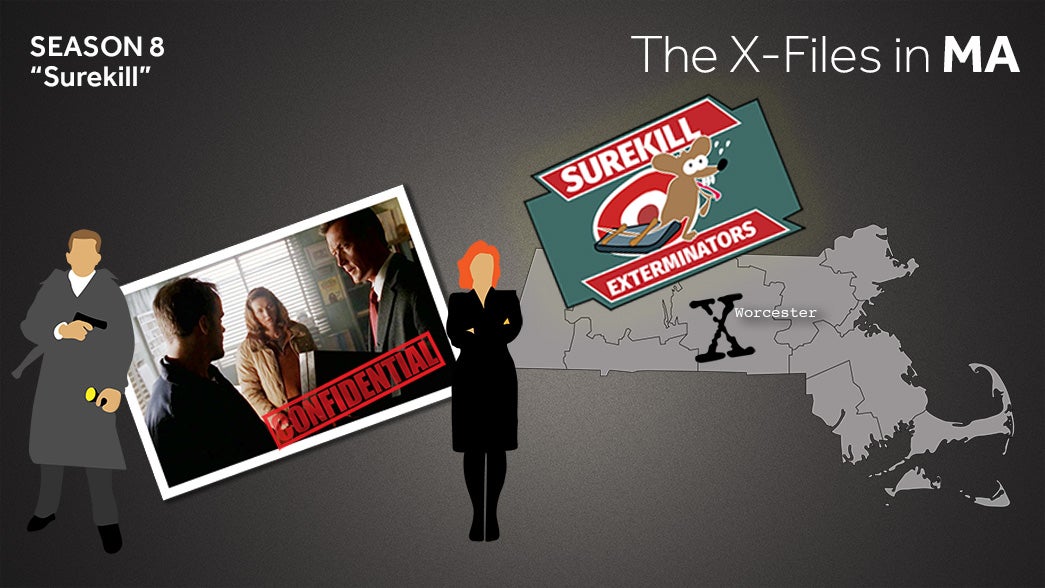 Worcester is the scene of a suspicious murder in which a man is shot through police station walls just after leaving a frantic message on someone’s answering machine. Scully and Mulder’s replacement, John Doggett, investigate and determine that the killer has the ability to see through walls. In a confusing love triangle of a plot, two exterminators face off, along with the woman who received the phone message from the man who was killed. Another man dies in the process, but the woman escapes, and the original killer is caught.

When a cop is found on a Boston subway car with half of his body rotted away, Scully and Doggett look into the peculiar case, believing that there is a gruesome killer. What they find instead is that there is some sort of contagion affecting the subway tunnels. Upon further research, they determine that water samples from inside the tunnels contain tiny creatures called medusas, which cause infected people to have a green glow. Doggett ends up using the electrical charge of the third rail to kill the medusas and restore order to the Boston subway system. 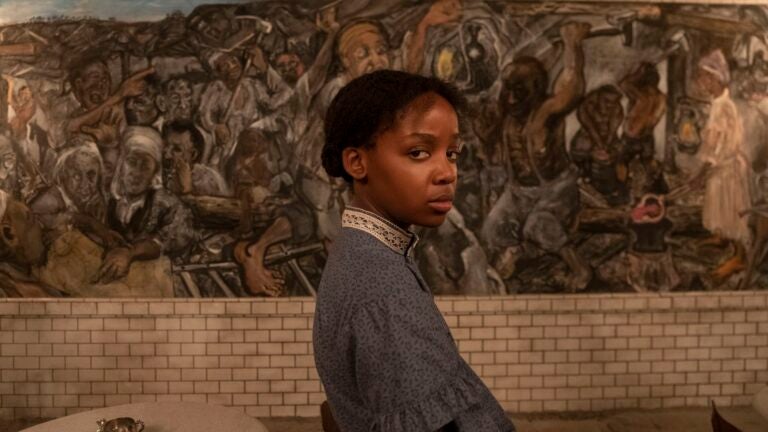