A line of hundreds stretched around the block outside the Columbus Theatre in Providence Thursday night, as fans eagerly awaited the worldwide premiere of Spring Break Zombie Massacre and the arrival of its two stars. A police car cruised by, siren blaring, followed by a tricked-out white SUV blaring music and covered in fake blood and zombie corpses. The crowd around the red carpet parted as Sam Suchmann and Mattie Zufelt, better known as Sam and Mattie, stepped out of the truck to wild cheers.

“Superstars!” someone in the crowd yelled, as the duo posed for pictures. “Paparazzi!”

Five years in the making, Sam and Mattie’s dream was now a reality.

Sam, 20 and Mattie, 21, have been best friends since meeting at the Special Olympics in elementary school. As Sam’s older brother Jesse Suchmann tells it, where one goes, the other isn’t far behind.

Back in 2011, when Jesse was visiting his Rhode Island family home on a weekend away from his current residence in New York City, Sam told him he had an idea for a movie about zombies. And he was going to be the star. While Jesse said he encouraged Sam right away, he hadn’t counted on Sam being so persistent. Each time Jesse came home, Sam asked him about filming scenes for the movie. Eventually, the two of them sat down with some construction paper and worked on storyboards. Soon, they had a full-fledged movie about two bionically-enhanced heroes named Sam and Mattie who fight zombies, demons, and zombie-demons, all while juggling beautiful girlfriends and finding time to skateboard, stop bullies, and party.

“Sam had a vision,” Jesse said. “And there was no way we could make the movie his way if we shot it on phones in our backyard.” 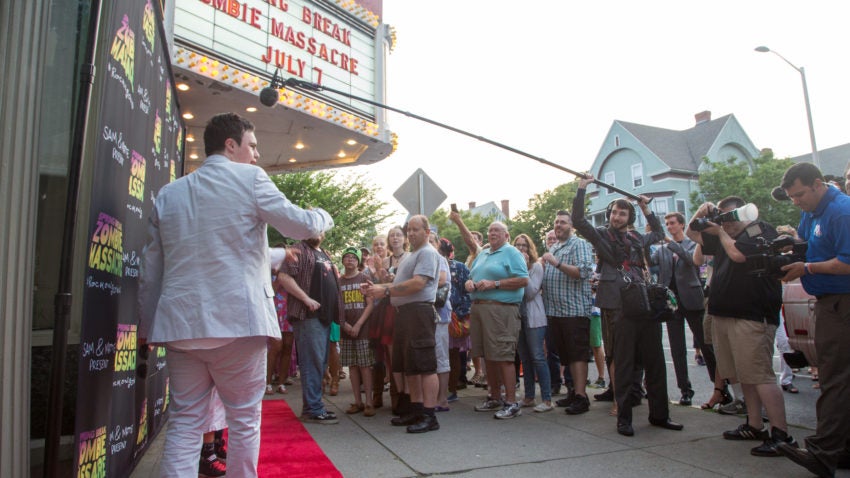 Sam Suchmann addresses the crowd at the Columbus Theatre in Providence.

In October 2014, Jesse started a Kickstarter campaign, filming a goofy video of Sam and Mattie introducing themselves and sharing their vision. After Kickstarter featured the campaign on their site on Halloween and a few media outlets took notice, the project took off, raising almost $70,000 in a little over a month.

Before launching the Kickstarter campaign, Jesse had begun to solidify a team of friends to help make the movie a reality, including the film’s director, his high school friend Bobby Carnevale.

“Jesse and I were both bogged down by the corporate world, and wanted to pursue a passion project that meant something,” Carnevale said. “I’ve worked in film for years, but the energy Sam and Mattie had, it was something I’d never dealt with before. Anytime we had doubts, they showed up and went in full force.”

Jesse and Bobby, along with editor Tim Forster and producer Suzy Beck, were the core four supporting Sam and Mattie’s movie. According to Carnevale, they each had to call in dozens of personal favors and reach out to lots of different people to make the film happen.

Among the bigger gets were a set of cameras donated by Panavision and assistance from the special effects company Silver Scream FX Lab, which has worked on shows like The Walking Dead. Though there are still a few special effects that are a bit more DIY (or “Michel Gondry-esque,” as Carnevale calls them), the zombies, demons, and zombie-demons that populate the movie wouldn’t be out of place in a major Hollywood picture. 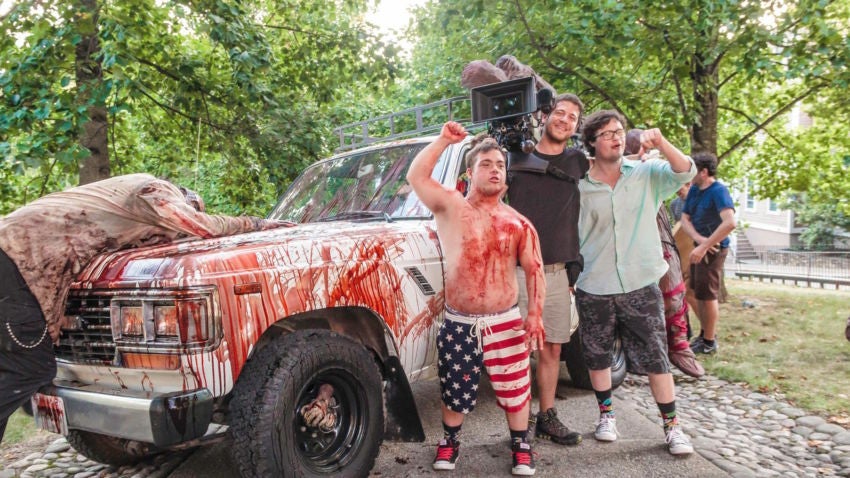 Sam and Mattie on set with the car they rode to the premiere.

Special effects and fancy cameras aside, though, the film — and the filmmaking process — wouldn’t exist without Sam and Mattie. They are in every scene and were involved in every step of the process, including casting.

“Lots of times, people might say, ‘Oh, wow, these professional people helped these kids with Down syndrome who had a dream!’” Jesse said. “It’s not like that. Sam and Mattie are in charge. They’re the ones leading the vision and writing the script, hanging on set — they’re way more than a couple kids with an idea.”

If you know a bit about Sam and Mattie, you can see how much of themselves they put into Spring Break Zombie Massacre. On days when their energy wasn’t quite as high, Sam said, they “drank a lot of root beer and kept going.” In the film, the traditional spring break scenes are filled with chugging, shots, and funnels of soda. In real life, the team scrambled to finish filming before Mattie entered his college transition program, ultimately wrapping with two days to spare. In the movie, the duo goes from being the kings of their high school to big men on a college campus.

Perhaps most tellingly, Mattie hopes to one day become a famous DJ (with Sam as his manager), and counts Rhode Island native Pauly D as one of his heroes. In every Kickstarter update and media appearance they made, Sam and Mattie mentioned that they wanted Pauly D to be in their movie. And in a climactic battle scene, the Jersey Shore star and DJ makes a cameo.

“Pauly D was awesome,” Sam said. “He’s a real inspiration to Mattie. He was a really nice guy with a great attitude and heart.”

“They know that fighting for what they want and believing in their vision will make things work,” Jesse said. “It’s been a real lesson for me. They have a vision, and they follow it. They dream huge — bigger than big.” 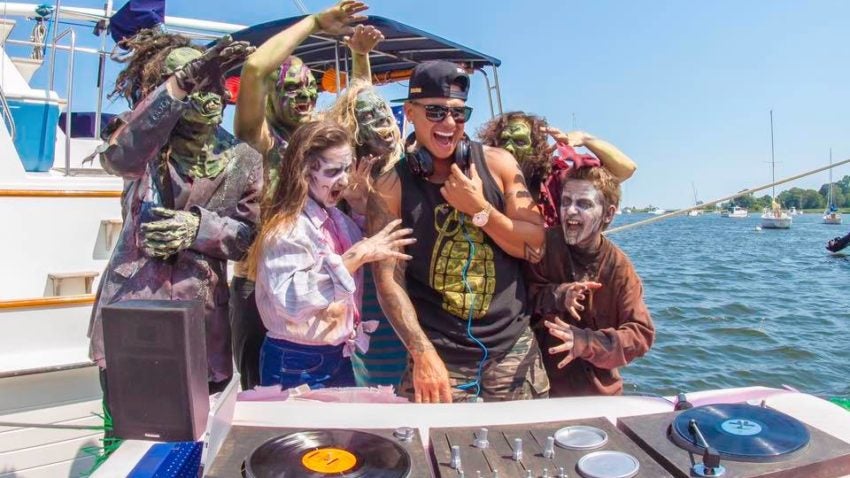 Pauly D on the set of ‘Spring Break Zombie Massacre.’

Thursday night’s world premiere isn’t the end of the road for Sam and Mattie, however. Throughout the entire process, the core four have been shooting a documentary showing every step of how Sam and Mattie’s movie came to be. A film crew was still shooting as the boys walked the red carpet outside the Columbus. Though Carnevale once said he envisioned Thursday’s premiere as the perfect end to the documentary, Jesse says that Spring Break Zombie Massacre has been accepted to multiple film festivals, and they hope to hold screenings of the movie in other cities (including Boston), so they’re going to keep going.

“We’ll bring the cameras to all the festivals, whether it’s Austin, Mexico City, [or] Telluride,” Jesse said. “We’d be foolish to stop filming before the journey is over.”

As Spring Break Zombie Massacre concluded Thursday night, the crowd stood and cheered in unison, only sitting once Sam and Mattie took the stage for a Q&A. When asked if the film was everything they imagined, Mattie was blunt.

When asked what lessons they wanted to share from their experience, Sam’s message was simple.

“We made this for people with Down syndrome,” he added. “Because we’re people, too.” 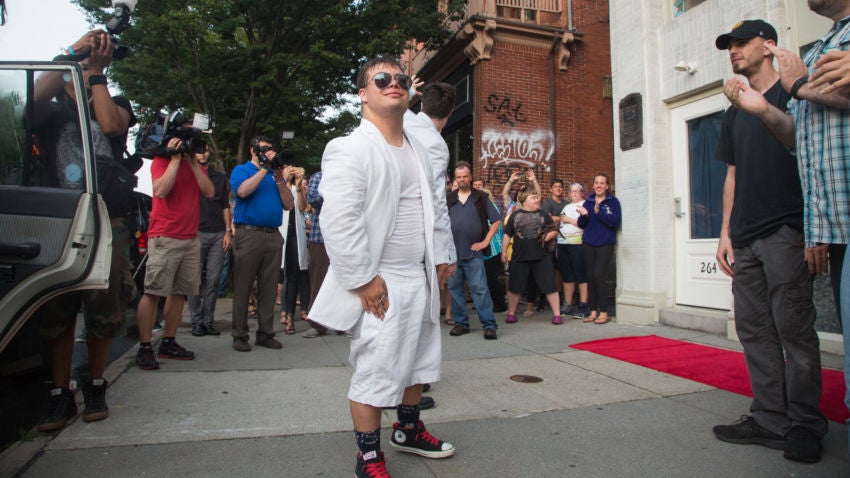 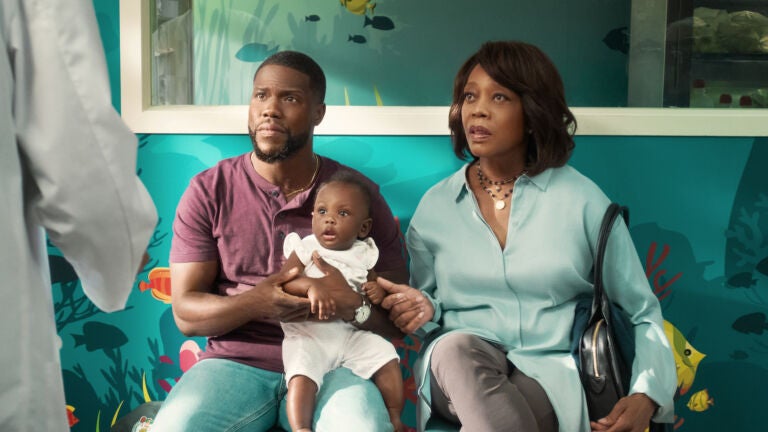 All the movies and TV shows on Netflix, Hulu, Disney+, and Amazon Prime this month