Does it seem like way more people than usual are staring into their phones? Have you seen roving packs of teenagers holding their cells up outside seemingly innocuous landmarks like a church or fire station? You’re witnessing the Pokemon Go effect, and it’s taking the nation — and the Boston area — by storm.

Update: Every single person in the Boston Common is playing #PokemonGO right now.

Pokemon Go is a new mobile game that uses augmented reality to let players catch Pokemon — the wildly popular cartoon creatures that first appeared in video games, TV shows, and movies during the late ‘90s — in real-life locations. The app generates Pikachus, Charmanders, and Squirtles for players to catch as they walk around their neighborhood, with landmarks like churches, academic buildings, and police stations serving as meeting points known in the game as gyms where players can do battle.

The game’s popularity isn’t just anecdotal. It launched July 6, and it’s currently the most popular free app and the top grossing app in Apple’s App Store. According to a survey of Android users by SimilarWeb, Pokemon Go has been downloaded twice as many times as popular dating app Tinder, and will soon have more daily active users than Twitter. Boston in particular seems to have caught the Pokemon bug — as noted by The Boston Globe, Boston is second in a city-by-city ranking of Google searches for the term “Pokemon Go” behind only Detroit.

Whether they’re playing on the T…

Or just having fun outside…

I ain’t wanna catch him cuz I already got one so we just took pics with him lol pic.twitter.com/07KROOlEWY

Literally everyone on the street in Allston is playing Pokemon Go

The game isn’t just for the younger set, though. It’s bringing people of all ages together.

Some people are even learning things while playing.

I’m really learning a lot about the local Allston graffiti scene through #PokemonGO.

just found out that there’s a Somerville museum thanks to Pokemon go. this shit is enriching my life.

It’s not just about catching Pokemon for yourself, either. According to a Reddit post, people have continued to set lures (an in-game item available for purchase that draws Pokemon to a certain spot) at both Brigham and Women’s and Boston Children’s Hospital.

“It’s just nice to see that the lures keep getting placed so the kids in the hospital can still play the game, Reddit user Wickedcoddah wrote. “Kids that can’t go outside still have a chance.”

In a less endearing (but still amusing) use of the game, someone reported a Pokemon sighting to the Boston 311 mobile app, usually reserved for potholes or parking violations.

It’s @BOS311 and me. I know it’s our destiny… pic.twitter.com/ebdFkGmCtu

If you’re going to play, just remember to heed the game’s frequent warning: Be alert at all times.

We remember Justin, a grown-ass man who walked in front of a dump truck in downtown Boston playing Pokemon Go, which totally rules

If you are going to be playing #PokemonGO please do so safely!! Just saw someone almost get hit by car while playing .

#PokémonGo in Boston, so I’m supposed to go behind this building just cause of the PokéStop with a lure module… pic.twitter.com/z1dOFFgCbG 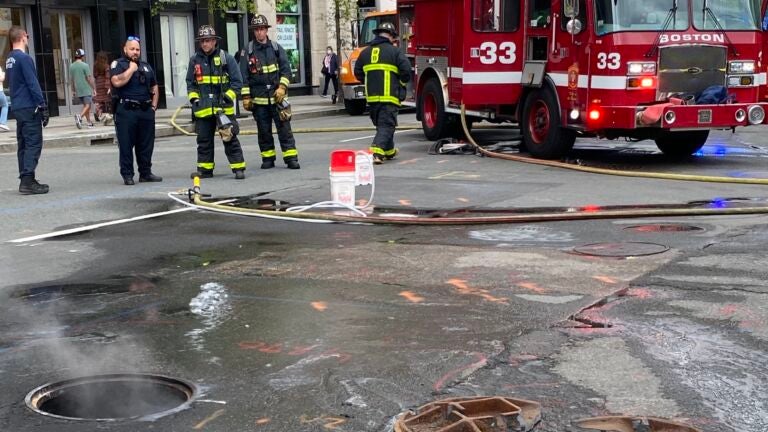 2 manholes explode on Boylston Street in Boston near Prudential Center