At the start of “The Town,” Sunday’s episode of The Simpsons devoted entirely to Boston, Homer and the usual gang at Moe’s Bar are distraught when the Springfield Atoms lose in agonizing fashion to the Boston Americans, a stand-in for the New England Patriots. The defeat is made worse by a loud, obnoxious group of Boston fans, in town for a Dennis Lehane book tour.

“The Town” may begin with a lot of animosity toward Boston—with TV’s most famous animated family heading to the Hub for a “hate-cation”—but the episode was clearly made by people who love the city. Executive Producer Matt Selman is originally from Watertown, writer Dave King grew up in Needham, and the episode is full of guest stars with local ties, including Bill Burr (Canton), Michael Chiklis (Lowell), Rachel Dratch (Lexington), Doris Kearns Goodwin (Harvard), Dana Gould (Hopedale), Mike Mitchell (Quincy), and Jason Nash (Boston).

“I just want the hometown crowd to love it,” Selman said. “Or at least I want them to not think some goofy kid from Watertown f***ed it up.”

“The rest of the country can suck it,” he added.

Sure enough, shortly after the Simpsons arrive in Boston, they realize how wrong they were about the city.

The episode is full of broad, obvious jokes about Boston that anyone in America will understand — MIT has nerds, the locals have weird accents, and the football team has a stern-faced hoodie-wearing head coach, a pretty boy quarterback, and a giant lovable idiot named Dom Bonkowski. But it’s the little details hiding in each frame of “The Town” that people who have lived here all their lives will appreciate the most. 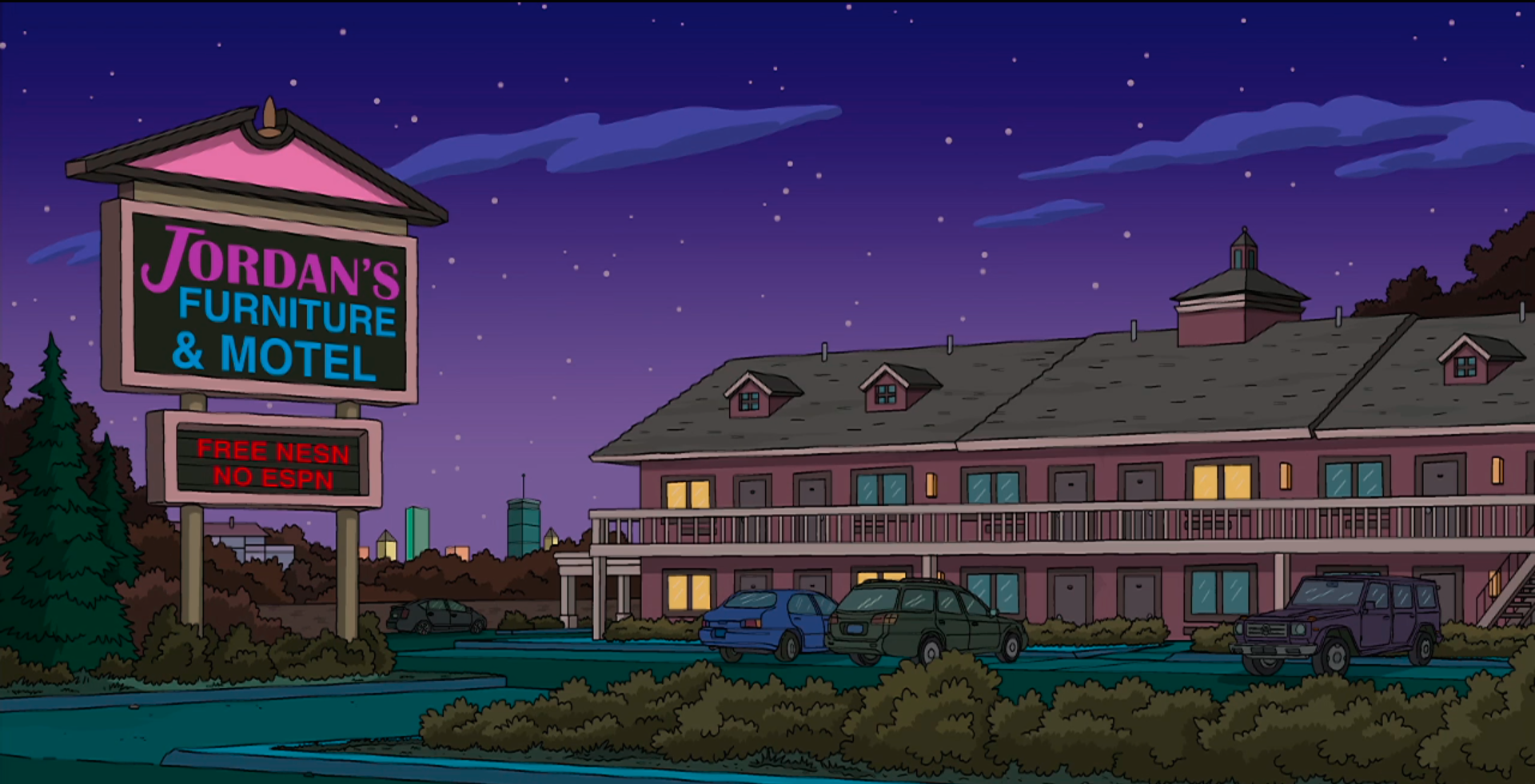 Selman and the team of writers went overboard filling the background of every second of “The Town” with nods that only locals will get.

And Selman said he could have filled another two or three episodes with the mentions left on the cutting room floor, including ones to longtime WBZ newscaster Bob Lobel, the Alewife T station, and the many iconic roast beef spots on the North Shore.

“I spent as much money as I possibly could without getting in serious trouble,” Selman said. “I stuffed every single poster, every single part of every scene full of references.”

Here are all of the best hidden references we could find from Sunday’s episode of The Simpsons, as well as some of the funniest quotes from the episode.

(NOTE: If you haven’t seen the episode yet and don’t want to spoil it, Fox typically makes episodes available on the network’s website the day after they air with a valid cable subscription.) 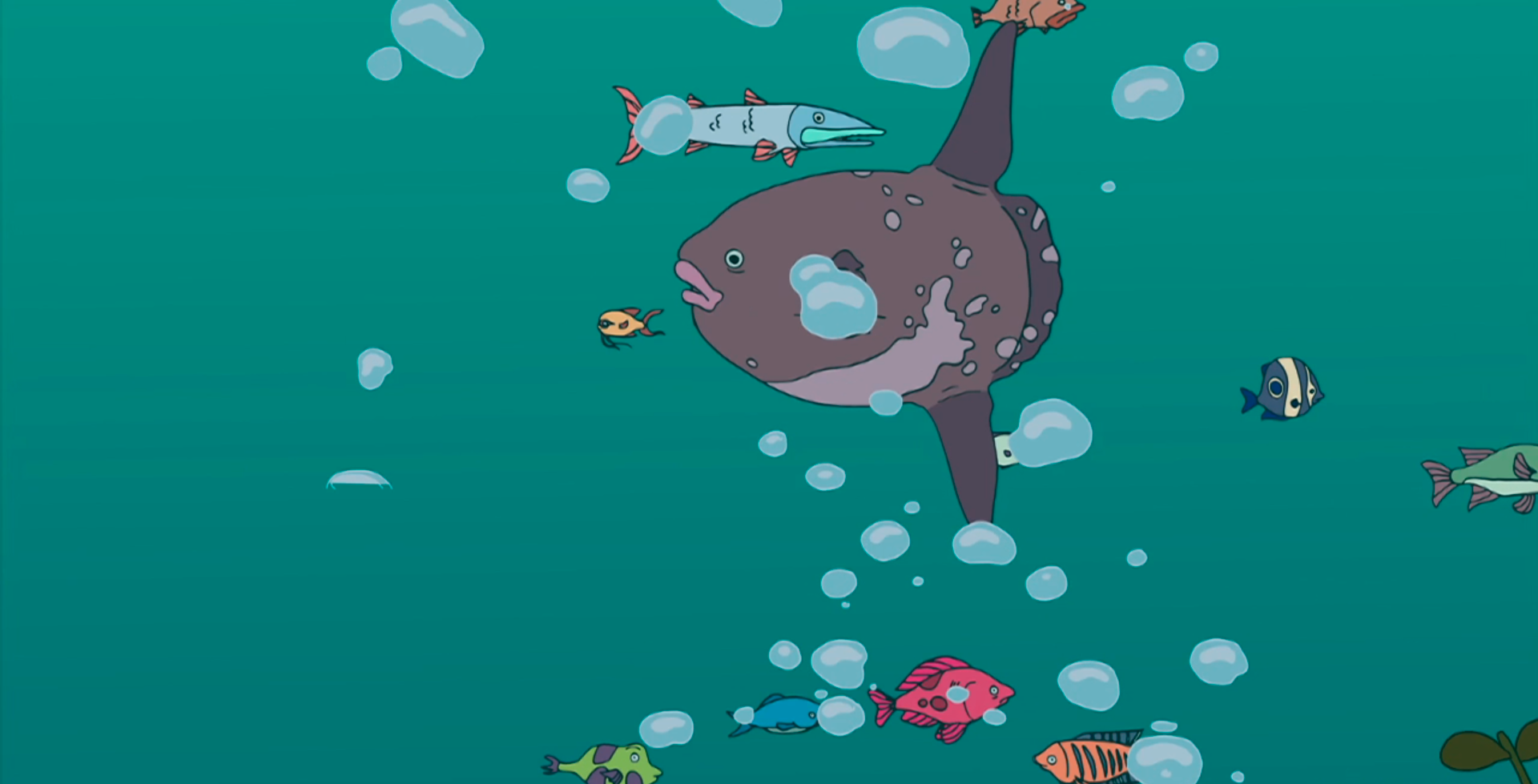 1. To get to Boston, the family flies “Southie-West Airlines.”

2. As the camera moves from an aerial shot of the city down through the Harbor and into the tunnel to reveal the family stuck in traffic, you briefly see boxes of British tea and a sunfish, aka a baby whale, Jay!

3. Throughout the entire episode, you can spot stickers closely approximating the Newbury Comics logo.

4. Stuck in traffic, an angry local throws a “Duncan’s Doughnuts” iced coffee at the family.

5. As something close to the Cheers theme music plays, the family arrives at Quincy Market, where every shop is a local joke of sorts, both obvious and obscure. There’s:

— Lawful Seafood Restaurant, with the tagline, “If it isn’t fresh, it isn’t lawful.”

— Spenser: for Hire’s Gifts (a play on Spencer’s Gifts and Spenser: For Hire, a detective show set in Boston that aired on ABC in the ’80s) 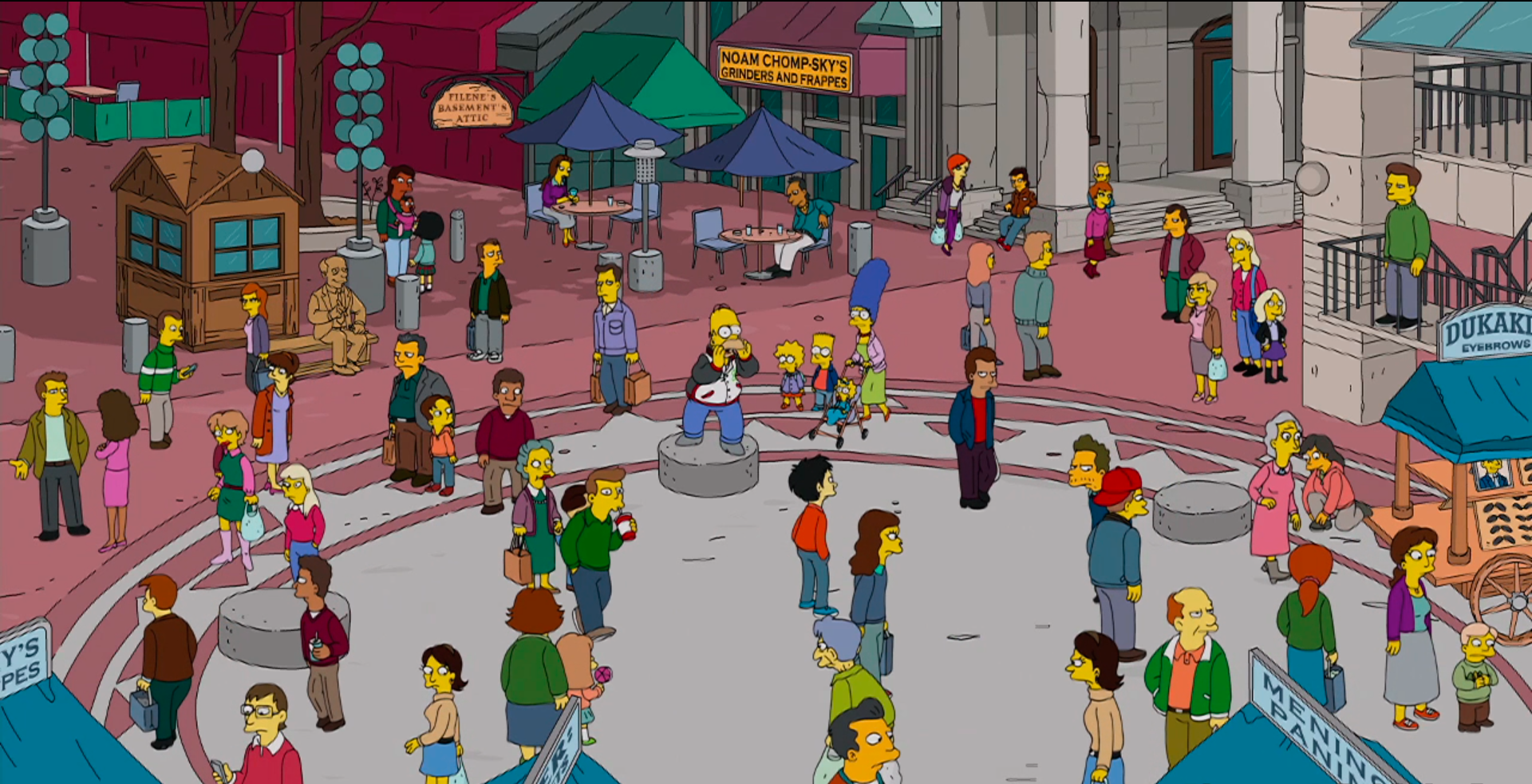 Homer yelling about how Fenway Park is overrated.

6. After acting like a jerk, Homer is crushed by a bobblehead cart, and is surrounded by nodding doll versions of comedian Steven Wright (Cambridge), musician Aimee Mann (Berklee), and a three-headed Bell Biv Bevoe (Boston). A doctor (Rachel Dratch) removes the head of a Pedro Martinez bobblehead from Homer’s airway.

7. Homer suggests the family visit “Quimby, MA,” the home of fictional Springfield Mayor Quimby (a parody of Ted Kennedy and other Kennedys who held office).

8. The family stays at the Jordan’s Furniture and Motel. The sign outside reads, “Free NESN. No ESPN.”

9. The hotel room has a print of Watson and the Shark (a famous painting at the Museum of Fine Arts) and The Movie Loft, a popular local program that ran on Channel 38 (WSBK) in the 1980s and featured host Dana Hersey, who used his deep knowledge of film to introduce movies that would air unedited for the audience.

10. In quick succession, the show flashes a mix of real and fictional Boston locations both past and current, including:

— Lechmere (not the T stop, the defunct retail store) 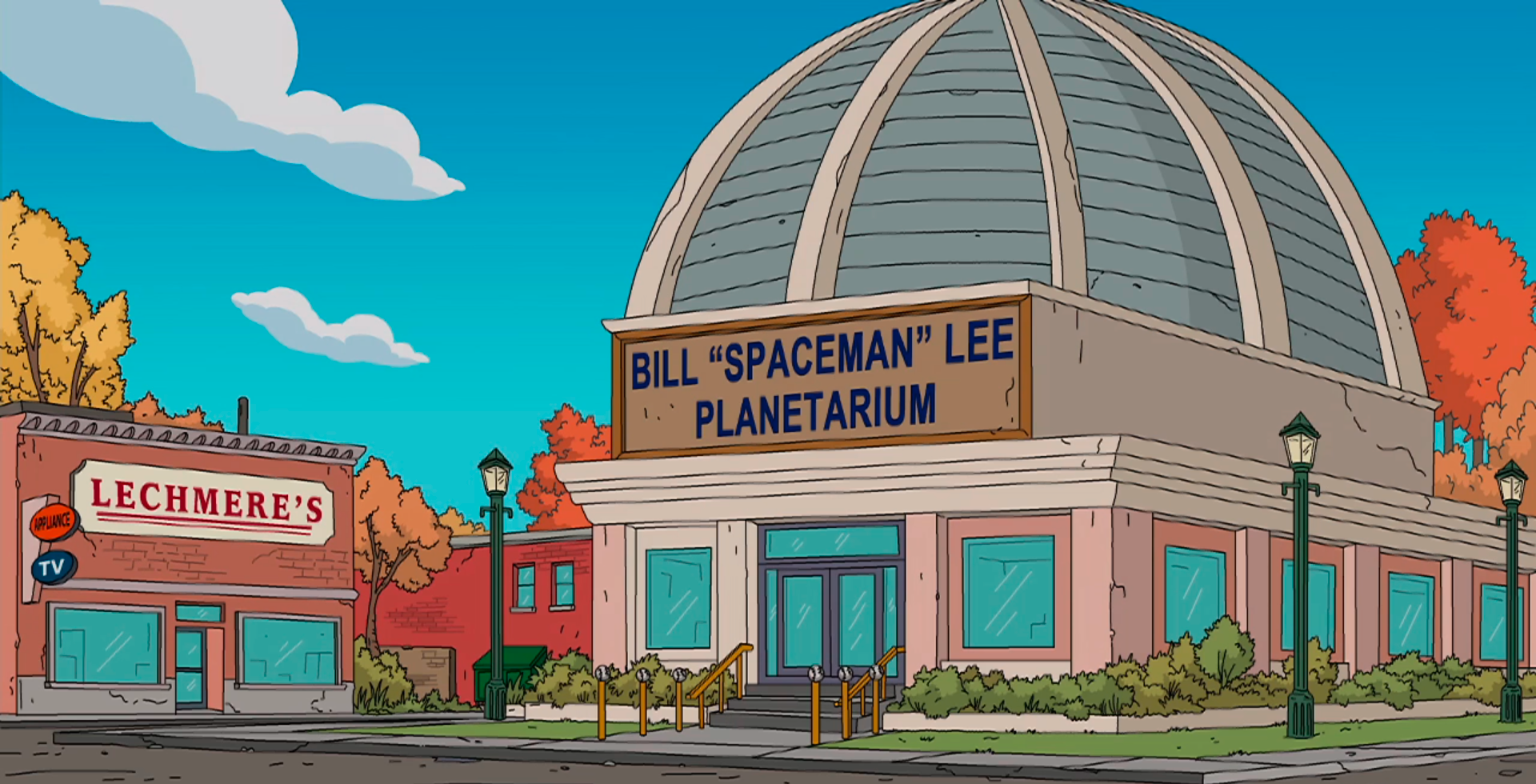 Lechmere’s and the Bill “Spaceman” Lee Planetarium in The Simpsons.

12. Homer begins to like Boston when the owner of Bulger’s Bowl-O-Rama, Whitey Bulger, tells him you get three balls in candlepin bowling. This leads to a bowling montage reminiscent of The Big Lebowski, in which Homer rolls at:

13. Homer gets a job as a safety inspector at NEKCO, the New England Candy Company.

14. Bart and Lisa start school, and Lisa’s teacher is Doris Kearns Goodwin. On the wall there’s a mnemonic device for Yastrzemski and a poster for Kearns Goodwin’s book, The Fitzgeralds and the Kennedys: An American Saga.

15. Bart’s classroom has a giant map of Cape Cod, the MBTA, and a “Cheers-iotic table of elements,” with elements corresponding to references from the show. (Sm = Sam Malone, for example.) The Cheers-iotic table, with Sm for Sam Malone and N! for Norm.

16. The school wall has a lunch menu featuring Fenway Franks, a TD Garden Salad, and a Gillette-o-Fish, as well as a “Reading is Fundamental” poster with Ted, the foul-mouthed bear voiced by Seth MacFarlane, browsing a book on the toilet.

17. When Bart acts out in class, he isn’t punished. Rather, he’s sent to be with other “high-energy” kids, who have formed an a capella group and are singing “Shipping Up to Boston.”

20. In the episode’s climactic scene, Bart takes the family to a Boston Americans victory parade in the Back Bay. Besides the unnamed pretty-boy QB, the dim-witted “Bonkowski,” and grim coach Bonderchuck, the crowd at the parade is basically like the album cover of Sgt. Pepper’s Lonely Hearts Club Band, but full of Bostonians. The attendees include:

— The cast of Cheers

— New Kids on the Block

— The ghost of Paul Revere

— The ducklings from Make Way for Ducklings

— Conan O’Brien, a longtime writer for The Simpsons A small portion of the crowd at the Boston Americans parade.

And here are 10 hilarious quotes from the episode:

The TV announcer, doing play-by-play for the Boston Americans: “The QB handsomely takes the snap, sexily steps back to pass, and with god-given good looks, fires it downfield!”

Bart, on the city’s history: “It all goes back to the Boston Tea Party, a prank so kickass it started a country!”

The irate driver, after throwing a Duncan’s Doughnuts iced coffee at the family: “Move your gahhbage cahh! I gotta get to the packie ‘fore the Bs drop puck!”

Bart, when Homer admits he likes Boston: “Dad, you and me are real father-son Southies now! Just like Ben and Casey Affleck!”

Marge, after the family moves into a Back Bay townhouse: “Can we really afford to live in a city with a symphony AND the Pops?”

Bart, on choosing a career path: “Are you sure we have to go to school here? I sort of thought I’d go straight to running numbers for the Irish mob.”

Lisa, wowed by MIT: “It’s like heaven for people who don’t believe in heaven.”

Bart, disappointed in how nice Boston is: “This place is all PC brainiacs and Subaru owners wearing fleece vests! It’s nothing at all like The Departed!”

Bart, explaining why the whole city is at a Boston Americans parade: “It’s a state holiday because the league overturned the coach’s suspension for using magnets to affect the coin toss.”

Marge, sadly returning to Springfield: “I never even got to experience one of those Boston winters everyone raves about!” 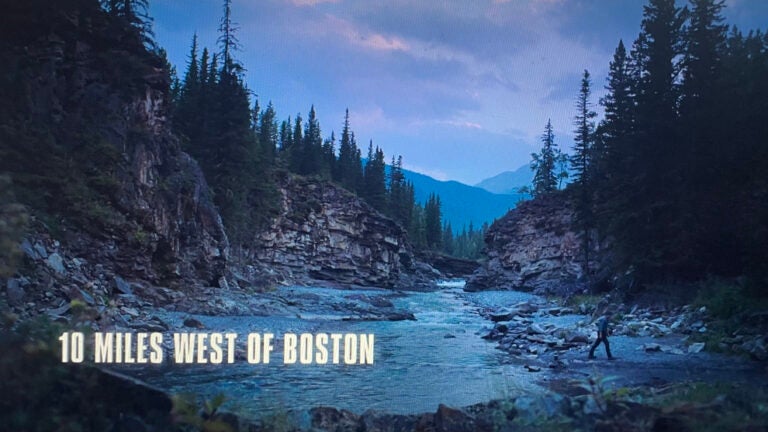 'The Last of Us' makes a mockery of Boston-area geography