It’s been more than a year since Manchester by the Sea debuted to rave reviews at the Sundance Film Festival. Since that time, the film — starring Casey Affleck as a down-on-his-luck handyman in Quincy forced to take guardianship of his nephew (Lucas Hedges) — enjoyed a healthy theatrical run, earned numerous awards, and received near-universal critical acclaim.

Though the film earned six Oscar nominations, it’s unclear whether it will win any of them, with many Oscars prognosticators predicting lots of victories for awards juggernaut La La Land. Even Affleck, who won a Golden Globe for his performance, faces serious competition in the Best Actor category from Denzel Washington in Fences (who won the SAG Award for Male Actor in a Leading Role).

To fully prepare yourself for Sunday’s ceremony, here are some of the articles published on Boston.com about Manchester by the Sea over the last year.

Neither the first nor the second trailer for Manchester offer a good indication of how dark and depressing the film really is, instead relying on the lighter, more broadly appealing moments to promote the film to a wider audience.

Manchester writer-director Kenneth Lonergan faced an uphill battle to get the film made after a series of lawsuits derailed his previous film for six years. But through a close relationship with Affleck, and thanks to Damon keeping the studio happy as a producer, the film turned out beautifully.

While Lonergan told Boston.com that Affleck went above and beyond to nail every detail of his character, the duo had a disagreement on whether Affleck should deploy a Boston accent for the film. Spoiler alert: Affleck lost.

Casey Affleck opens up about his acting philosophy in Manchester by the Sea, and more

While Affleck showed off his funny side in several late-night interviews and during his December hosting job on Saturday Night Live, he adheres to a strict no-fun policy while on set. “Usually if it feels like fun, it ends up not being very good,” the actor told The Hollywood Reporter about working on Manchester.

With acclaim raining down, Casey Affleck tries to enjoy it

Affleck once again brought his grouchy, critical self to an interview, this time with the Associated Press. “I have to live with that resume that you see on IMDB, which is full of dog s***,” he told the AP, adding that building concrete steps in Cambridge as a teen was more satisfying than most of the movies he’s worked on. Michelle Williams and Casey Affleck in a scene from ‘Manchester By The Sea.’

What others said about the film

Casey Affleck, Matt Damon, and John Krasinski teamed up to create what film critics are calling a ‘masterpiece’

The Sundance Film Festival is where the magical feedback started raining in for Manchester, with critics immediately falling in love with the film and making early predictions of Oscar glory. Whether the film takes any awards home Sunday, it certainly has lived up to the hype in the eyes of many.

Manchester by the Sea is an emotional, bleak treasure, critics say

Affleck gets career reprieve with Globe win for Manchester

After Affleck captured the Golden Globe for Best Actor, the AP’s Andrew Dalton proclaimed the win as a turning point for a career marred by small parts in forgettable films and years of playing second fiddle to his older brother, Ben.

Not everyone regarded Affleck’s career renaissance as a good thing. Actress Constance Wu (ABC’s Fresh off the Boat) was one of a number of people who brought up a pair of sexual harassment lawsuits against the actor that were settled out of court. Through a series of tweets, the actress suggested that Affleck bought his way out of trouble with the settlements and that the Academy valued strong acting over human decency by nominating him.

Even Jimmy Kimmel had something to say about Affleck and his performance, though it had more to do with his ongoing “feud” with Matt Damon than Affleck’s actual acting. “I would love it so much if you won an Oscar for a role that Matt opted out of,” Kimmel said, referring to Damon’s passing the role on to Affleck due to scheduling conflicts. “How sweet would that be?” Casey Affleck and Lucas Hedges in a scene from ‘Manchester By The Sea.’

Manchester by the Sea scores big with six Oscar nominations

Just like 2015’s Spotlight, Manchester by the Sea earned six Academy Award nominations. And just like Spotlight, Manchester was considered the odds-on-favorite for Best Picture for months until an awards powerhouse supplanted it late in the year (La La Land for Manchester, The Revenant for Spotlight). Will Manchester be able to pull off a similar upset? Only time will tell.

Casey Affleck, Michelle Williams, and Kenneth Lonergan had all received previous Oscar nominations before they earned nods for Manchester by the Sea, but for 20-year-old Lucas Hedges, it was a new experience. Naturally, he was pretty excited.

Casey Affleck wins Golden Globe for Manchester by the Sea

After earning major hardware from the Critics Choice Awards, the National Board of Review Awards, and many others, Manchester seemed poised to continue its award season dominance when the nominations for the Screen Actors Guild awards were announced in December, earning the most nods out of any film. Ultimately, however, Manchester came up empty at the SAGs, going 0-4. 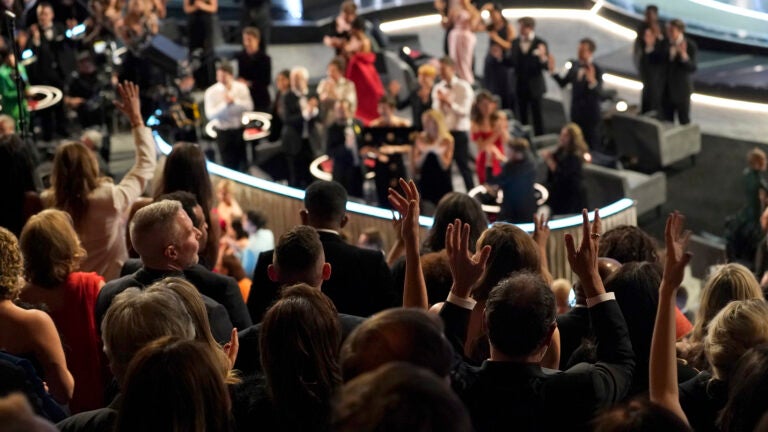