NEW YORK — Chris Evans has a theory about tap dancing. “Tap is waiting to have its day,” he said one recent afternoon, sitting in a Tribeca hotel clubhouse around the corner from an apartment he’s been renting since last month. Evans, or Captain America, as he’s been known in omnipresent Marvel movies for the better part of a decade, tapped as a child and still has sincere reverence for the form. His theory is that tap dancing today, like competitive hip-hop dancing in the early 2000s, is generally undervalued and ripe for a comeback.

“If you walk down the street and you see someone tapping,” you stop in your tracks, he said, using an unprintable word, “because it’s awesome.”

Twice a week since he’s been living in New York, Evans, who ordinarily splits his time between his native Boston and Los Angeles, has taken refuge in tap, clearing his mind and working up a sweat in private lessons taught by a friend. The lessons aren’t preparation for any role in particular, although Evans is hard at work on a pivotal one: his Broadway debut, as a charming but manipulative cop in Kenneth Lonergan’s “Lobby Hero,” which is now in previews and opens Monday at the Helen Hayes Theater.

The dancing, rather, is just a low-pressure new hobby (“It makes me feel like I’m a part of the music,” Evans said.) Along with the play, and the move to a new city, it’s one component in an ad hoc but inevitable process — not quite a rebirth, more like a reorientation — designed to help the 36-year-old actor answer a nagging question: What do you do with your life after walking away from the role of a lifetime?

Since 2011, the year “Captain America: The First Avenger” was released, Evans’ face (and torso, and biceps) has signified a marketable mix of principled strength and rank-and-file virtue as reliably as any in Hollywood. He was a working-class revolutionary in the dystopic thriller “Snowpiercer,” a stoic defender of the public school system in the indie family drama “Gifted,” a cunning spy who risks everything to save a persecuted minority in the soon-to-be-released “The Red Sea Diving Resort.”

And then there are the Avengers movies, in which the nobility of Evans’ character is so unimpeachable that entire plotlines turn on the ticks of his moral compass. In the Tribeca lounge, Evans volunteered his own stereotype: “Taciturn men who are leaders, selfless and magnanimous.”

Last year, he filmed back-to-back the final two Marvel movies for which he is under contract — “Avengers: Infinity War,” due in April, and a sequel planned for next year. For now, he has no plans to return to the franchise (“You want to get off the train before they push you off,” he said), and expects that planned reshoots in the fall will mark the end of his tenure in the familiar red, white and blue super suit. 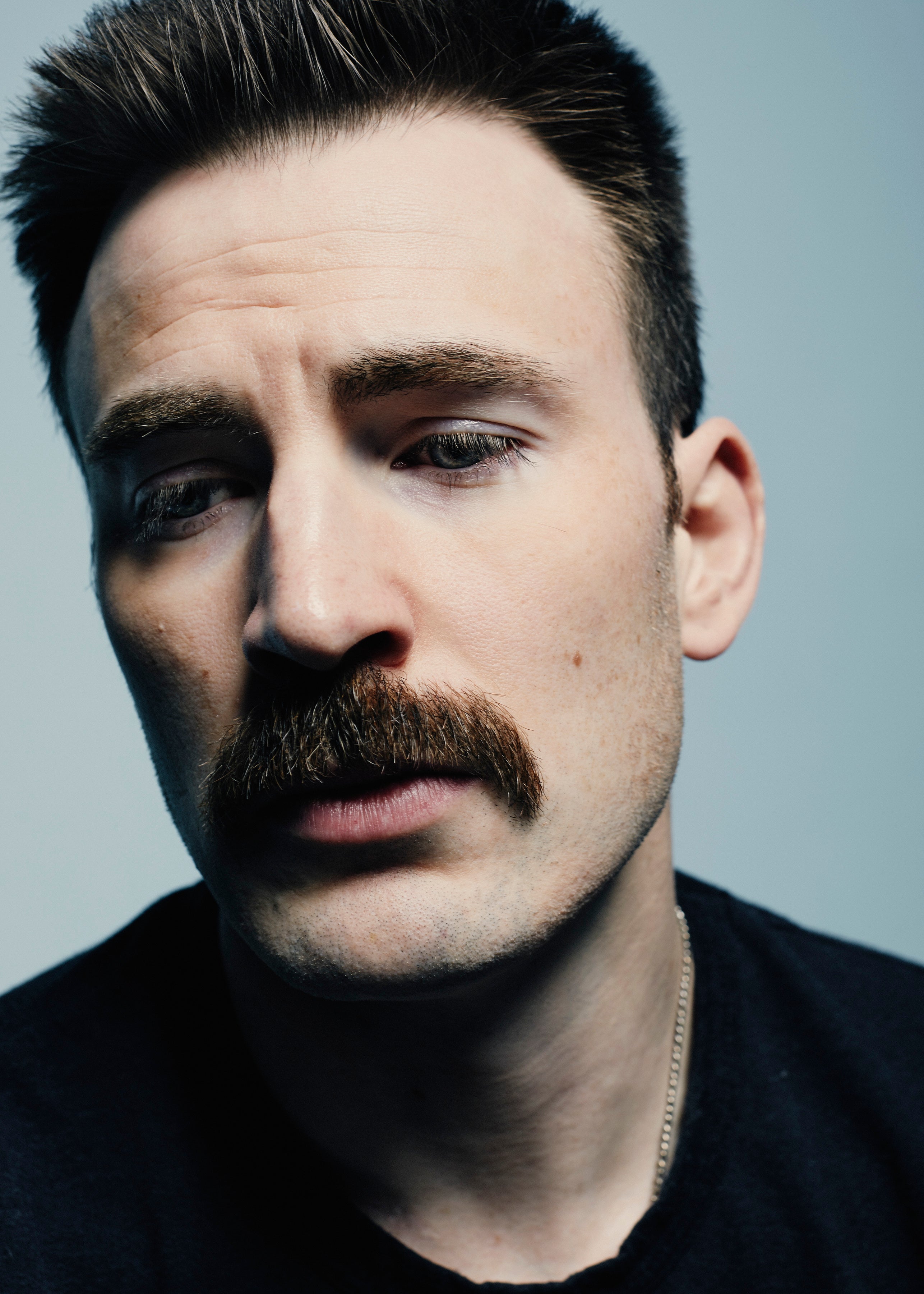 It was in the midst of shooting “Infinity War” that Evans signed on for “Lobby Hero.” Also starring Michael Cera, Brian Tyree Henry and Bel Powley, it inaugurates the nonprofit Second Stage Theater’s recently remodeled Broadway venue. The choice will give those wondering about Evans’ frame of mind plenty to chew on: His character, known only as Bill, is essentially a narcissistic creep, with a vision of protecting the innocent that lifts a warped mirror to the actor’s usual procession of do-gooders.

The play’s director, Trip Cullman, sent the script to Evans betting that the potential to subvert his image would be too enticing to pass up. “I had this inkling that he may not have had the opportunity to show what he can really do as an actor,” Cullman said. “A lot of actors are afraid to play someone unlikable, but I think he really has an egoless desire to serve the work.”

Though “Lobby Hero” is his Broadway debut, Evans is not a total stranger to the theater. He grew up in Sudbury, Massachusetts, outside Boston, in a family of performers: His mother was a dancer who later ran a children’s theater, his elder sister Carly studied drama at New York University and his younger brother Scott is a television actor who recently appeared on the Netflix comedy “Grace and Frankie.”

In high school, Evans balanced wrestling and lacrosse practice with Shakespeare, and was voted “most theatrical” after appearing in “A Midsummer Night’s Dream” and “The Winter’s Tale.” The summer before his senior year, he moved to New York to intern for a casting company and went back to Sudbury with his first agent. By graduation, he had landed a role on television, as one of three boys in a former all-girls school on the short-lived Fox drama “Opposite Sex.”

He spent the next several years playing a series of clean-cut hunks with an ambivalent relationship to their shirts: There was the shirtless jock in “Not Another Teen Movie,” the shirtless musician in “What’s Your Number?” and the shirtless flame-throwing superhero in two “Fantastic Four” movies, which put him in Marvel’s orbit.

In conversation, Evans is more thoughtful and grounded than his filmography might suggest. He is animated by the challenge of playing against type, but has no regrets over his previous roles and surprisingly little anxiety about future prospects.

“I used to have thoughts of wanting to climb to the top of something, or wanting to be somebody,” he said. “But when you get the thing that you think you want and then you wake up and realize that you still have pockets of sadness, and that your struggle will reinvent itself, you stop chasing after those things, and it’s liberating, because you realize that right here, right now, is exactly all I need.”

Evans was wearing the urban camouflage of a black NASA baseball cap with a cuffed brim pulled low. At around 6 feet tall, he is much less physically imposing in person than he appears on-screen, with the unassuming athleticism of the friend you forget does CrossFit until beach season comes around.

For the play, he recently grew a formidable mustache — a mighty rust-flecked horseshoe — and gained a super power of a different sort. “People don’t recognize me at all,” he said. “I can look them right in the eye — it’s like I’m invisible.”

“Lobby Hero,” which ran off-Broadway in 2001, follows several nights in the lives of four workers on the graveyard shift who are stratified by professional and social class. A pair of male security guards, one black and one white, have run-ins with a swaggering cop and his young female partner in the lobby of a Manhattan apartment building.

A queasy drama, replete with abuses of power and sexual coercion, unfolds between the male officer, played by Evans, and his partner Dawn (Powley). In the #MeToo era, when sensitivities to the plight of women in male-dominated institutions are especially raw, Evans’ scenes add live wires to the play’s emotional and political circuitry.

In an interview, Lonergan, the playwright, dismissed the notion that he had been prescient 17 years ago. (He has since gone on to a successful film career, writing and directing “Manchester by the Sea” most recently.) The play’s fresh resonance, he said, was an indictment of how little has changed in society.

“This isn’t new,” Lonergan said. “Anyone who’s shocked by these issues — I don’t know where they’ve been.” Cullman, the director, said he hoped “Lobby Hero” would further “expose toxic masculinity.”

“Kenny has given voice to Dawn’s predicament in such a compassionate and powerful way,” he said.

Evans’ newfound appetite for morally challenged characters has already been tested by Broadway’s eight-show-a-week routine. Two weeks into previews for “Lobby Hero,” he said it had felt more like two months.

But he’s prepared for the part with the fervor of the newly indoctrinated. Evans’ character is charismatic and often funny, and the actor devoted much of his rehearsal time to exploring how a man who is well liked can shade into reprehensible.

“He has the right instrument to bring the character to life,” said Cera, who worked with Evans on the 2010 film “Scott Pilgrim vs. the World.”

Cera pointed to one scene in which Bill threatens his partner. “The words on the page are menacing, but Chris made the choice to deliver them as if he himself is spinning out, which is much more frightening,” he said. “It reduced Bel to tears one night because it was so unexpected.”

The role has unexpectedly submerged Evans in questions of gender inequality and the distribution of power just as those same questions are roiling his industry.

The actor, who said he didn’t base his performance on anyone in particular (“It’s awful to admit, but I know plenty of guys who fit this mold”), has been studying how to better conduct himself as an ally to women in his profession.

One book he found eye-opening was Rebecca Solnit’s “The Mother of All Questions.” Evans read it while dating actress Jenny Slate (their on-again, off-again relationship, beloved by the internet, recently ended) and decided that he needed to listen more and speak less. “The hardest thing to reconcile is that just because you have good intentions, doesn’t mean it’s your time to have a voice,” he said.

As has become the norm for star-driven plays on Broadway, “Lobby Hero” has a limited run, through May 13. And while the show is as substantial a leap as any Evans has made professionally, it remains a kind of riff on his existing résumé. When it’s over, he’ll discover what it really means to be a film actor with Captain America’s face (and bank account), but without the job.

The last time he experienced anything similar was in 2016, when he took a year off from acting after wrapping the third Captain America film. Evans spent the time remodeling his house in Boston and bonding with his family. He visited his mother or sister every other day and marked the seasons with his nieces and nephews — apple picking, pumpkin carving, decorating a Christmas tree. He raised an adopted puppy — a regal mixed breed named Dodger — and became a regular at his local grocery store.

Evans said it was those slice-of-life domestic moments, rather than notions of any particular career path, that have most influenced his vision board.

“When I think about the times that I’m happiest, it’s not on a movie set,” he said, adding that he no longer wishes to make more than one film per year. “I’ve stopped thinking about my trajectory, or my oeuvre, or whatever pretentious word you want to use. I’m just following whatever I feel creatively hungry for.”

He wants to direct (his directorial debut “Before We Go” screened at the Toronto International Film Festival in 2014) and to start a family of his own. And, when he’s had his fill of tap dancing, he envisions many more hobbies, including sculpting and carpentry.