“She has something really strong and super unique,” Clarkson said on Tuesday night’s episode of the singing competition and reality show. “Brynn will be the youngest person ever to win this show. I didn’t say ‘could’ — I said ‘will.'”

Cartelli sang “Here Comes Goodbye” by Rascal Flatts against teammate Jamella during the knockout rounds. During a knockout round, an artist competes against a teammate while singing a separate song of his or her own choosing. Afterward, the teammates’ coach chooses the winner. In this instance, Clarkson picked Cartelli.

This season, the other “Voice” coaches are singers Adam Levine, Alicia Keys, and Blake Shelton.

After Cartelli’s performance, Shelton said, “The vibrato of your voice is just one of my favorite things I’ve heard this season. It’s awesome.”

Cartelli commented on social media after the episode, writing, “I am so speechless and mindblown that I am in the Top 24. Life is a dream.”

I am so speechless and mindblown that I am in the Top 24. Life is a dream. Thank you @kelly_clarkson … and thank you @rascalflatts for creating that song. It is beautiful. Thank you #TeamBrynn ❤️ #VoiceKnockouts @NBCTheVoice

Now Cartelli will move to the live playoffs, which begin April 16. Two other Massachusetts residents, Taunton native Mia Boostrom and Berklee College of Music student Jackie Foster, have also made the next round of the competition. 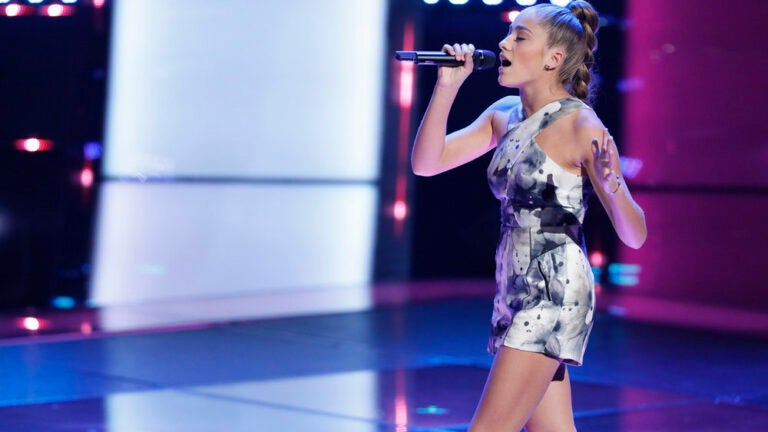