At first glance, Sunday’s Non Sequitur comic strip just showed bears dressed up like Leonardo da Vinci. The syndicated strip opens with Bear-Vinci holding a picture of a Virtruvian Bear. It ends with the ursine artist painting a Mona Lisa, who is also, you guessed it, a bear. They are all characters in the “Bearaissance,” and the format invites readers to color in the drawings.

But much like da Vinci himself, Wiley Miller, whose work often tackles politics and has occasionally drawn controversy, inserted a secret message into his latest work. Hidden at the bottom right corner of the second panel, beneath a drawing of the Italian inventor’s flying machine, a semi-legible scribble appeared to read, “Go f*** yourself Trump.”

The Butler Eagle, a family-owned newspaper north of Pittsburgh that syndicated Non Sequitur, decided to pull the strip on Monday after an irate reader alerted the newspaper.

“One of our readers has a young daughter who reads the comics. This family sits down with this comic, and they stumble across this hidden message,” Ron Vodenichar, the paper’s publisher and general manager, told The Washington Post.

He said the newspaper has been publishing the comic for a few years and received Non Sequitur in a package with other syndicated comic strips that was already laid out. The decision to pull the comic, Vodenichar said, was about the profanity and “has nothing to do with who it was aimed at.”

According to the comic strip’s publisher, Andrews McMeel Syndication, Non Sequitur goes out to more than 700 newspapers, including The Washington Post, which ran Sunday’s comic in print and online. A spokesperson for The Post did not immediately comment.

“We are sorry we missed the language in our editing process,” the company said “If we had discovered it, we would not have distributed the cartoon without it being removed. We apologize to ‘Non Sequitur’s’ clients and readers for our oversight.”

Miller, who frequently criticizes President Donald Trump on his Twitter feed, says he forgot all about the scribbled profanity until Sunday.

“When I opened the paper Sunday morning and read my cartoon, I didn’t think anything of it, as I didn’t notice the scribbling that has now caught fire,” Miller told The Post, noting the scribble had been done several weeks ago at a time when he was frustrated by a White House action and forgot to remove it.

“It was not intended for public consumption, and I meant to white it out before submitting it, but forgot to. Had I intended to make a statement to be understood by the readers, I would have done so in a more subtle, sophisticated manner,” he said.

But on Sunday, he still teased the “Easter egg” in the Non Sequitur comic on Twitter, inviting people to look for a message.

Some of my sharp-eyed readers have spotted a little Easter egg from Leonardo Bear-Vinci. Can you find it?

GoComics, which hosts Miller’s comics, had replaced the original cartoon with a version without the Trump insult by Monday afternoon.

This is not the first time a cartoonist has come under scrutiny for their political work in the Trump era. Last year, the Pittsburgh Post-Gazette fired editorial cartoonist Rob Rogers, who had been critical of the president in his work. The move earned a rebuke from Pittsburgh Mayor Bill Peduto, though a spokesman for the Post-Gazette insisted to The Post the firing had “little to do with politics, ideology or Donald Trump.”

Editorial cartoonists such as Bill Bramhall, Ann Telnaes, Mike Luckovich and others frequently comment on the Trump administration through their art.

Non Sequitur won the National Cartoonists Society’s Reuben Award for Outstanding Cartoonist of the Year in 2014. Launched in 1992, the comic has gone through several iterations since.

“I developed the strip to go into any direction my creativity would take me,” he told The Post in a 2014 interview. “[It’s] very open-ended. It’s like creating a new strip all the time.”

“I’m always trying to push things,” when it came to his art form, he said. “I haven’t had to apologize yet.”

Miller has faced controversy before for his work. In 2010, some newspapers decided not to run one of his cartoons depicting Muhammad, the founder of Islam who is seen as a prophet and holy figure by members of the religion. (The Post ran the edition online, but not in print.)

“All I can do is surmise that the irony of their being afraid to run a cartoon that satirizes media’s knee-jerk reaction to anything involving Islam bounced right of their foreheads. So what they’ve actually accomplished is, sadly, [to] validate the point,” he told The Post at the time.

On Monday, however, Miller was more apologetic. “In all that time, I have never done anything like this, nor do I intend to do so in the future,” he said. 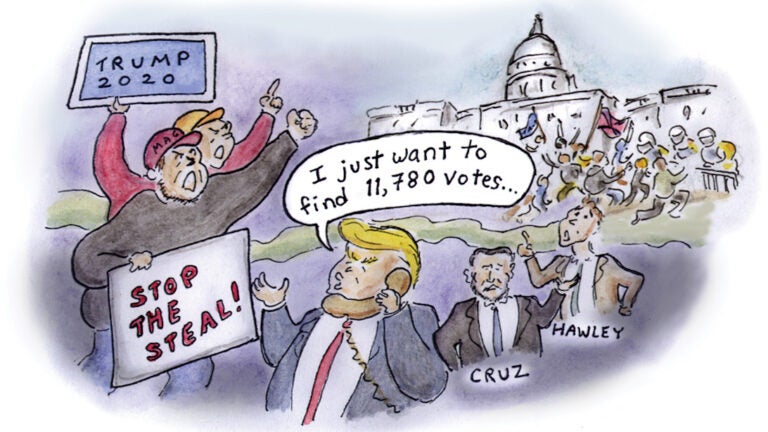