The handmaids had been sent good weather.

Dozens of them stood in front of the Lincoln Memorial on an unseasonably warm mid-February morning, wearing deep red cloaks and pristine white bonnets. A handful stretched out on the ground because it was almost noon, and they had been there since 4:30 a.m. In the memorial’s central chamber, cameramen prepared to shoot a scene of the dystopian Hulu series “The Handmaid’s Tale.”

“No problem with sitting down,” an assistant director said over a speaker to the extras on the Mall. “Just make sure you’re not sitting on your capes.”

As the handmaids loitered, Washington residents and eager tourists went about their days. A woman wove through the sea of red and up to the eternized president, accompanied by a pair of panting golden retrievers. A jogger rushed past armed men playing members of the show’s secret police force and yelled to her friends, “Did you not take a picture of me with the Eyes?” A few young children left their mother’s side and wandered toward the handmaids, mesmerized by the unusual garments. Security guards shielded star-struck visitors from getting too close but kept a nearby path open to avoid the wrath of the National Park Service.

It was a darkly comical sight, given the gravitas of the handmaids’ fictional existence. The characters originated in Margaret Atwood’s 1985 novel, in which a totalitarian, Christian fundamentalist society called Gilead seizes control of the United States and forces fertile women into childbearing enslavement. Hulu’s adaptation burst onto the scene a few years ago, and the red clothing has since become a symbol of political resistance.

Handmaids and regular folks have commingled in the nation’s capital before — it generally just means there’s some sort of protest going on, whether at the Women’s March or outside the Senate hearing of a soon-to-be Supreme Court justice. But these handmaids were the real deal, as confirmed by the presence of Emmy-winning lead actress Elisabeth Moss, seen sitting next to executive producer Warren Littlefield in a shady corner. 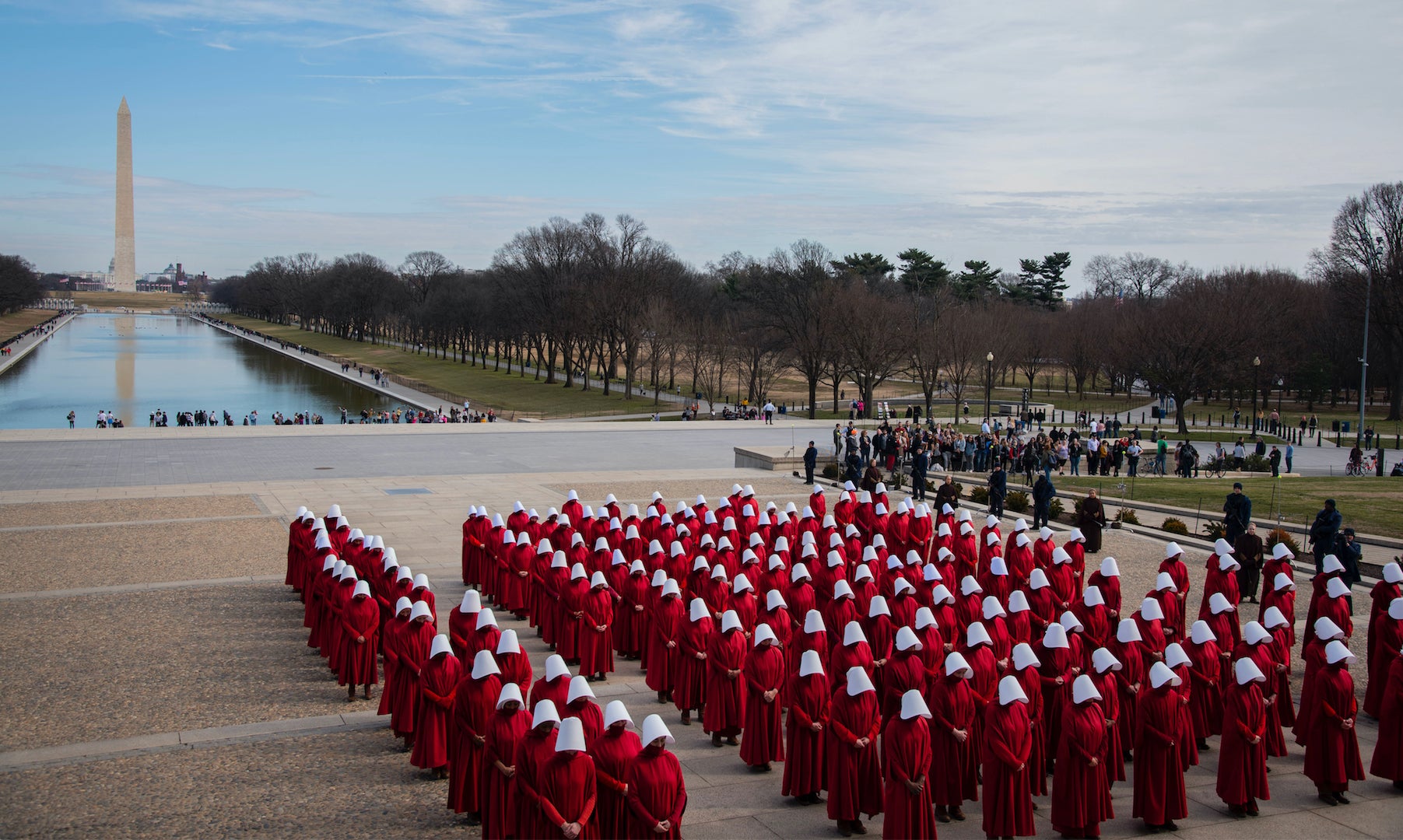 The Hulu series “The Handmaid’s Tale” on location on the National Mall in Washington, D.C., on Feb.15.

Moss and co-stars Joseph Fiennes and Yvonne Strahovski usually shoot in Toronto but came to town for two pivotal scenes from the show’s upcoming third season, set to premiere in June. Gilead’s capital remains in Washington, and the visual drama of the Mall, especially when gazing across the reflecting pool and up at the Washington Monument, lends itself to the show’s bleakness. In the show, according to producers, the monument will appear as a cross, Lincoln will literally be blasted out of his chair and hundreds of CGI handmaids will be stationed down the memorial’s steps and along the reflecting pool.

The second season of “The Handmaid’s Tale” follows pregnant handmaid June (Moss) as she lives under the close watch of Gilead commander Fred Waterford (Fiennes) and his wife, Serena Joy (Strahovski), in Boston. June gets separated from her family in the first season, and she’s now expected to give the Waterfords her newborn. They treat her horrifically, epitomized in a scene where the commander rapes June in an attempt to induce labor. Serena holds June down during the assault.

The answer depends on your personal agony threshold, of course, but the show has never pretended to serve as a form of escapism. By bringing immense suffering to your living room, “The Handmaid’s Tale” also serves as a reminder, as Fiennes said in a phone call after the shoot, to remain wary of what society could become.

Fiennes found it “somewhat strange and ugly” to preach Gilead’s oppressive ideology in front of a memorial representing the “high ideals of American values.” Strahovski, who had also filmed another scene with Moss earlier that morning, said in a separate phone call that she felt like she was “really on the wrong side” while standing on the steps in rich teal garments, the color worn by Gilead commanders’ complicit wives.

“I kept looking at Lizzie in her handmaid outfit feeling, like, ‘Oh, if you stood here in a red handmaid’s outfit, you’d feel better about it,’ because it’s a symbol of resistance, really,” Strahovski said. “It’s really incredible to have people feel inspired by that image.”

But those who don’t watch “The Handmaid’s Tale” probably felt confused that day on the Mall. Among the local actresses who played the handmaids were two women who had previously worked together on the Amazon series “Jack Ryan.” Asked how they wound up in Gilead, one of them responded that she had submitted her information to a casting call she found on Facebook, and “they got back to me and asked if we wanted to be — what are we? Not bridesmaids. We’re . . . ”

“. . . handmaids,” the other answered. They both laughed, hurrying back to their assigned spots after an assistant director instructed all the extras to do so. “Hands clasped, as you do,” he said. “Heads down. If you’re looking at the person’s feet in front of you, that’s probably a good lineup, so we don’t see your eyes.”

As the handmaids got in formation, Park Service employees held tourists back from climbing the stairs. It was especially tricky to shoot on location, producer Kim Todd said, as they were allowed to film for only about 10 uninterrupted minutes before having to let people in again: “They wouldn’t let us move the Lincoln Memorial or reroute the planes” overhead, she joked.

Todd, who handles the day-to-day business on set, stood in the corner and watched the live camera footage on a trio of monitors. The screens showed Moss from the back, descending the memorial’s steps to stand, and then kneel, between Fiennes and Strahovski. As Fiennes began to speak to the dozens of handmaids before him, a police siren went off.

“Planes give us the same problem,” she said. “But nothing can roll off a siren. It pierces. They’re made to do that, right? So you can’t ignore them.”

Fall 2021 TV preview: Premiere dates for all of the best new and returning shows