This season’s second episode of “Saturday Night Live” plunged headfirst into impeachment during its cold open (above), staging an emergency session in the offices of Vice President Mike Pence.

The veep (played by Beck Bennett) convened a meeting with Rudy Giuliani (Kate McKinnon) and Attorney General William Barr (Aidy Bryant), as all three weighed the possibility of President Donald Trump being removed from office.

The commander-in-chief was nowhere in sight. “He has more important things to deal with,” explained Bennett’s Pence. “He’s meeting with an alligator breeder about filling the moat at the border.”

Matthew Broderick then entered playing Mike Pompeo, staging a “Ferris Bueller’s Day Off” of his own after being subponeaed by Congress. He’d evaded testifying with the help of a not-mightily-convincing, mechanized version of himself.

After a brief stop-in by Ben Carson (Kenan Thompson), who appeared baffled by his current role in the administration, the group discussed its options for getting out of their current bind.

“We need to close ranks, like the Mafia,” opined McKinnon’s Giuliani, also noting they could find a way to trace everything back to rapper Tekashi 6ix9ine (currently testifying against his former gang in a high-profile trial).

“Except the Mafia was like smart, they didn’t go on Fox News and tell people the crimes before they did them,” replied Broderick’s Pompeo. Before exiting, he got another “Ferris Bueller” reference in: “Impeachment moves pretty fast. If you don’t stop and look around, you might miss it.”

Trump’s senior policy adviser Stephen Miller, taking the form of a snake in a basket, also weighed in, suggesting they spin the story in a more positive light.

But before the serpent could convince Bennett’s Pence one way or another, McKinnon’s Giuliani returned from a guest spot on Sean Hannity’s talk show. Donning clown makeup in reference to this week’s controversial “Joker” film, the adviser copped to killing Hannity while on the air. 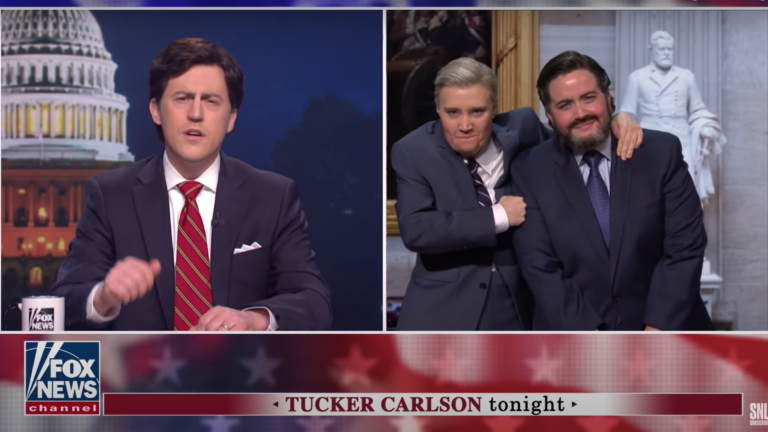