It’s been a while since Adam Sandler lived in New England, but the longtime Manchester, N.H., resident received a hometown welcome Sunday in Boston.

Wearing a green T-shirt with “Wicked Smaaht” on the front, Sandler and the rest of the group introduced the film to a packed audience then returned for a post-screening Q&A with former Celtics player Brian Scalabrine. Also in attendance were Celtics owners Wyc Grousbeck and Steve Pagliuca, assistant coach Jay Larranaga, and players Enes Kanter, Jayson Tatum, and Tacko Fall.

“Uncut Gems,” which lands in theaters Christmas Day and has already generated awards buzz, centers on a Manhattan jeweler named Howard Ratner (Sandler) who is always in search of his next big score. As he juggles unpaid debts — and the goons hired to make sure he pays them — an impending divorce, and a crippling gambling addiction, Ratner has his eyes on the prize: a rare uncut black opal he hopes to sell to Garnett, who plays himself. (The movie takes place in 2012 during the Eastern Conference Semifinals series between the Celtics and Philadelphia 76ers.)

Adam Sandler and Kevin Garnett at ArcLight Cinemas in Boston for the “Uncut Gems” premiere.

The character is a departure for Sandler, who has built a lucrative career starring in movies he produces and fills with actor pals like Rob Schneider, David Spade, and Kevin James. To prepare for this role, he met with people who got themselves into trouble because of their gambling addictions.

“They discussed what would go through their head, and how there was no stopping,” Sandler said. “Once the little thing in your head says ‘You gotta get going,’ there’s no turning back.”

Nevertheless, Sandler admitted there was at least a small part of himself reflected in the character.

“If you ask either one of my kids, they’ll inform you of how psychotic I am,” Sandler said. “There’s movie daddy, and then there’s this sick man who screams at the screen every time one of his teams is losing.”

While the Safdie brothers always had Sandler in mind for the film, other versions of the script had different NBA players in Garnett’s role, including Amar’e Stoudemire, Joel Embiid, and Kobe Bryant.

“We were looking at a list of recently retired players, and Kevin was on there,” Josh Safdie said. “And my Knicks fandom eclipsed my basketball intelligence. It was like, ‘I don’t want him anywhere near the movie.’”

The plot ends up being perfectly tailored to Garnett, whose onscreen self becomes convinced that Ratner’s opal is the key to his on-court success.

“Having something that you believe in and is giving you something back, I connected with that,” Garnett said before listing off some of his real-life game-day superstitions, including pre-game PB&J sandwiches, a $2 bill he always tucked in his shoe, and a locker-room episode of “Family Guy” before every game.

Garnett also said he prepared for his role the same way he would prepare for an NBA game, saying he “found cinema and sports very similar.”

“I felt very compelled to the responsibility to the character,” Garnett said. “I’m playing myself. … Who can play Kevin Garnett other than me?”

Afterwards, the group headed to ArcLight’s lobby for a post-screening reception. Sandler initially moved around the room chatting with friends, but as the crowd swelled, he settled into one corner, taking photos with anyone who could reach him.

It was more of the same as Sandler headed for the doors a bit before 11 p.m., with fans streaming out of TD Garden and swarming him in the street before he could reach a waiting car. One fan went so far as to briefly block Sandler’s car while asking for an autograph, then chased it for three blocks down Causeway Street, attempting again and again at each red light.

The extreme response would be no surprise to the Safdies, who regarded Sandler as a hero growing up.

“We grew up with this guy,” Josh Safdie said. “He brought so much heart, dedication, and humor to the movie. I’m telling you, I could sit up here and quote all the tracks off of his first two comedy records right now.” 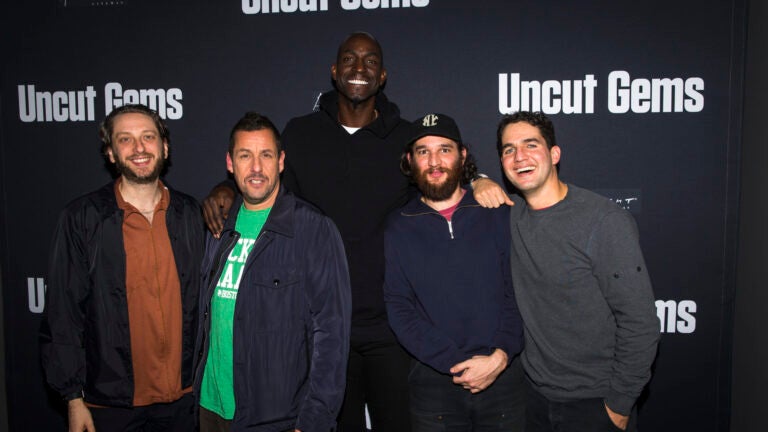