Adam Sandler has a history of playing pickup basketball wherever and whenever he can. So naturally when he did a movie with Kevin Garnett, the longtime New Hampshire resident jumped at the chance to shoot around with the Big Ticket.

Sandler and Garnett stopped by “Jimmy Kimmel Live!” on Tuesday to discuss their upcoming movie “Uncut Gems,” which hits theaters Christmas Day, as well as their time together on set.

In the film, which takes place in 2012, Sandler plays a Manhattan jeweler named Howard Ratner who thinks he’s found his next big payday when Garnett (who plays himself) becomes obsessed with Ratner’s uncut black opal.

Garnett said that, while they didn’t have much time between long days of shooting, the duo still got some shots up.

“There’s a basket on the set,” Garnett said. “So when we would get done with these long days or in between takes, we would go out [and] shoot around.”

Sandler secretly had higher hopes, though.

“It was a dream of mine to maybe, after work, show up at a park and play 2-on-2,” Sandler said. “And say, ‘Let me call my friend Kevin to play with me.’ It would have been amazing.”

“If you had said that, I probably would have showed up,” Garnett replied.

Garnett wasn’t the only acting novice in “Uncut Gems,” with directors Josh and Benny Safdie filling the cast with first-timers. Julia Fox, who plays Ratner’s mistress, made her feature film debut, as did numerous tough guys hired by Arno (Woburn native Eric Bogosian) to shake down Ratner for unpaid debts.

According to Sandler, one scene in which the hired toughs are supposed to rough up his character didn’t go as planned.

“A lot of the scenes I did with guys — it was their first time doing it — and they were supposed to smack me around,” Sandler said. “The stunt coordinator would say, ‘You don’t have to actually hit Adam. You know, throw the punch at him or throw his head to the side, it’ll look like it. And they just stared at him like, ‘What the hell are you talking about? We’re gonna hit Adam. We have to hit Adam. It says Hit Adam in the script.'” 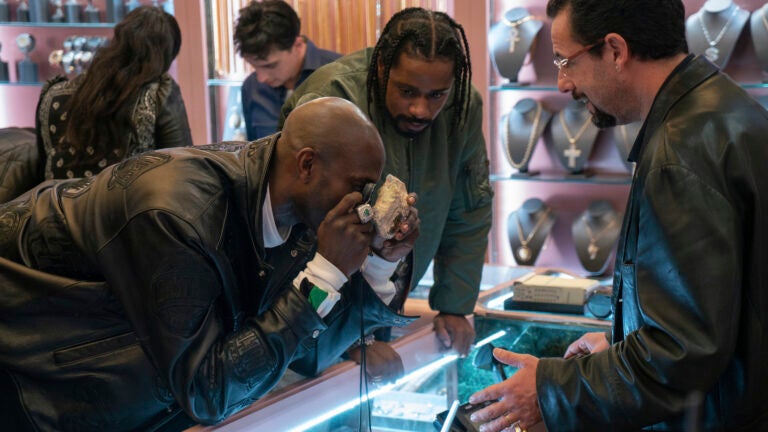 What critics have to say about ‘Uncut Gems’