“Just like ‘The Bachelor,’ the further we go, the less diverse it gets,” Gardner’s Woodruff said.

Woodruff introduced each candidate, starting with Kate McKinnon’s Elizabeth Warren: “I am in my element. PBS is my safeword.”

Bowen Yang’s Andrew Yang said his candidacy will be completely ignored by the media, so he put on a virtual reality headset: “In here, I’m the frontrunner.”

Colin Jost’s Pete Buttigieg warned the audience he would be in attack mode, “as long as that’s ok with you guys,” he said.

Rachel Dratch’s Amy Klobuchar entered with applause: “Tonight, my voice will be as solid as my carefully rehearsed midwestern mom jokes,” she said.

After the candidates were introduced, Woodruff asked if anyone wanted to “prove they are presidential” by starting a petty fight, segueing into the squall between Elizabeth Warren and Pete Buttigieg over the expensive California wine cave fundraiser that attracted national attention this week.

“I would just like to point out I’m the only candidate on this stage that isn’t a millionaire or billionaire,” Jost’s Buttigieg responded, before listing his mayors salary and a $20 weekly allowance as his sources of income.

“The only cave I ever go to is a man cave. I call it the Senate,” Dratch’s Klobuchar said.

Andrew Yang chimed in: “This is why we need more diversity on this stage.”

Maya Rudolph returned as Kamala Harris, who dropped out from the 2020 race earlier this month.

Sanders reiterated his focus on climate change. “Look at me. Are you really surprised my main concern is the temperature? No matter how hot the earth gets, I will not wear shorts. I swim in corduroys.”

Woodruff asked candidates to comment on beating President Donald Trump in 2020, before revealing the president was backstage the whole time, Jerry Springer-style. “Come on out, Mr. President,” Gardner’s Woodruff said.

“I brought you two gifts, Mr. President. They’re the articles of impeachment,” she said. “But here’s the thing. You know how sometimes you get a gift and you like it so much you just want to keep it as a gift for yourself? Good luck with the State of the Union.” 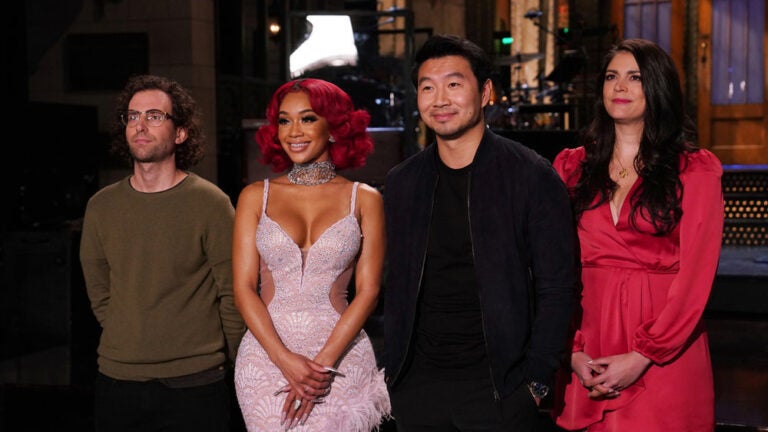 Highlights from Simu Liu’s stint as host of SNL