Nearly every facet of the life of Louisa May Alcott, author of “Little Women,” was inextricably tied to the Boston area. The setting of her classic novel about the March sisters was based on her own childhood home in Concord, which lives on today as Louisa May Alcott’s Orchard House. The author moved more than 20 times throughout her life, living both in the bustling city of Boston and on a remote utopian commune in the town of Harvard. Though she grew up poor, she was raised with a rich education thanks to family friends Henry David Thoreau and Nathaniel Hawthorne, among other seminal authors and thinkers of the era.

Despite this storied history, none of the numerous adaptations of Alcott’s novel used Massachusetts as a primary filming location until Greta Gerwig arrived in 2018 to film “Little Women.” The movie has received rave reviews, and it was named the top film of the year by the Boston Society of Film Critics.

“To shoot in Concord, in Massachusetts, in this area, in this environment, was really essential in how I wanted to build this movie,” Gerwig told the Boston Globe during a press day at Orchard House earlier this month. “It’s significant. The place matters as much as anything. The same way it was meaningful to shoot ‘Dunkirk’ at Dunkirk, it was meaningful to shoot this movie here.”

The film was shot in 11 Massachusetts municipalities, and a few of the sets were even built from scratch. The March family’s home, for example, was a temporarily erected house on a property in Concord, rather than the historic Orchard House. But other scenes were shot at historic residences around the region, many of which are open to visitors. (Earlier this month, Sony Pictures ran a “Little Women” scavenger hunt, which led visitors to a mix of filming locations and historic spots, almost all of which were within walking distance of Boston Common. The Massachusetts Film Office also released a “digital map” of filming locations.)

Gorman, who worked on other local projects in “Spotlight” and “Stronger,” said that filming “Little Women” was a joy.

“This was such a treat to work on because it’s a story most everybody in the area knows, and they just loved the fact that it was being done in Massachusetts,” Gorman said. “We featured a lot of great, historic houses in the area — a bunch run by the Trustees [of Reservations]. They were absolutely wonderful to work with, and I think they all got a thrill out of it, too.”

Here are some of the most significant locations used in the filming of “Little Women.”

Florence Pugh and Meryl Streep film a scene for “Little Women” at the Arnold Arboretum in Boston.

The Arnold Arboretum in Boston.

For the first time since its founding in 1872, the Arnold Arboretum was used for filming a motion picture. The sprawling arboretum provided the backdrop for a scene in which Amy and Aunt March ride a carriage through the dirt roads of Paris before spotting Laurie on the sidewalk.

While crews attracted some attention when filming took place on Oct. 31, 2018, many residents were focused on the Red Sox World Series victory parade, which was held the same day.

Saoirse Ronan in a scene from “Little Women” filmed at the Emerson Colonial Theatre.

The theater during renovations in 2017.

Filmmakers used the Emerson Colonial Theatre, Boston’s oldest continuously operated theater, for a scene in which Jo takes in a show in New York City. The Colonial Theatre recently completed a major restoration prior to the pre-Broadway premiere of “Moulin Rouge! The Musical.”

A scene from “Little Women” filmed at the Fairmont Copley Plaza in Boston.

The Grand Ballroom at the Fairmont Copley Plaza in Boston.

When Amy heads to a swanky New Year’s Eve ball in Paris, filmmakers used the Fairmont Copley Plaza’s Grand Ballroom. The hotel’s elegant architecture has caught the eye of filmmakers before, with the location also serving as a backdrop in movies like “American Hustle,” “Bride Wars,” and “The Firm.”

Filming for “Little Women” in Boston’s Back Bay in October 2018.

The Gibson House Museum in Boston.

Jo’s boarding house lodgings in New York City were filmed at the Gibson House Museum, a National Historic Landmark on Beacon Street in Boston’s Back Bay. Containing four floors of period-appointed rooms from the late nineteenth and early twentieth centuries regularly open for tours, the Gibson House also served as the home of Professor Bhaer (Louis Garrel) and Jo’s publisher, Mr. Dashwood (Tracy Letts), in the movie. (Other New York City scenes from the film were shot in Lawrence.)

Filmmakers turned back the clock outside the Gibson House as well, transforming several blocks of the Back Bay into 1860s versions of Concord and New York City. Gorman called it “a monster endeavor.”

“We were laying down all the dirt on top of the asphalt, removing all the parking meters, changing the street lamps so they look like they’re from the 1800s,” Gorman said. “But it looked beautiful on film.”

Emma Watson in a scene from “Little Women” filmed at the William Hickling Prescott House in Boston.

When Meg heads to the home of the wealthy Moffat family for a dance, she’s embarrassed to only have one dress — one that isn’t elegant enough for the high-society event, for that matter. To stage the scene, filmmakers turned to the William Hickling Prescott House, a five-story, federal-style property located on Beacon Street across from the Common.

Owned by the National Society of the Colonial Dames of America, the house is open for tours from mid-April through October.

Florence Pugh, Saoirse Ronan, and Emma Watson in a scene from “Little Women” filmed in Canton.

Acid-tongued Aunt March may not be the sisters’ favorite relative, but the sisters visit her on multiple occasions. For Aunt March’s home, filmmakers filmed inside and outside the Eleanor Cabot Bradley Estate in Canton, another Trustees property. Some of the wallpaper installed for filming still remains up in the house.

The estate’s grounds are open-year round, but regular tours inside are not currently offered.

The Laurence House in “Little Women.”

The March house in “Little Women.”

Alcott’s novel primarily takes place in Concord, so the town appears in multiple scenes in the new movie.

The original Orchard House was only used for a small portion of filming, however. The film’s crew didn’t want to disturb the carefully maintained historic property, so instead, filmmakers shot interior scenes of the home on a soundstage in Franklin, and built a replica on a plot of land on Lowell Road in Concord.

Filmmakers also put numerous characters in boats on the Concord River, using the Old Manse, the former home of both Ralph Waldo Emerson and Nathaniel Hawthorne, as a backdrop. This scene, along with footage filmed at Minuteman National Park, did not make the final cut, though.

As noted above, scenes that take place in the March house were filmed on a set built by filmmakers in Franklin. Crews set up camp in the Forge Park industrial area, where filming took place in fall 2018.

Saoirse Ronan and Timothée Chalamet in a scene from “Little Women” filmed in Groton.

During a crucial scene between Jo and Laurie, filmmakers opted to use the picturesque Gibbet Hill in Groton, which offers stunning views of the Nashua River valley. Historic barns located on Gibbet Hill now house a restaurant and an event space.

A scene filmed at Harvard Town Hall in “Little Women.”

When Meg visits the tailor to buy some beautiful fabric for a new dress she and her husband can’t really afford, filmmakers chose the Harvard General Store, giving it a makeover for filming.

In another scene, Amy is feeling left out when older sisters Jo and Meg head to the theater with Laurie and John. The scene was shot at Harvard Town Hall.

Emma Watson in a scene from “Little Women” filmed in Harvard.

Once Meg is married, she moves into a humble home with husband John Brooke, which is actually the Fruitlands Museum in Harvard. Alcott lived at the Fruitlands Farmhouse at one point in her life, and the grounds serve as a backdrop for several of the movie’s outdoor scenes.

A scene filmed at the Crane Estate in “Little Women.”

Castle Hill at the Crane Estate in Ipswich.

The Crane Estate in Ipswich stood in for multiple scenes set in Europe, with the rolling lawns descending from Castle Hill presented as Paris. The estate’s former chauffeur’s quarters were transformed into an artist’s studio for Amy, and multiple outdoor scenes were also filmed around the grounds, including in the estate’s Italian garden and rose garden.

The Crane Estate has been featured in other movies, including “The Witches of Eastwick,” “Flowers in the Attic,” and “The Equalizer.”

“Little Women” features two significant beachside scenes, both of which were filmed at Crane Beach in Ipswich. The sisters and their friends spend time enjoying the sea air, dipping their toes in the surf, and flying kites, not unlike modern visitors to the beach.

Laura Dern and Timothée Chalamet in a scene from “Little Women” filmed at the Thayer Estate in Lancaster.

The Thayer Estate in Lancaster.

The wealthy Laurence family are a benevolent force in the March family’s life, with Laurie a frequent companion of the sisters and grandfather Mr. Laurence (Chris Cooper) giving Beth a chance to play the piano at his palatial home whenever she wants. While filmmakers used a Concord home for exterior shots, the interior of the Laurence house was a mansion in Lancaster that’s currently on the market for $2.5 million. Built in 1904 by Guy Lowell (who designed the Museum of Fine Arts), the 47-bedroom, 24-bathroom home once served as a transcendental meditation retreat run by Deepak Chopra, attracting celebrity clients like Elizabeth Taylor and George Harrison.

Filmmakers also used the property to construct additional sets beyond the Laurence house, including one of several scenes set at a train station.

Crews transformed Appleton Street in Lawrence for filming of “Little Women” in 2018.

Along with scenes shot in Back Bay, filmmakers looked to Lawrence when recreating the feel of 1800s New York City. Crews used a pedestrian-only section of Appleton Street next to city hall, erecting signs on the brick buildings for period-appropriate businesses like a ladies millinery selling bonnets and “under clothing,” a piano and organ shop run by “Broadway Billy,” and the Knickerbocker Hotel.

Commuter rail riders may be confused as to why the Concord train station in “Little Women” doesn’t resemble its real-life counterpart. Instead, filmmakers used the Stoughton train station, whose wood-paneled interior has remained largely unchanged since it was first constructed in 1888.

Saoirse Ronan and Timothée Chalamet in a scene from “Little Women” filmed at the Lyman Estate in Waltham.

The Lyman Estate in Waltham.

Early in the movie, Meg and Jo head to a New Year’s Eve ball at the home of the wealthy Mrs. Gardiner. As Jo tries to avoid every man who looks her way, she ends up meeting Laurie, marking the beginning of a long, complex relationship.

For the home of the wealthy Gardiner family, filmmakers chose the Lyman Estate in Waltham. Also known as the “Vale,” this late-1700s home is available for tours, and also features historic greenhouses on the grounds. 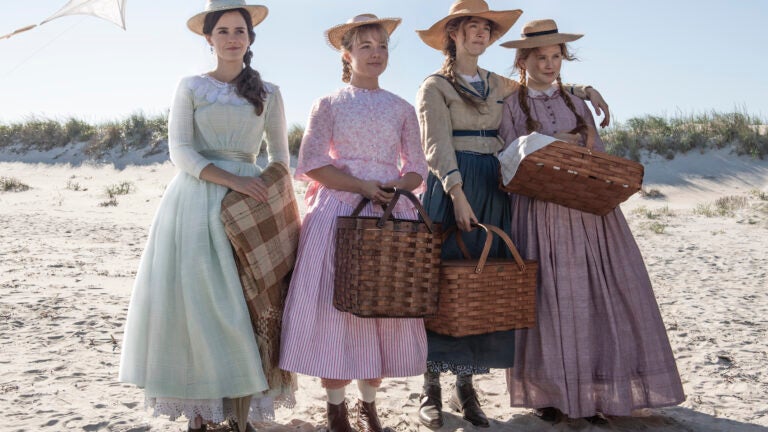 A ‘new classic’: What critics have to say about ‘Little Women’