After the Senate voted against adding new witnesses Friday in President Donald Trump’s impeachment trial, all but ensuring his acquittal, “Saturday Night Live” rewrote history in a cold open sketch: “The Trial You Wish Had Happened.”

Chief Justice John Roberts, played by Mikey Day, was swiftly replaced in SNL’s version of the trial. “I will be overseeing these proceedings with complete disinterest,” Day’s monotonous Roberts said.

“Like hell you will,” interjected Kenan Thompson as Judge Mathis. “This court needs a real judge who’s got some big brass ones under his skirt.”

Thompson’s Mathis called on Sen. Mitch McConnell, played by Beck Bennett, referring to him as “that sneaky little Mitch.” Bennett’s McConnell reminds the courtroom: “All men are innocent after proven guilty.”

Sen. Lindsey Graham, played by Kate McKinnon, files into the room declaring President Trump’s innocence: “I’ve studied my chances of getting reelected and it ain’t gonna happen unless I kiss Mr. Trump’s grits and tickle his biscuits.”

Judge Mathis then calls on witnesses: “because that’s how a damn trial works,” and former Trump advisor John Bolton, played by Cecily Strong, says he is deeply worried about the future of democracy. He also plugs his new book, “The Room Where It Happened: A White House Memior” under the fictional title, “Harry Potter and the Room Where It Happened.”

Hunter Biden, played by Pete Davidson, is the next witnessed called on, entering the courtroom through a vape cloud via hoverboard. “The President is just pointing at me to distract from his own crimes,” Davidson’s Biden says.

Bennett’s McConnell interrupts to plug an ad about coal: “A beautiful, clean way of the future,” followed by Graham with an ad about guns: “You can’t watch the Super Bowl without a gun.”

President Donald Trump, played by Alec Baldwin, is called on next, using a walker to approach the stand. “I’m a very sick old man. How could I withhold aid from the Ukraine? I can barely get around the house.”

Then, a Baldwin-Trump confession: “What I’ve learned from this trial is that clearly nothing I do or say has any consequences, so I’d like to come clean about everything.”

Baldwin’s Trump said the phone call with Ukraine was not perfect, illegal, “and frankly a butt-dial.” He said his least favorite states are Iowa, Michigan, Pennsylvania, Arkansas, and West Virginia. Baldwin’s Trump also said he cheats all the time “golf, taxes, wives, elections.”

“But this trial has been incredible because I now have a best friend, Mitch McConnell, he’s a ride or die (expletive).”

Thompson’s Judge Mathis finds Trump guilty on all charges, and forces him to say one nice thing about Speaker of the House Nancy Pelosi. 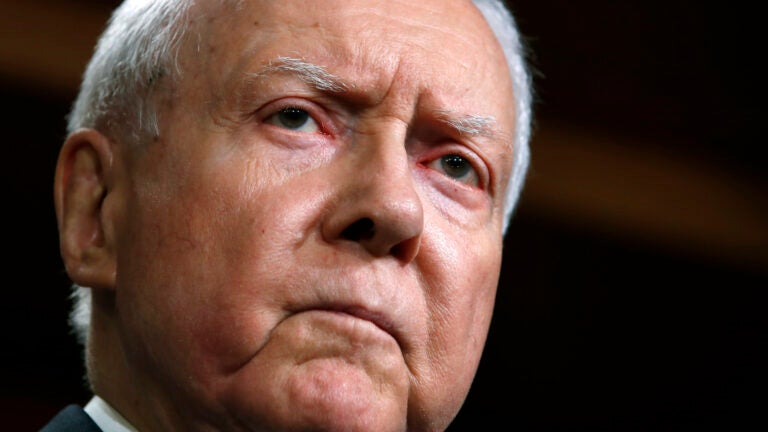