The 2020 Oscars may have lacked a host once more on Sunday night, but the ceremony wasn’t short on memorable moments, monumental upsets, and heartfelt speeches.

The show concluded with a wholly unexpected Best Picture win for South Korean film “Parasite,” a shock victory that marked the first time a foreign film has won the award. The award was the film’s fourth, including an upset win for the film’s director, Bong Joon Ho.

“I will drink until next morning,” the director said as he finished his speech. “Thank you.”

Here are the biggest moments of the ceremony, from the pre-show red carpet to the final award.

See the biggest looks on the Oscars red carpet

Hollywood braved a bout of Los Angeles rain for the 2020 Academy Awards, sporting eye-catching outfits as celebrities made their way into the Dolby Theatre.

Natalie Portman and husband Benjamin Millepied at the 92nd Oscars.

Singer/actress Janelle Monae kicked off the 92nd Academy Awards with a tribute to “A Beautiful Day in the Neighborhood” and its subject, the late Fred Rogers. Monae then launched into a musical number highlighting several critically acclaimed films that didn’t get major awards love Sunday night, including “Midsommar,” “Dolemite is My Name,” and “Queen & Slim.”

The Oscars were once again without a host in 2020, but two former hosts stepped in to give the show a de facto opening monologue.

Steve Martin and Chris Rock touched on everything from the Iowa caucuses to the lack of Black nominees. The monologue also included a series of jokes about Amazon founder Jeff Bezos.

Brad Pitt criticized the impeachment proceedings during his acceptance speech

It didn’t take long for the 2020 Oscars to get political.

While accepting the first award of the night at the 92nd Academy Awards, actor Brad Pitt delivered a withering one-liner about the impeachment proceedings of Donald Trump, which ended in Trump’s acquittal last week.

Sir Elton John was in his element at the Oscars, performing the original song from the film about his life, “Rocketman.” Shortly afterward, the singer was awarded the Best Original Song Oscar for the song, standing alongside his longtime songwriting partner, Bernie Taupin.

“Thank you to Bernie who has been the constant thing in my life,” John said. “When I was screwed up, when I was normal, he’s always been there for me.”

In one of the biggest upsets of the night, Bong Joon Ho won the Best Director Oscar for his film “Parasite,” besting a field that included luminaries like Martin Scorsese (“The Irishman”), Quentin Tarantino (“Once Upon a Time in Hollywood”), and presumed frontrunner Sam Mendes (“1917”). With the aid of a translator, the South Korean filmmaker thanked all his fellow nominees, but gave special mention to Scorsese.

“When I was young and studying cinema, there was a saying that I carved deep into my heart, which is that, ‘The most personal is the most creative,’ he said. “That quote is from our great Martin Scorsese. When I was in school, I studied Martin Scorsese’s films. Just to be nominated was a huge honor.”

In what has become a recurring pattern during awards season, Joaquin Phoenix took home the top acting award for “Joker,” and accepted the award with an unconventional speech. Phoenix touched on a laundry list of issues while accepting the award, including a lengthy treatise on animal rights.

As the actor finished his speech, he became visibly emotional, choking up as he shared a song lyric written by his late brother, River Phoenix.

“When he was 17, my brother wrote this lyric,” Phoenix said. “He said, ‘Run to the rescue with love, and peace will follow.’ Thank you.”

The win was the film’s fourth of the night, with director Bong Joon Ho also winning Best Director over presumed frontrunner Sam Mendes (“1917”).

“I’m speechless,” producer Kwak Sin Ae said through a translator. “We never imagined this to ever happen. We are so happy. I feel like a very opportune moment in history is happening right now.” 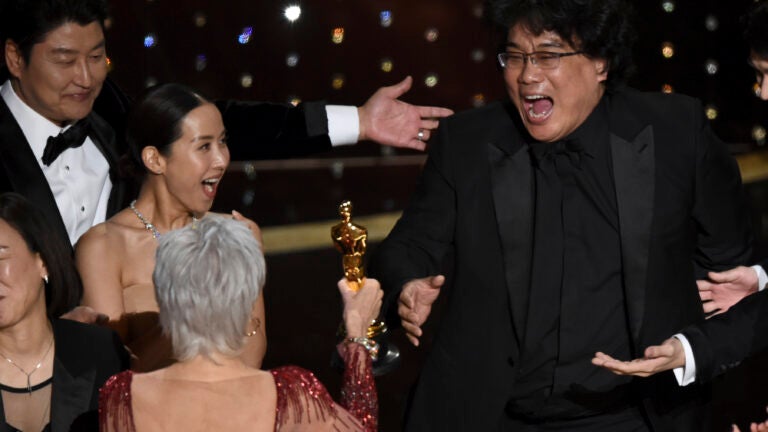