With both public and private institutions closing their doors in response to the coronavirus pandemic, now is the time to make a weekend date with your couch. With sports competitions canceled and a staggering number of shows available to stream across an increasing number of platforms, you might finally make a dent in that queue you’ve had building for months now. But what should you watch?

We won’t pretend that the following list of shows is the end-all, be-all for programs to watch; attempting to produce an all-encompassing viewer guide in the streaming era is a fool’s errand. Instead, we’ve curated a list of shows that spans genres and platforms that will satisfy any mood.

Marblehead native Rob Delaney and Irish actress Sharon Horgan blended comedy, pathos, and heart in “Catastrophe,” which concluded its four-season run in 2019. When Horgan’s schoolteacher gets pregnant after a one-night stand with Delaney’s American ad executive, the duo decides to raise the child, and watching the couple’s relationship evolve over four seasons is a journey worth taking.

How to Watch: “Catastrophe” is streaming on Amazon Prime.

“I Think You Should Leave”

Short on time? Stop lying — you’ve got nowhere to go. But if you’re looking for a quick laugh, “I Think You Should Leave” is a good bet. With only six episodes that run around 16 to 17 minutes each, you can watch this entire sketch series from former “Saturday Night Live” writer-performer Tim Robinson and former “SNL” writer Zach Kanin, a Newton native and former Harvard Lampoon president, in less time than it takes to watch most movies. “I Think You Should Leave” finds humor in the absurd, and leans heavily on protagonists who push well past the point of comfort before admitting that they’re wrong. It’s no surprise that the show has been called the “funniest Netflix show ever” and the “funniest show of 2019” by critics.

How to Watch: “I Think You Should Leave” is available to stream on Netflix.

Eugene Levy and Catherine O’Hara have a long history together, with the comedic actors first joining forces in the 1970s as members of the Second City improv troupe and playing an on-screen couple in movies like “Best in Show” and “A Mighty Wind.” So it makes sense that after 40-plus years of performing side by side, the duo are a riot in “Schitt’s Creek,” a Canadian comedy that follows a wealthy family who starting over in a tiny rural town they purchased as a joke before their money disappeared.
How to watch: “Schitt’s Creek” is streaming on Netflix.

Season one and season two of the Stephen King anthology series were filmed in Massachusetts, with the latter season featuring stars like Lizzy Caplan (“Mean Girls”), Tim Robbins (“The Shawshank Redemption”), Elsie Fisher (“Eighth Grade”), and Barkhad Abdi (“Captain Phillips”) playing numerous characters in the fictional town of Castle Rock. The characters no doubt will be familiar to fans of the King universe.

How to watch: “Castle Rock” is streaming on Hulu.

Showtime’s crime drama about 1990s Boston may be a work of fiction, but there are a number of real-life people and events driving the show’s narrative, which centers around an FBI investigator (Kevin Bacon, “Footloose”) and an assistant district attorney (Aldis Hodge, “Hidden Figures”) teaming up to take down a gang of armored car robbers. The show is slated to return for its second season later this year, and producer Ben Affleck and creator/producer Chuck MacLean hope to do for Boston what “The Wire” did for Baltimore over the course of at least five seasons, so it’s worth catching up now.

How to Watch: “City on a Hill” is available to stream on Hulu with a Showtime subscription.

In case “Castle Rock” weren’t enough King for you, this 10-part HBO miniseries is an adaptation of one of the author’s recent novels. What initially feels like a standard police procedural, with cops interrogating a baseball coach (Jason Bateman, “Arrested Development”) suspected of the rape and murder of an 11-year-old boy. But as so often happens in King’s world, things take a turn for the weird. Standout performances include Ben Mendelsohn (“Rogue One: A Star Wars Story”) as a detective with a personal connection to the case and Cynthia Erivo (“Harriet”) as the private investigator with an eye for the supernatural.

How to watch: “The Outsider” is streaming on HBO Go.

Alan Moore’s classic Cold War-era graphic novel about superheroes maintaining an uneasy peace as the world edges closer to apocalypse was already the subject of a disappointing 2009 film adaptation. But where director Zach Snyder failed — with uneven pacing and an attempt to squeeze excess source material into an already over-long running time — the new HBO series from Carlton Cuse (“Lost”) succeeds. Using the real-life Greenwood Massacre of 1921 as the catalyst for an entirely new story in the dark superhero universe, “Watchmen” is anchored by powerhouse performances from Regina King (“If Beale Street Could Talk”), Tim Blake Nelson (“Oh Brother, Where Art Thou?”), and Jeremy Irons (“The Lion King”) as exiled genius Ozymandias.

How to watch: “Watchmen” is streaming on HBO Go.

“The Joy of Painting”

Twitch is best known as a platform for live-streaming gamers, with teens across the world playing hours of games like “Fortnite,” “League of Legends,” and “Call of Duty” during every hour of the day. But Twitch is also the best place to watch countless episodes of “The Joy of Painting,” the ultra-relaxing painting show that originally aired on PBS in the ’80s and ’90s. Get lost in the landscapes of late host Bob Ross, as he serenades you with his soothing baritone and ASMR-worthy brush sounds. Accessing the Bob Ross Twitch channel is free, but if you’re interested in a little more control over which episodes you watch, the show is also available on other paid services.

How to watch: Visit the Bob Ross Twitch channel anytime from 3 p.m. on Fridays through 3 p.m. on Mondays. Also available on Netflix, Amazon Prime, Hulu, and Tubi.

Want to turn your brain off and forget about life for a while? Sure you do. Even better, want to turn your brain off while imagining yourself surrounded by lush lawns, verdant greenery, and blooming perennials? Then tune in to “Love Your Garden,” a British import on Netflix that takes host Alan Titchmarsh to the homes of fellow English folks whose gardens are in need of a transformation.

How to watch: “Love Your Garden” is streaming on Netflix.

“Tidying Up with Marie Kondo”

If you’re going to be stuck inside for an extended period, a tidy home will go a long way to maintaining your sanity. Sweeping the floors and cleaning every surface is one thing, but radically transforming your home through eliminating clutter is a difficult undertaking, and Marie Kondo can help you do it. Even if you’re comfortable with how your home is feeling, it’s immensely satisfying watching Kondo help the hoarders on her show transform their homes from hovels to homes.

How to watch: “Tidying Up with Marie Kondo” is streaming on Netflix. 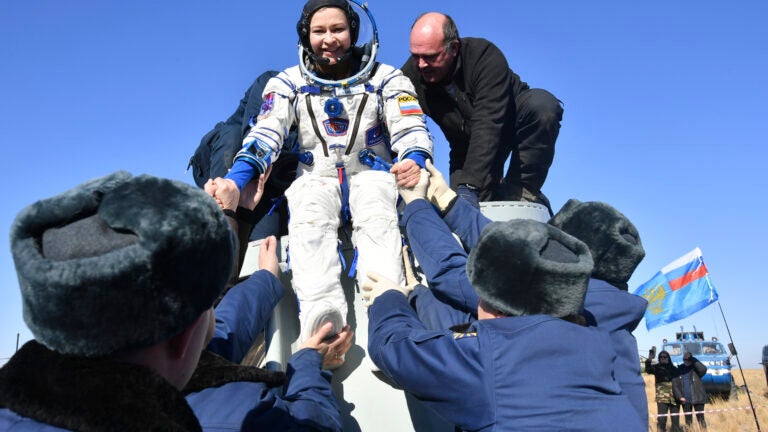