The film industry — just like pretty much every other industry in America — has been profoundly affected by the novel coronavirus outbreak, with theater chains currently shuttered nationwide.

The unprecedented closures have left film studios scrambling, leading to postponements across the board. The coronavirus pandemic has also pressed studios to release new movies on Video on Demand (VOD) almost immediately after their theatrical run, bypassing the typical 90-day waiting period after a title leaves theaters.

Ben Affleck’s new drama “The Way Back,” for example, hit theaters on March 7, but is expected to be available to rent on VOD and platforms like Amazon, iTunes, and Google on March 24. Disney-Pixar’s “Onward,” released the same day, hit VOD this past Friday. Universal also became the first major studio to scrap a theatrical run entirely for one of its planned wide releases, sending “Trolls World Tour” directly to VOD on April 10.

One caveat for consumers: Rentals of these movies will initially start at $19.99, and once rented, you will only be able to access the film for 48 hours.

Here’s a full list of recent wide-release movies that are currently (or soon to be) available to watch at home.

Plot: Teenage elf Ian Lightfoot (Tom Holland, “Spider-Man: Far From Home”) is a shy suburban loner surrounded by mythical creatures who long ago gave up or forgot the magic powers that were once prevalent in society. Desperate for guidance, Ian yearns to connect with his late father, whom he never met, while simultaneously shunning the mentorship overtures of his older brother Barley (Chris Pratt, “Guardians of the Galaxy”). When a spell gone wrong brings their father back to life as a disembodied pair of pants and shoes, the pair then embark on a quest to bring their father all the way back before time runs out.

How to watch: “Onward” is now available to rent through Video on Demand and on platforms including Amazon, iTunes, and Google Play, and will be available to stream for Disney+ subscribers on April 3.

Plot: Twelve strangers wake up in a clearing, unsure of how they got there. Soon, it becomes apparent they’re being hunted for sport by a group of wealthy elites. What they didn’t count on? One of The Hunted (Betty Gilpin, “Glow”) knows exactly what’s happening and turns the tables on them.

How to watch: “The Hunt” is now available to rent through Video on Demand and on platforms including Amazon, iTunes, and Google Play.

Plot: In the newest adaptation of the Jane Austen classic, Anya Taylor-Joy (“The Witch”) plays the titular queen bee, who is unimpressed and amused by the stultifying pageantry of the aristocratic class to which she belongs. Despite her detached state, Emma is soon thrust into the center of a number of romantic entanglements and misunderstandings, with the possibility of true love dangling at the end of it all.

How to watch: “Emma” is now available to rent through Video on Demand and on platforms including Amazon, iTunes, and Google Play.

Plot: Trapped in a controlling relationship with wealthy mad scientist Adrian Griffin (Oliver Jackson-Cohen, “The Haunting of Hill House”), Cecilia Kass (Elisabeth Moss, “Mad Men”) escapes with the help of her friends and goes into hiding. When Adrian seemingly commits suicide and bequeaths her a fortune, Cecilia suspects his death is a hoax, a suspicion quickly aided by an invisible man who sadistically tries to drive her insane.

How to watch: “The Invisible Man” is now available to rent through Video on Demand and on platforms including Amazon, iTunes, and Google Play.

Plot: Jack Cunningham (Ben Affleck) is a former high school basketball phenom who has settled into life as a construction worker with alcohol addiction. Every moment of Jack’s life seems to center around drinking, which has caused problems with his estranged wife (Janina Gavankar, “Blindspotting”), his sister (Michaela Watkins, “Wanderlust”), and his health. When his alma mater offers him a chance to coach the school’s underperforming squad, both Jack and the team hope to turn around their fortunes.

How to watch: “The Way Back” is now available to rent through Video on Demand and on platforms including Amazon, iTunes, and Google Play.

How to watch: “The Gentlemen” is now available to rent through Video on Demand and on platforms including Amazon, iTunes, and Google Play.

Plot: Based on the bestselling comic book of the same name, Vin Diesel (“The Fast and the Furious”) plays Ray Garrison, a soldier recently killed in action and brought back to life with nanotechnology implanted in his body by a shadowy corporation planning to use him as a weapon. Ray soon realizes his memories and thoughts aren’t really his own, and goes on a mission to figure out what’s real and what isn’t.

How to watch: “Bloodshot” is now available to rent through Video on Demand and on platforms including Amazon, iTunes, and Google Play.

“Birds of Prey and the Fantabulous Emancipation of One Harley Quinn”

Plot: In another addition to the DC Comics Universe, Harley Quinn (Margot Robbie, “I, Tonya”) takes a shot at playing a hero of sorts for a change when narcissistic Gotham villain Roman Sionis (Ewan McGregor, “Star Wars: Episode One — The Phantom Menace”) puts a hit out on a young girl named Cass. Quinn is joined by her own squad of female antiheroes as they team up to take Roman down.

How to watch: “Birds of Prey and the Fantabulous Emancipation of One Harley Quinn” is now available to rent through Video on Demand and on platforms including Amazon, iTunes, and Google Play.

Plot: Billed as “an inspiring love story for the ages” by Lionsgate, “I Still Believe” is based on the life of Christian music star Jeremy Camp, and named after one of his songs. The film centers on the struggles of a young Camp (KJ Apa, “Riverdale”) and then-fiancee Melissa (Britt Robertson, “A Dog’s Purpose”) after she discovers she has ovarian cancer.

How to watch: “I Still Believe” will be available on Video on Demand on March 27.

Plot: In a film starring the popular video game character of the same name, Sonic (Ben Schwartz, “Parks and Recreation”) is a super-fast hedgehog who is hiding out in a remote town in the Pacific Northwest from those who hope to harness and exploit his powers. When he inadvertently attracts the attention of the U.S. government and the eccentric scientist Dr. Robotnik (Jim Carrey, “Dumb and Dumber”), he teams up with the small town’s sheriff (James Marsden, “Hairspray”) to recover his lost rings and escape to a safer dimension.

How to watch: “Sonic the Hedgehog” will be released on Video on Demand on March 31.

Plot: In this romantic comedy that’s now headed directly to Netflix instead of theaters, young couple Jibran (Kumail Nanjiani, “The Big Sick”) and Leilani (Issa Rae, “Insecure” ) face a defining moment in their relationship when they are suddenly entangled in a murder mystery. The duo face extreme obstacles in the effort to clear their name, and their relationship is put to the test.

How to watch: “The Lovebirds” will be available on Netflix on April 3.

Plot: In a sequel to the 2016 animated hit, Poppy (Anna Kendrick, “Pitch Perfect”) and Branch (Justin Timberlake) discover that their tribe of trolls is only one of six different troll groups scattered across distant lands, with each devoted to a different type of music. When queen of the hard-rock tribe (Rachel Bloom, “Crazy Ex-Girlfriend”) attempts to destroy all other types of music to let rock reign supreme, the other five must team up to bring harmony to the land.

How to watch: Trolls World Tour” will be available on Video on Demand on April 10. 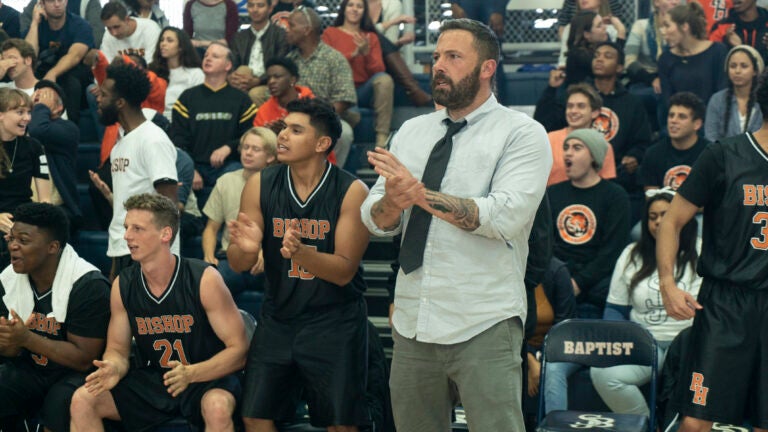