Celebrities: They’re just like us! Or at least, they all started off life with mothers, just like us. To commemorate this Mother’s Day, take a look at some of Greater Boston’s biggest names — from movies, TV, music and sports — with the most important women in their lives. 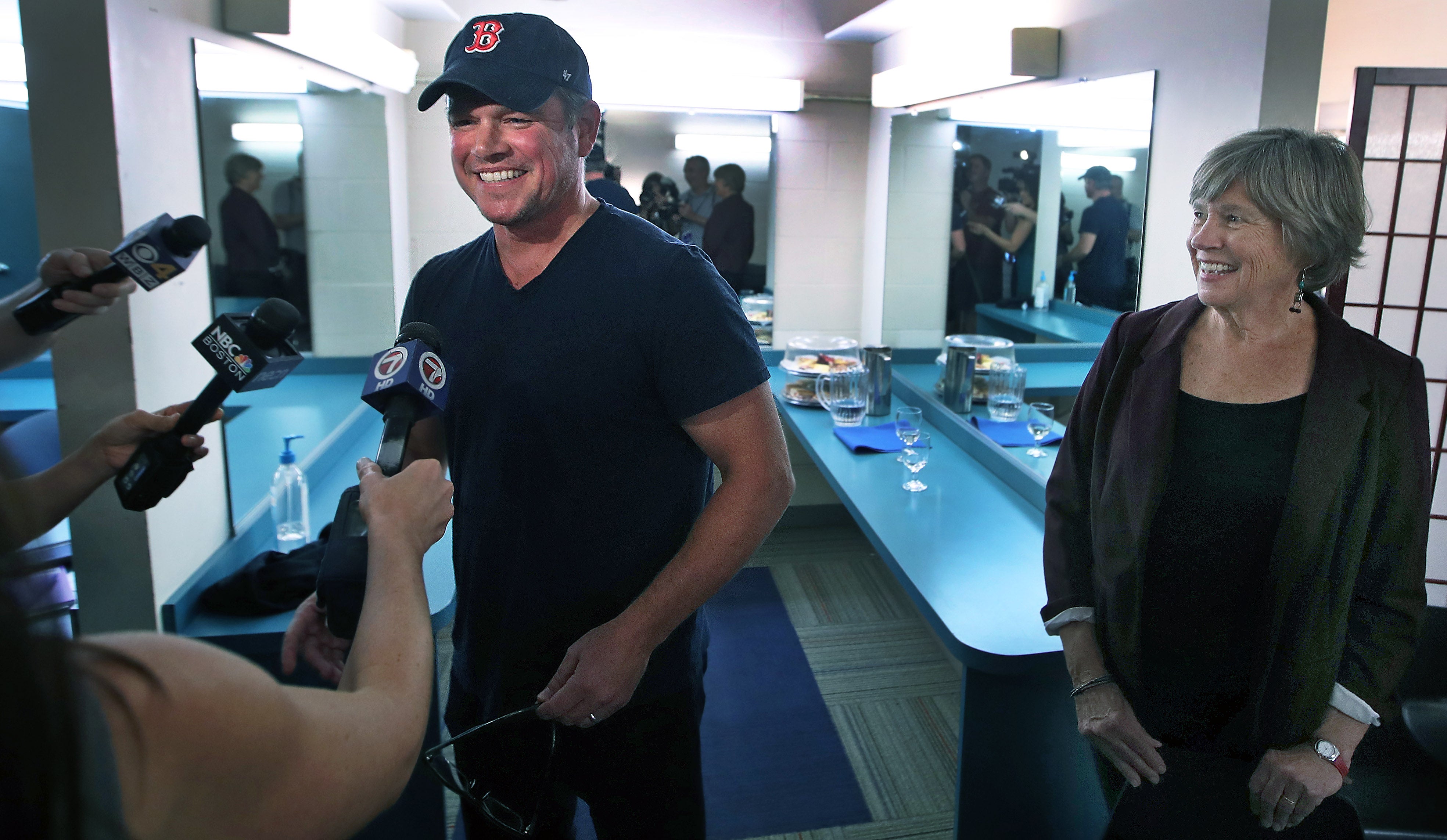 Matt Damon (left) and his mother Nancy Carlsson-Paige meet the press in the green room before the screening of the movie “Backpack Full of Cash” at the Wheelock Family Theatre at Wheelock College in September of 2017. 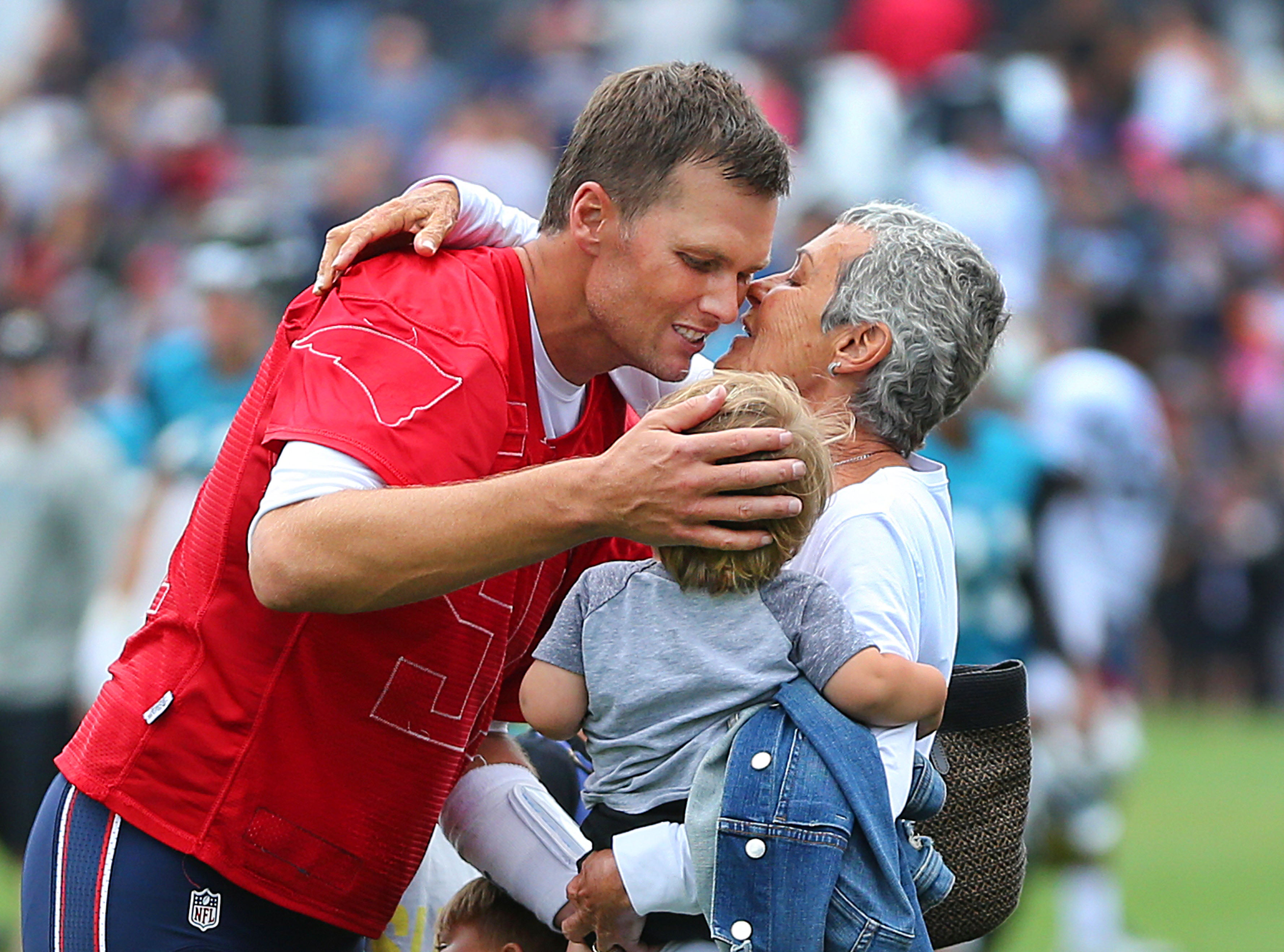 Back in those halcyon days when Tom Brady was still a Patriot – August of 2017, to be precise – the then-Pats QB gets a kiss from his mother, Galynn Patricia Brady, as she holds Tom’s nephew Ryan Bonelli at the end of practice. 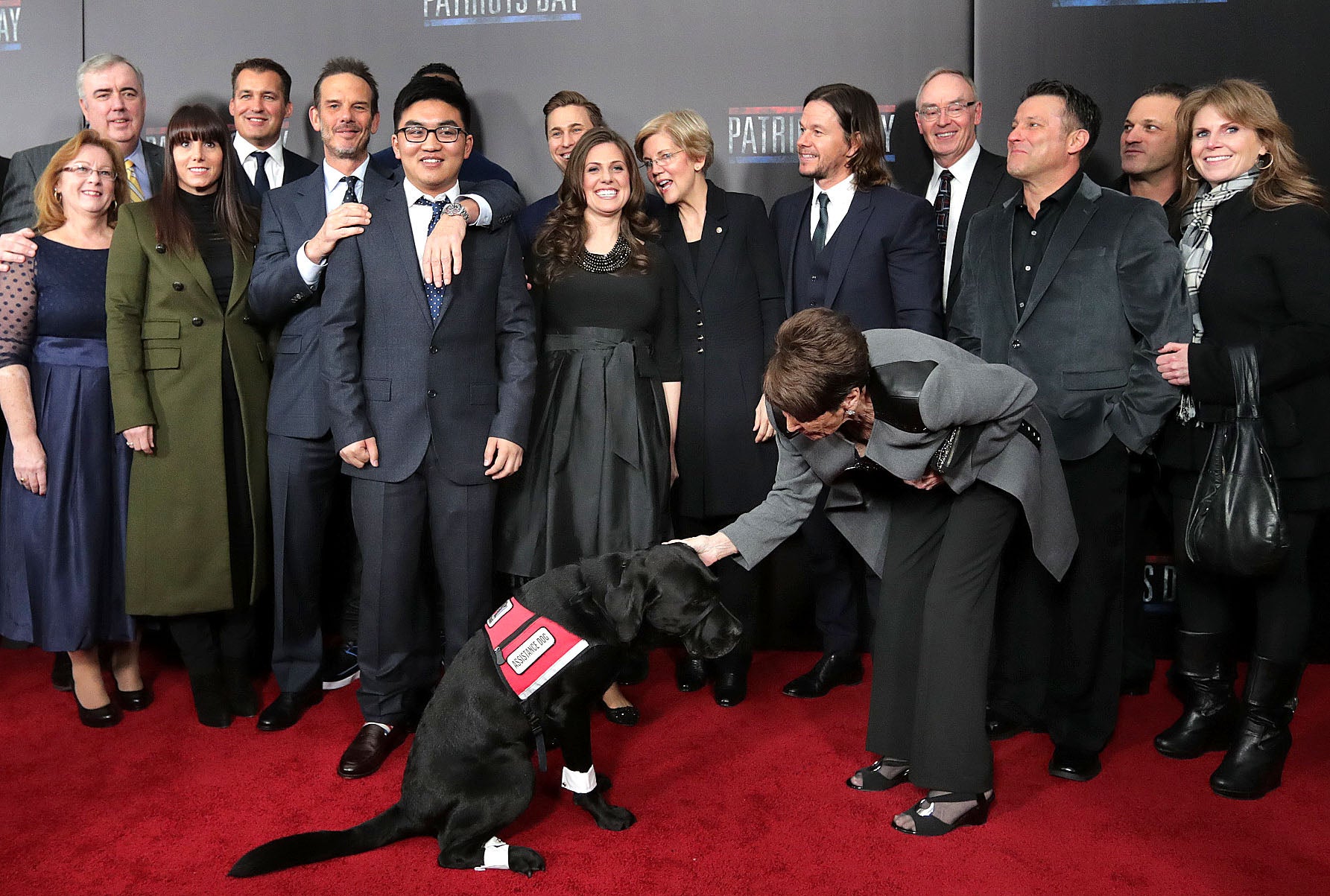 Mark Wahlberg’s mother, Elma (front, in front of Mark), greets Jessic Kensky’s service dog Rescue at the Boston premiere of the movie “Patriots Day” at the Boch Center’s Wang Theater in Boston in December of 2016. 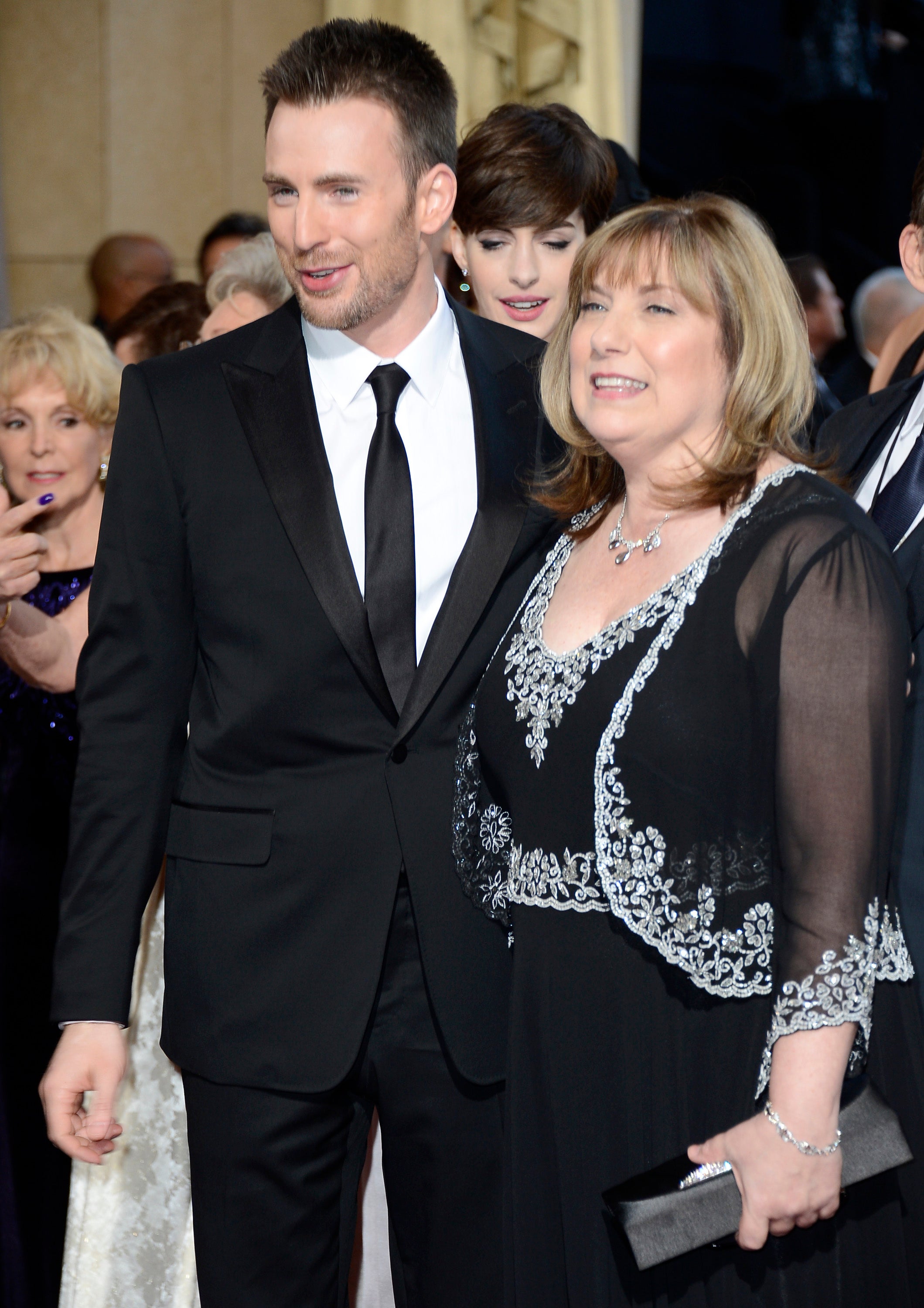 Rob Gronkowsi — that other now-former Patriot — paid tribute to his mother Diane Walters for her birthday with this Instagram post last September.

Happy Mother’s Day to the two incredible mothers who have shown me the meaning of love. Today I am making donations to two organizations in their honor: @cut50’s #DignityForIncarceratedWomen campaign, a national initiative to help reduce the prison population while making our communities safer, and @NationalBailout, an incredible organization that works with groups all over the country on Mother’s Day to bail out black moms and caregivers, provide supportive services and fellowship opportunities to help end money bail and pretrial detention. 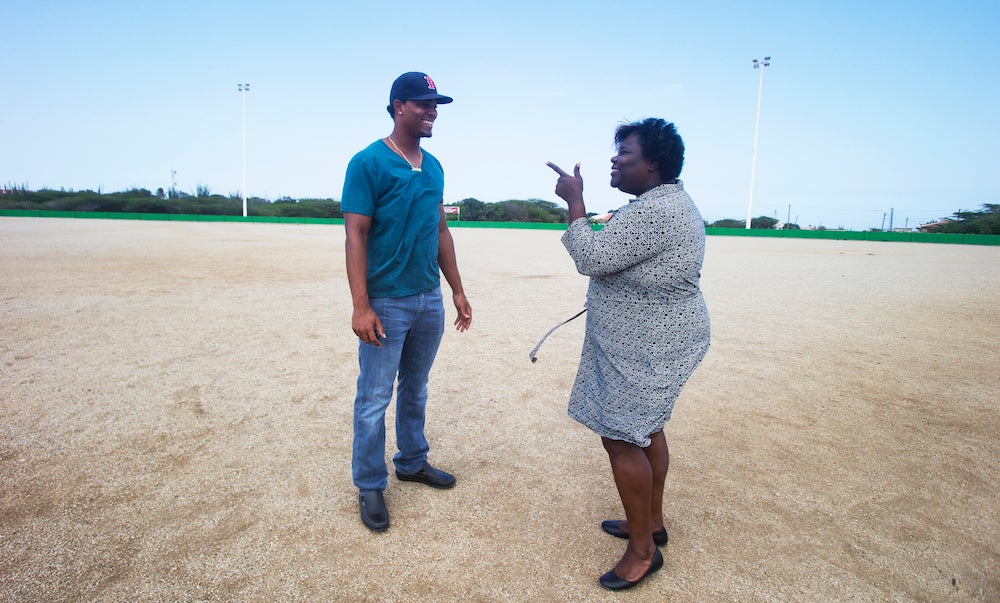 Red Sox infielder Xander Bogaerts listens to his mother, Sandra Brown, at the new ballpark named after him in November in his hometown in Aruba. 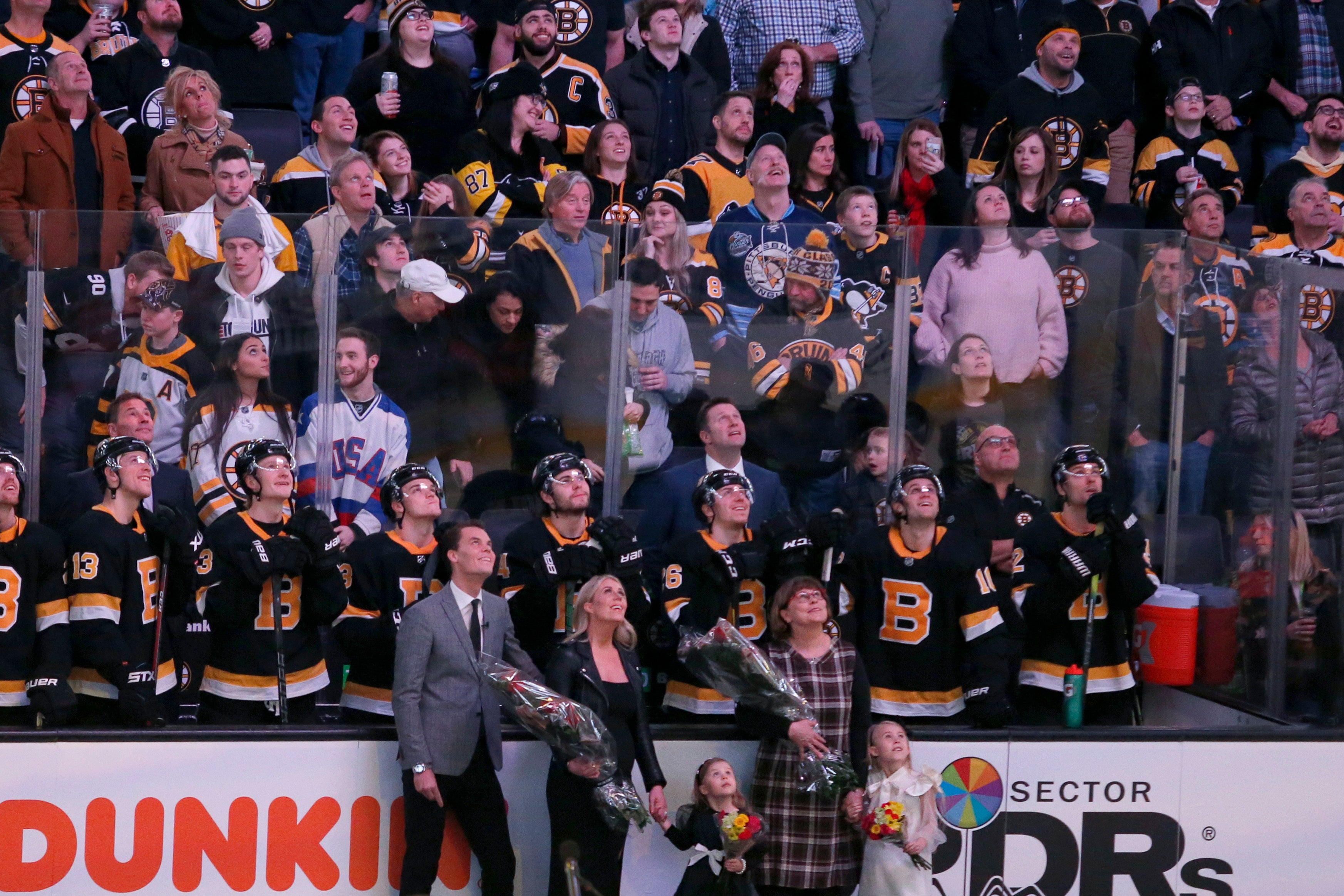 Boston Bruins goaltender Tuukka Rask watches a video tribute with his wife, daughters and mother as his teammates look on. Rask was honored for his 500th career game before the start of a game against the Pittsburgh Penguins  on Jan. 16. 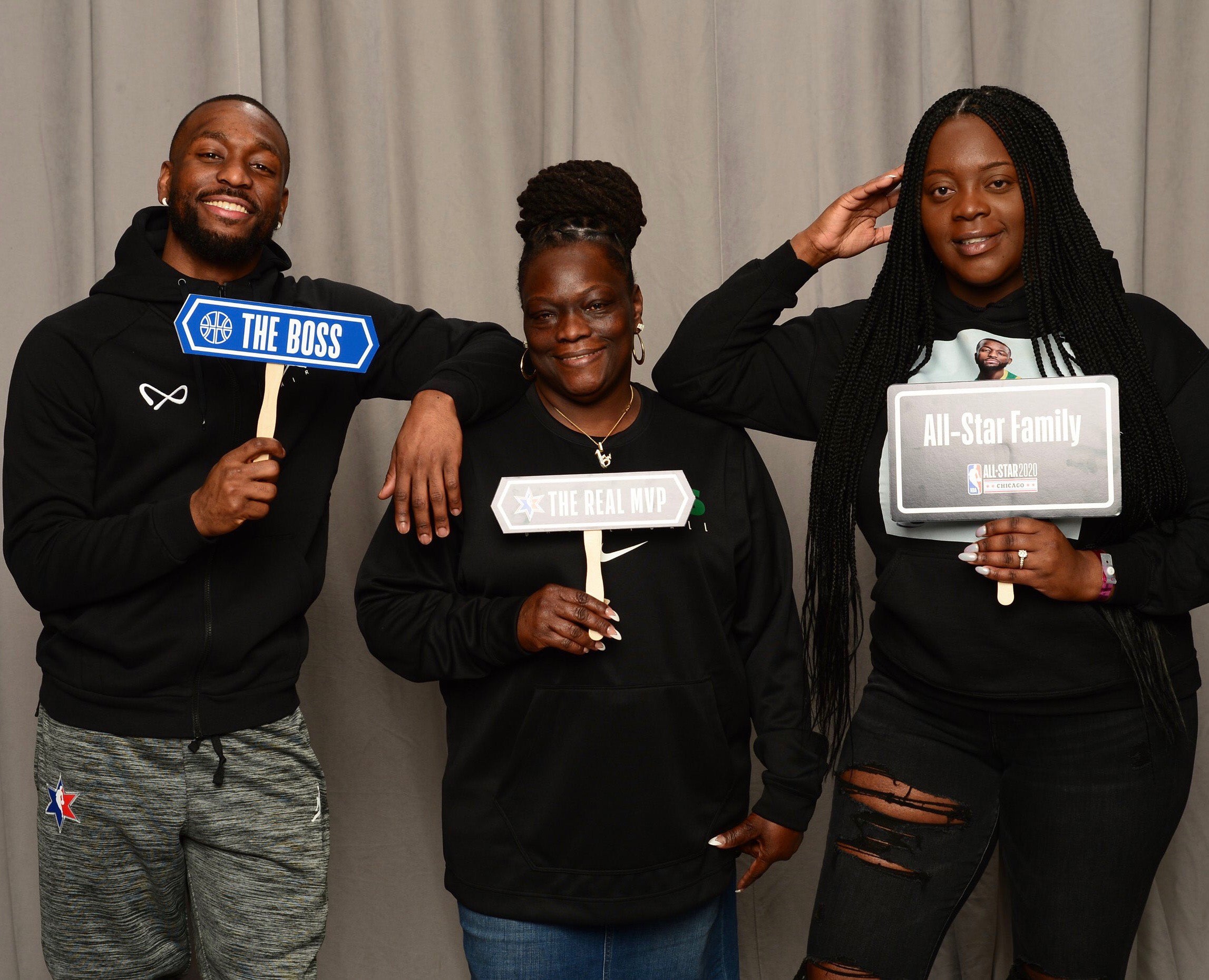 Kemba Walker of the Boston Celtics is shown with his mother Andrea Walker (center) and sister Sharifa Nesbitt in a handout photo at All-Star weekend in 2020.

We got incredible news yesterday for mom. The brain tumor has shrunk significantly. Shrinking a tumor of this size without surgery seemed like an uphill battle. We as a family also didn’t feel she was strong enough for radiation. Our team at cedars led by Dr. Rudnick gave her keytruda, avastin and some chemo. In about three months we saw the shrinkage in the photo you can slide to See. We also went to Baja medgate in Mexico for treatments, did vit c infusions, optune, did some body work and energy work, lots of supplements to counter the effects of avastin on the body as well as to keep her immune system strong. She also has been on a strict no sugar diet. No carbs. Clean vegetables and little meat. We also have used Dr. Anahid Jewett’s probiotic formula, Berberine,  Natural killer cells & nano ICG treatment. Im sure I’m missing something here as I am trying to get this out quick with a busy schedule. Lastly we have prayed-a lot. I share this so you can get a glimpse of what we did in case you are in a similar situation. If you listen to my podcast I share what we do with her on there throughout episodes. I’m so grateful to everyone who has treated her, and to all of you who have prayed. It has been a tough few months, after a challenging few years dealing with all these brain tumors BUT I will say it’s all been a great teaching and brought us closer together. My guiding words for this second tumor journey with mom have been “patience and faith.” Though difficult in moments, I always go back to them. They have served us well. Disclaimer: this entire plan has been catered for my mom and her specific circumstance, as each individuals treatment is so specific, but hope it helps show you what’s out there and working for us.

TV personality Maria Menounos of Medford has talked often about her mother, Litsa Menouno, and her battle with cancer, such as in this encouraging post from January.

Happy birthday to MY QUEEN 🎉💖 @kelliatrainor ICON ALERT! No one will every love me as much as this beautiful woman does 💯% just this year she has dropped everything and flown across the world for me, she has come on tour to stand in for JoJo when she hurt her foot, and dealt with insomnia for two months for me because she can’t sleep on a tour bus. She is not just my mother, she is my best friend and my number one supporter. I love you to the moon and back mom. Let’s make this bday the BEST🎉 San Jose Ima ask you to all sing happy birthday to her tonight. Her name is KELLI never forget😉💖